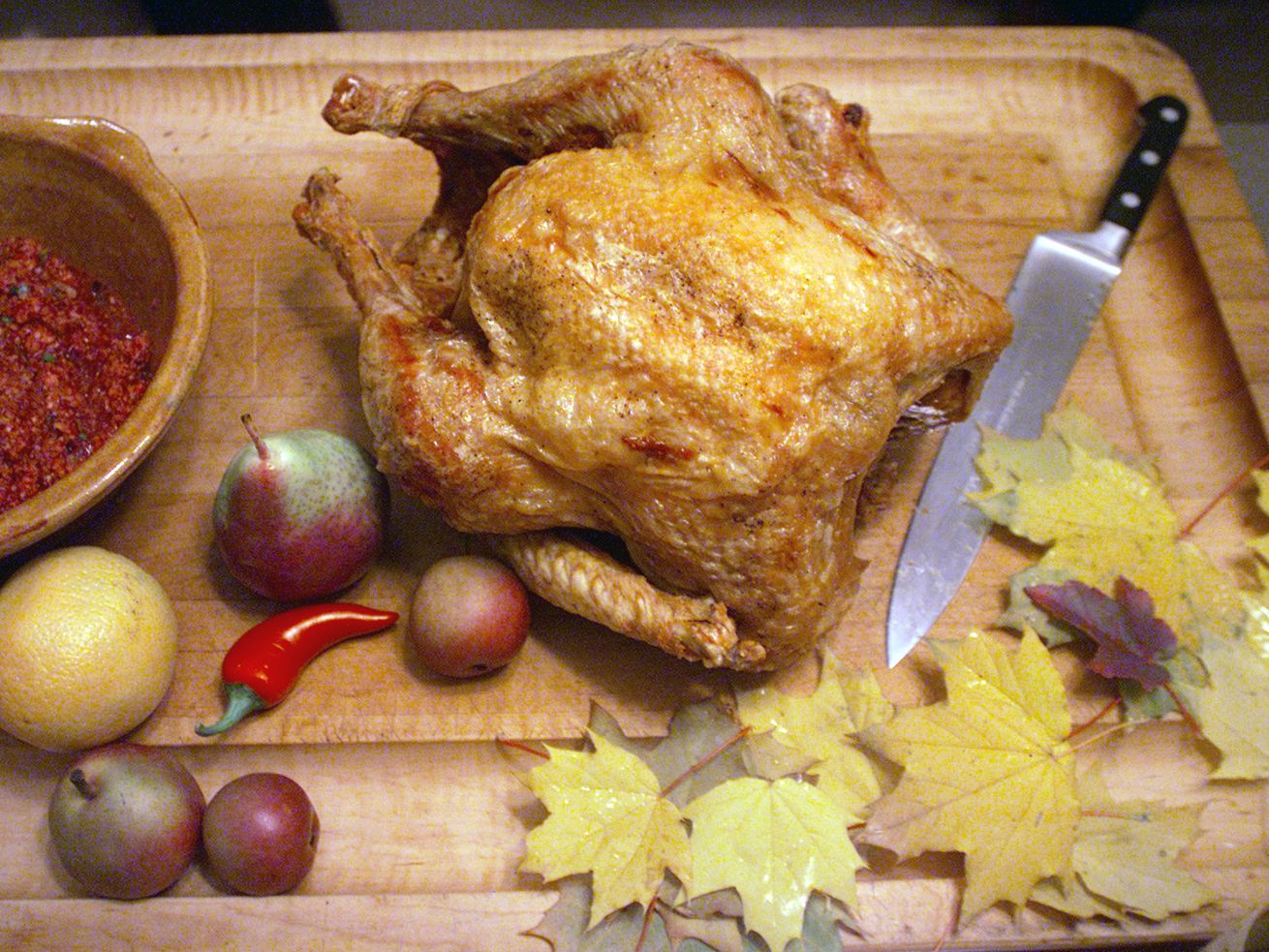 Deep frying a turkey might be the safest way to enjoy Thanksgiving this year. | David Kamerman/The Boston Globe via Getty Images

Thanksgiving is going to look very different in America this year. For one thing, political dinner conversations may be tenser than usual. But more importantly: Holiday travel is risky, and planning an appropriately distanced and safe Thanksgiving meal requires stressful mental gymnastics. For those who aren’t canceling the gathering entirely, safety is a major concern. As Zeeshan Aleem recently reported for Vox, two in five Americans say they are likely to attend a large holiday gathering this holiday season.

As a result, families and friends are adjusting their festivities to meet pandemic limitations. But smaller, socially distanced gatherings might create a certain staleness at your celebration. After all, at the heart of Thanksgiving — when you ignore the brutal colonial part — is togetherness. Americans who try to split the difference between celebrating and staying safe will refrain from hugging, eat at comically large tables or outside in colder temperatures in some parts of the country, and even wear masks during the meal. These are necessary precautions, but a strained way to host a celebration.

I’d like to suggest a method to prevent an uninspired pandemic Thanksgiving: Try partaking in the ritual of deep-frying a turkey, an exhilarating outdoor spectacle that feels strikingly, almost aggressively American. Amid all this madness, we might as well turn Thanksgiving into an extreme sport.

If you deep-fry your turkey this year, you can brag about your skills to your distant relatives, your coworkers, or your Instagram followers. What better way to enjoy a complicated holiday about American gratitude than by stunting on your neighbors? It’s a recipe that’s beautiful in its simplicity: Take a turkey, and, using a pulley system, submerge it in bubbling oil as your loved ones look on admiringly. Your family could possibly even drop by, wrap up a plate, and dip out to their respective homes. Watching football inside with your cousins feels unwise this year, but standing 6 feet apart to watch a sizzling-hot meal be prepared? It’s basically 2020 genius. If you want something a little more pedestrian and a little less performative this season, you could go for Arby’s new lineup of deep-fried turkey sandwiches, but intuition tells me that a DIY project is the more satisfying endeavor.

According to a 2015 Vogue article, Cajun chef Justin Wilson was the first person to report seeing a turkey deep-fried — way back in the 1930s. It was a popular Creole country dish that didn’t take off in the rest of America until the 1980s and ’90s (Martha Stewart had a 1996 recipe). Although one in four Americans is cutting back on their meat intake, and more health-conscious consumers might be wary of frying, now is the time to make the jump. As Luke Winkie previously reported for Vox, turkey farmers this year are uncertain about what the holiday season will bring business-wise, so they’re trying to get creative with smaller birds and different presentations. Why not match them by getting creative with your own preparation?

To deep-fry a turkey, you can buy a turkey-frying kit — available everywhere from Home Depot to Dick’s Sporting Goods — with all the essentials: a pot the size of a small child, plus a lifting hook to dunk your bird into and pull it out of the vat. A cooking thermometer would also be helpful, to know when the oil is hot enough (Epicurious recommends starting to fry when the oil reaches 375 degrees). You’ll also need a propane burner and a full propane tank.

Christine Byrne, a food journalist and recipe developer, has been deep-frying turkeys at Thanksgiving for about six years. She used to smoke or roast her turkeys but moved toward frying because it’s much quicker — it only takes her 30 to 40 minutes (online consensus says it typically takes three to four minutes per pound of turkey). “We have a whole pulley system rigged up on our bottom deck,” she told me. “We actually put the fryer oil on the deck outside, and hook the pulley up so that we can lower the turkey really slowly into the hot oil, which helps because you can’t drop it too fast. Otherwise the temperature will change too quickly, and it might overflow or explode.”

Not all turkey insiders are fans of the method, however. The director of consumer affairs for the National Turkey Federation (yes, apparently that’s a thing) once described deep-frying a turkey as “staring into a loaded double-barrel shotgun. One barrel is a cardiologist’s nightmare, the other … is a microbiologist’s worst dream come true.” Apparently, the federation was worried about the risk of undercooking the meat, but according to the US Department of Agriculture, as long as a turkey has an internal temperature of 165 degrees or more, it should be all good, even if it is slightly pink. Still, all I hear is a fantastic endorsement. We all deserve to eat something gluttonous this year! If it’s prepared correctly, microbiology shouldn’t come into play at all.

But safety is a concern because of Covid-19, because of our easily clogged arteries, and because of, well, the giant vat of hot oil being tended by amateurs. So preparation and awareness are key. First and foremost — and this is not to scare you — there should be a fire extinguisher present. Better safe than sorry: More cooking-related fires happen on Thanksgiving than any other day of the year and result in $15 million in damages annually. YouTube is littered with terrifying videos of turkey-frying gone wrong, and these instances are preventable.

Scott F. Pilgreen, Alabama’s state fire marshal, spoke with me about how to stay safe when deep-frying a turkey. He recommends that would-be fryers invest in the proper oil — something with a high flashpoint (the temperature at which the oil will begin to burn). Most resources online suggest peanut oil.

Byrne recommends making sure your turkey is dry before frying it, to prevent dangerous splattering. (The internet concurs.) “The turkey ideally will be room temperature when you start frying it because that helps prevent too fast of a temperature change. If the turkey is refrigerator cold and your oil is 350 degrees, that’s a big difference,” she said.

Pilgreen agrees that completely thawing your turkey is a key part of a safe experience. “The last thing you want to do is put a frozen turkey into that boiling oil,” he said. And oil maintenance is key: “Make sure you don’t overfill the fryer. Make sure there’s enough distance between where you’re frying and the building that you’re adjacent to, whether it be your home, your apartment, or your camper.” He also pleads with people to watch the fryer carefully and never leave it unattended. “That’s probably one of the worst things that one can do, once you have the frying going on, is leaving it unattended. It’d be no different than leaving something on your stovetop in your house,” he said. Onlookers should stay far apart and have one to two people lower the turkey into the oil, which works to limit potential virus spread, too.

“Don’t disrespect what’s going on, because it can be dangerous,” Pilgreen warns. “Fried turkeys are good. If you’ve never had one, they’re excellent, but let’s just be safe in doing it.”

Last year, my boyfriend’s family deep-fried a turkey. We ran outside, nervous with excitement, ready to see the show. It was a nail-biter of an experience; we were prepared for the worst with a fire extinguisher in tow, but there were no accidents and the turkey was perfect — crisp on the outside, tender on the inside, and made that much better by the experience of watching it get plunged into a giant vat of boiling oil. The drama of it all was deliciously satisfying: There in front of me was a pot of oil, loved ones, and a now deep-fried turkey, all captured on video in the cold November air. Sure, I fled as soon as the bird hit oil (I’m a baby), but it was the best Thanksgiving I can remember having in a long time.

This ritual gives us something that we can control, something warm to look forward to and look back on. The pandemic may have stolen a lot of fun from us, but a memorable Thanksgiving is something we might be able to pull off with a little elbow grease and a giant hunk of fried meat — and isn’t that just the most American thing? After the year we’ve all had, a deep-fried turkey — a reason to gather safely outdoors and be thankful — is better than anything we could possibly wish for.

Source: There’s never been a better year to deep-fry a turkey