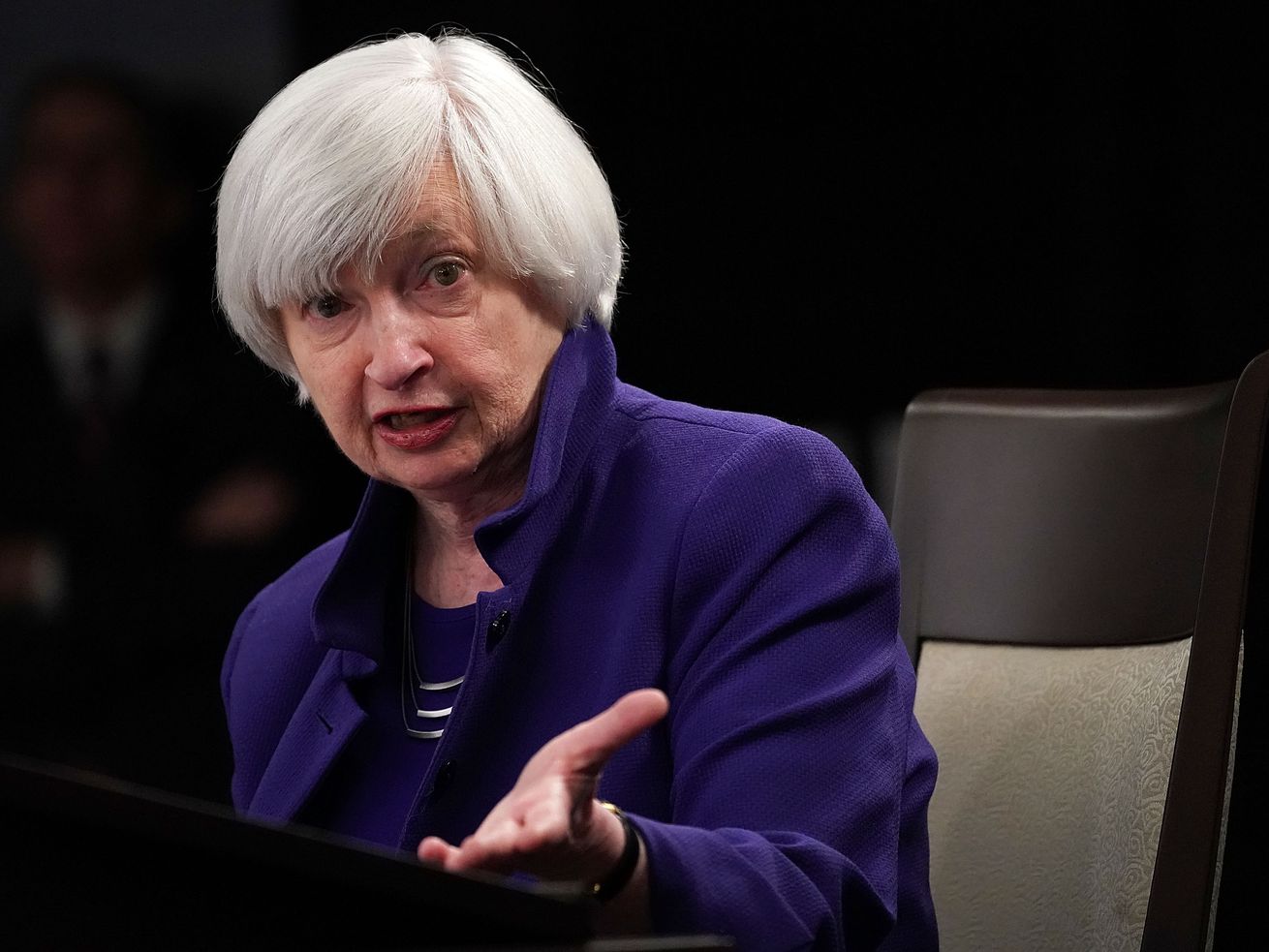 Janet Yellen speaks at a news conference in Washington, DC, in 2017, after announcing the Fed would raise interest rates. | Alex Wong/Getty Images

Yellen will become the first woman to serve as Treasury secretary in the US if confirmed.

The Wall Street Journal on Monday reported that President-elect Joe Biden intends to nominate Yellen, 74, to head the Department of the Treasury. Several other outlets confirmed the news shortly after; Biden is expected to announce his intent to nominate Yellen and other Cabinet picks in the coming days.

Biden’s pick is not necessarily a surprising one. In the days leading up to the decision, Biden said his nominee would be someone who “will be accepted by all elements of the Democratic Party … progressive to the moderate coalitions,” leading to broad speculation that it would be Yellen, who most Democrats are expected to support and who many Republicans could have a hard time opposing.

Yellen, who is originally from Brooklyn, New York, served as chair of the Federal Reserve from 2014 to 2018 before President Donald Trump decided to replace her with now-chair Jerome Powell. She previously served as president and CEO of the Federal Reserve Bank of San Francisco, chaired the White House Council of Economic Advisers under President Bill Clinton, and was a longtime professor at the University of California Berkeley.

“Yellen is eminently qualified, she oversaw a sprawling bureaucracy at the Fed. It would be incredibly difficult for various factions [Republicans, moderate Democrats, and progressive Democrats] to find issue with her tenure,” said Isaac Boltansky, director of policy research at Compass Point Research and Trading. “I don’t think she would make any side happy, per se, but she certainly wouldn’t make either side unhappy, and that might be as good as we can get.”

As Fed chair, Yellen oversaw the continued recovery from the Great Recession and left behind a solid legacy. Unemployment steadily declined, the stock market climbed, and inflation stayed low under her tenure. Part of the strong economy Trump inherited can be traced back to Yellen.

That’s not to say Yellen’s time at the Fed was perfect. As Sam Bell outlined in Politico in 2018, some people say that she was “too sanguine” about the potential for using regulations to stave off the next financial crisis, that she went too easy on Wells Fargo in the wake of its fake accounts scandal, or that she didn’t do enough to help smaller banks. “And yet on the critical issue at hand in her 2014 nomination — could we bring more unemployed workers back into the labor force without blowing things up for everyone? — she has been unquestionably vindicated,” Bell wrote.

Some people have also questioned the Fed’s decision to modestly raise interest rates under Yellen’s tenure, arguing that doing so prevented the economy from reaching its full potential and getting more people into the workforce. Of course, hindsight is 20/20. And at the Treasury Department, Yellen won’t have anything to do with interest rate decisions.

Progressives have also raised questions about her previous comments regarding the deficit, which she described as unsustainable.

Other contenders on the shortlist for the Treasury spot included former Deputy Treasury Secretary Sarah Bloom Raskin; current Fed governor Lael Brainard; and Roger Ferguson, the CEO of the Teachers Insurance and Annuity Association of America (TIAA), a financial services company, among others.

The Biden campaign declined to confirm the president-elect’s plans to nominate Yellen, and transition spokesperson Jen Psaki said in a statement that he “looks forward to announcing some members of his economic teem early next week who will work with him to build the economy back better.”

Biden will set the economic agenda, and the virus is at the top of his list

Heading the Treasury Department is an important job — the department oversees the IRS; the Office of the Comptroller of the Currency, which charters, regulates, and supervises national banks; and the US Mint, among other bureaus — and the secretary plays a key role in advising the president on economic issues.

Leading up to Biden’s announcement, there was quite a bit of back-and-forth among more moderate and progressive Democrats regarding who the Treasury pick should be. Progressives championed figures such as Sen. Elizabeth Warren (D-MA) and Raskin, and pushed Biden to eschew anyone with perceived industry or Wall Street ties. Moderates, on the other hand, hoped for a figure viewed as less divisive than Warren, more along the lines of Ferguson or Brainard.

But it is important to remember that the person chosen to run the Treasury Department reflects the Biden administration’s priorities, not the other way around, and will likely be in lockstep with the White House’s positioning on key issues.

“The Treasury secretary and Biden will, at least publicly, be on the same page and deliver the same message,” wrote Ian Katz, director at Capital Alpha Partners, in a recent note to investors. “You will not see Biden, for example, criticizing sanctions against other countries that the Treasury Department is working on.”

At least initially, that will mean the new secretary will work with Biden on his top priority: addressing the Covid-19 crisis.

“They’re not going to be able to remake Treasury in their own image, Treasury will still be forced to triage, as every agency will, in fighting the virus,” Boltansky said. “Whoever’s in that role, they’re going to be a virus-fighter first and a treasury secretary second.”

This could translate to the secretary trying to negotiate a new stimulus package with Congress, as current Treasury Secretary Steven Mnuchin has done, to little success, under Trump. It could also mean an effort to refocus the department on renewing CARES Act programs, like restarting Paycheck Protection Program (PPP) loans for small businesses.

Mnuchin recently decided to end lending programs put in place through the CARES Act, and asked the Fed to return funds earmarked for those programs. Biden’s team has been critical of the move. If those programs are restarted under the Biden administration — something that will become tougher if the funds are returned before Inauguration Day — the new secretary could oversee those as well.

Biden has also emphasized the importance of reasserting America’s presence on the international stage, and Treasury has a role to play there. One can expect more attention to the international arena from a Biden Treasury Department than from Trump’s, and an effort to reaffirm international relationships.

It’s possible, too, that the Treasury secretary (or other members of the administration) could wind up playing multiple roles through the Vacancies Act, should Biden struggle to get his choices through the Senate confirmation process. Trump employed this strategy often, like when then-White House budget director Mick Mulvaney was acting head of the Consumer Financial Protection Bureau.

If confirmed, Yellen will find herself in one of the most powerful governmental positions within the American economy yet again, though in a different role. And she is expected to be particularly influential in the role.

“Though all of the contenders [for Biden’s Treasury pick] would have Biden’s ear, we think Yellen’s voice would carry the most weight with the president and his advisers,” Katz wrote. “Not many people in the White House would want to debate economics with Yellen.”