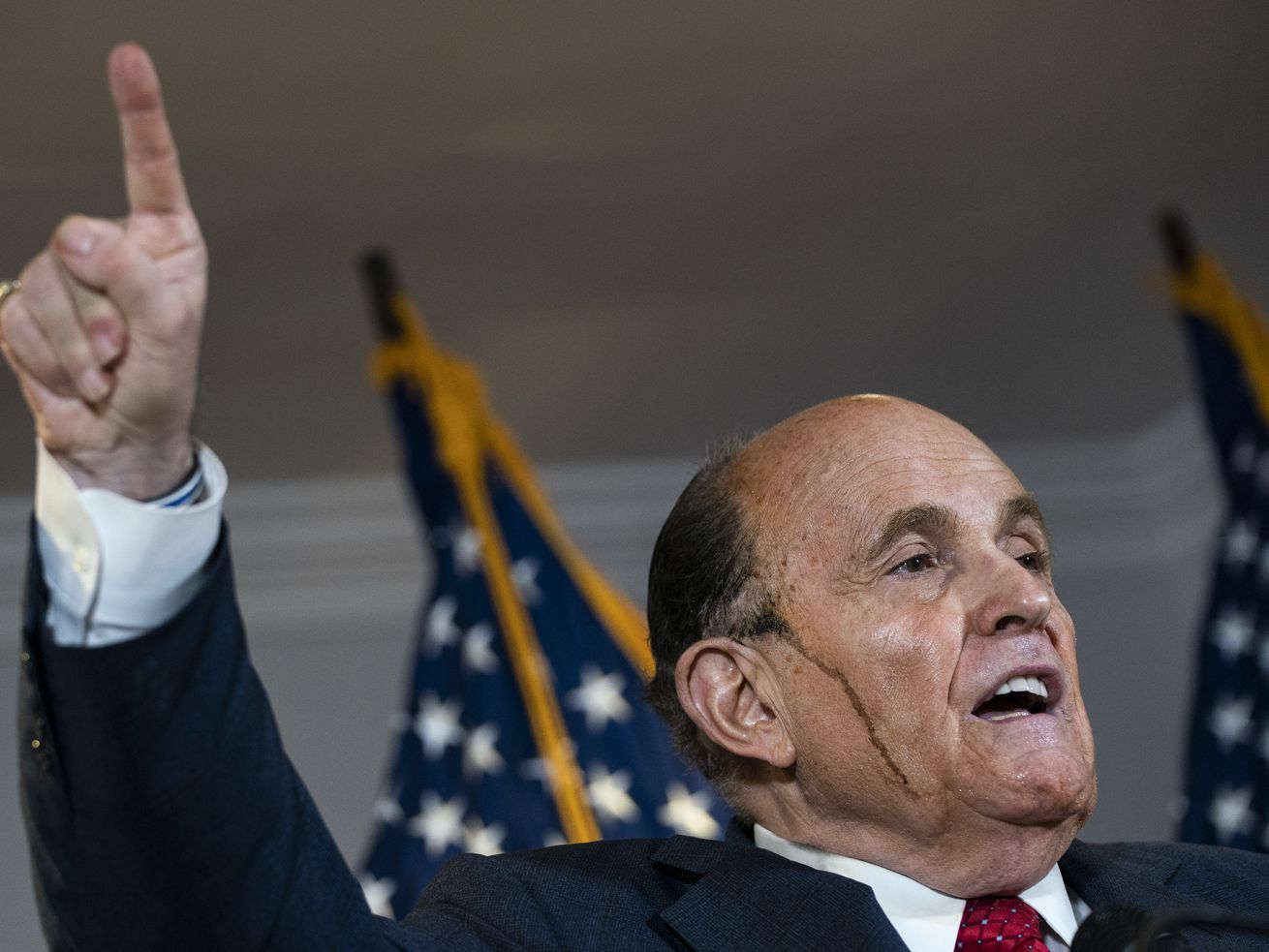 Rudy Giuliani speaks to the press about various lawsuits related to the 2020 election, inside the Republican National Committee headquarters on November 19, 2020, in Washington, DC. | Drew Angerer/Getty Images

Flynn is likely just the start.

Outgoing President Donald Trump kicked off what will likely be the first in a series of pardons of his associates last week, with his pardon for former National Security Adviser Michael Flynn.

Flynn pleaded guilty to making false statements to investigators back in 2017 — but that’s not all Trump pardoned him for.

The typical way pardons work is that the recipient is pardoned for specific crimes. But Flynn’s stands out because it also has preemptive aspects — that is, it’s written broadly to try to pardon Flynn for possible crimes he hasn’t even been charged with.

Preemptive pardons aren’t unprecedented, but they are unusual, and come far closer to a sort of presidential declaration that the president’s associates should be above the law. And Trump’s use of the tactic for Flynn hints at just how far he could go in his final weeks in office.

Several of Trump’s former top campaign advisers — Steve Bannon, Paul Manafort, and Roger Stone — have been charged with or convicted of specific crimes, for which they could be pardoned. (Trump already commuted Roger Stone’s sentence but has not yet granted him a full pardon.)

The universe of potential preemptive pardons, though, is far broader. For while many Trump associates have been charged with crimes, an even greater number have been investigated but have not faced any charges.

For instance, there’s the president’s lawyer Rudy Giuliani. The New York Times’s Maggie Haberman and Michael Schmidt reported Tuesday morning that, “as recently as last week,” Giuliani discussed “the possibility of receiving a pre-emptive pardon” from Trump (though Giuliani denied this on Twitter). Federal prosecutors in New York have probed Giuliani’s business activities and indicted two of his associates.

And some of Trump’s allies are urging him to take preemptive pardons even further. “I’d tell President Trump to pardon yourself and pardon your family,” Fox host Sean Hannity said Monday. It remains unclear whether Trump will try to go that far (particularly, a self-pardon may not be legal and the president can’t pardon state crimes), but it’s clear enough that his lame-duck pardon shenanigans are only getting started.

The Flynn pardon is very broad, and much of it is preemptive

In December 2017, Michael Flynn, Trump’s former national security adviser, pleaded guilty to one count of making false statements (lying to the FBI about his conversations with the Russian ambassador). Since then, his case has become a protracted legal saga — first Flynn tried to withdraw his plea, then a new Justice Department team sought to have the case against Flynn thrown out, and the judge in the case, Emmet Sullivan, has been weighing whether he should permit this latter move.

Last week, Trump announced that he had pardoned Flynn, but no documentation for that pardon clarifying its parameters was released until Monday night. Here’s what it looks like: 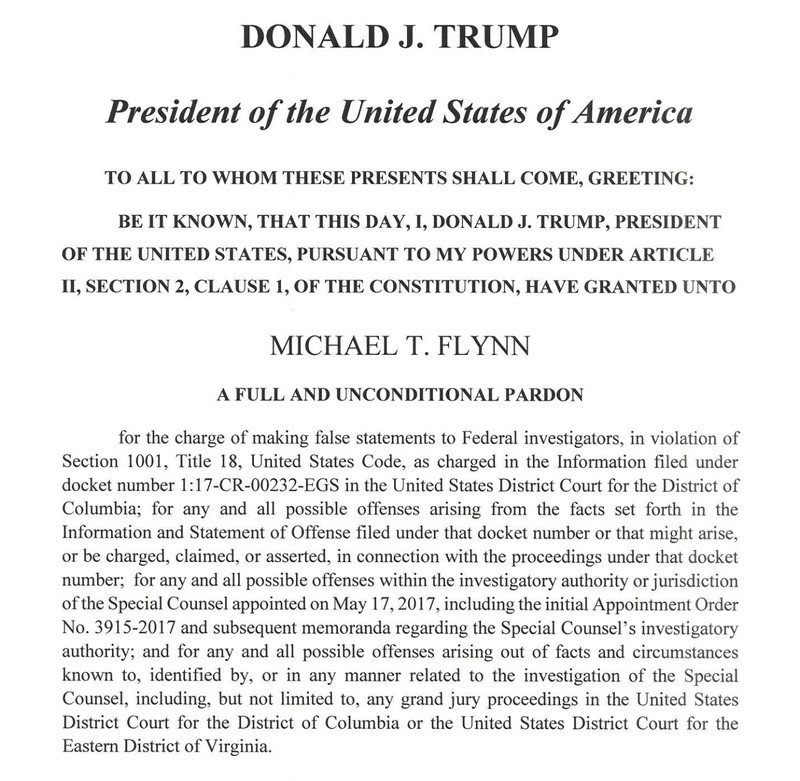 The pardon begins by listing the crime to which Flynn pleaded guilty: making false statements to federal investigators. But it covers a whole lot more than that. Flynn is also pardoned for:

“any and all possible offenses arising from the facts set forth in” the charging documents in his case (Flynn also admitted making false statements in Foreign Agents Registration Act filings about his work for the government of Turkey)
any offenses “that might arise, or be charged, claimed, or asserted in connection with the proceedings” in his case (for instance, there has been some discussion about whether Flynn could be charged with perjury by admitting his guilt under oath in court and then changing course)
“any and all possible offenses within the investigatory authority or jurisdiction” of special counsel Robert Mueller, and “any and all possible offenses arising out of facts and circumstances known to, identified by, or in any manner related to” Mueller’s investigation (that is, if Mueller found anything else that Flynn could be criminally charged for, the pardon is meant to cover that)

So this is not a typical pardon, targeted at crimes someone has actually been charged with or convicted of. It’s a preemptive pardon, designed to shield Flynn from being charged in the future.

In that respect, it’s similar to the unconditional preemptive pardon President Gerald Ford granted his former boss and predecessor Richard Nixon — a sweeping pardon for any criminal offenses Nixon may have committed during the course of his presidency.

The Flynn pardon is not quite as broad as that, but it’s clearly tailored to try to wipe out the possibility that Flynn will face any further charges connected to the current case against him, or in any way related to the Mueller investigation.

The New York Times has already confirmed that one preemptive pardon is under discussion — for Giuliani.

Late last year, news broke that federal prosecutors in the US Attorney’s Office for the Southern District of New York (SDNY) were scrutinizing Giuliani’s business and finances, exploring his contacts with former top Ukrainian officials, and investigating a host of potential crimes (including obstruction of justice, money laundering, serving as an unregistered agent of a foreign government, mail fraud, and wire fraud).

Two of Giuliani’s associates, Lev Parnas and Igor Fruman, were indicted on charges of campaign finance violations that October. The pair allegedly had been helping Giuliani make connections with Ukrainian officials who claimed to know of scandalous information about the Biden family, that could be helpful to Trump. (The revelation of Trump and Giuliani’s efforts to get dirt on Biden from Ukrainian officials eventually resulted in Trump’s impeachment.)

This year, there have been few new developments in the matter. CNN reported that the investigation into Giuliani “was upended by the coronavirus pandemic, limiting prosecutors’ ability to interview witnesses, collect further evidence, and meet with the grand jury.” Giuliani has not been charged, but if this investigation is serious and still underway, he’d obviously be hoping for a pardon while his client is still in charge of the executive branch.

There has also been some discussion — at least from Sean Hannity — about preemptive pardons for members of the Trump family.

Trump’s son Donald Trump Jr. faced scrutiny in the Mueller investigation but ultimately wasn’t charged. Trump himself also was probed for obstructing justice, but Mueller opted not to charge him, in part because Trump was the sitting president.

President Trump could attempt to pardon himself, but it’s unclear if that would be legal (a popular theory among the #Resistance is that Trump will resign early and let newly installed President Mike Pence pardon him). One issue here, though, is that the president has no power to pardon state crimes — and he is currently under investigation for potential bank and insurance fraud in New York state.

Now, if Trump truly does plan to run for president again in 2024, he might have political reasons to hold back on the broadest assertions of his pardon powers. Then again, he might feel he’s appropriately laid the groundwork to defend those moves, having disparaged any investigations of himself or anyone close to him as “witch hunts.” All that’s clear now is that his pardons are only getting started.

Some who want pardons are backing Trump’s “stolen election” lies

Finally, there’s been a notable pattern among some who are likely seeking pardons: They’ve tended to champion Trump’s lies and conspiracy theories that the 2020 election was stolen from him.

Giuliani, of course, has been in charge of Trump’s post-election legal fight, spreading false claims of widespread voter fraud while reportedly seeking a preemptive pardon.

Attorney Sidney Powell — Flynn’s lawyer — stood up with Giuliani at a press conference two weeks ago making particularly bizarre claims of fraud. (She asserted that the voting systems company Dominion rigged the vote against Trump, in part because there was “communist money” involved and that the company had ties to the late Venezuelan dictator Hugo Chávez.) Powell has filed lawsuits as well filled with similarly false claims. (Flynn himself has said “there is no doubt in my mind” that Trump won in a “landslide.”)

Bannon, too, has been spreading false information advancing Trump’s stolen election narrative, and has been advising Giuliani behind the scenes, according to the Washington Post.

Whether or not there was any explicit quid pro quo involved here, it’s clear that all these people were interested in pardons (in Powell’s case, for her client), and that all these people knew the importance of pleasing the man who could issue those pardons. Indeed, the main champions of Trump’s post-election fraud lies have been people who wanted Trump to pardon somebody — which is revealing of how much bad faith is at play here.