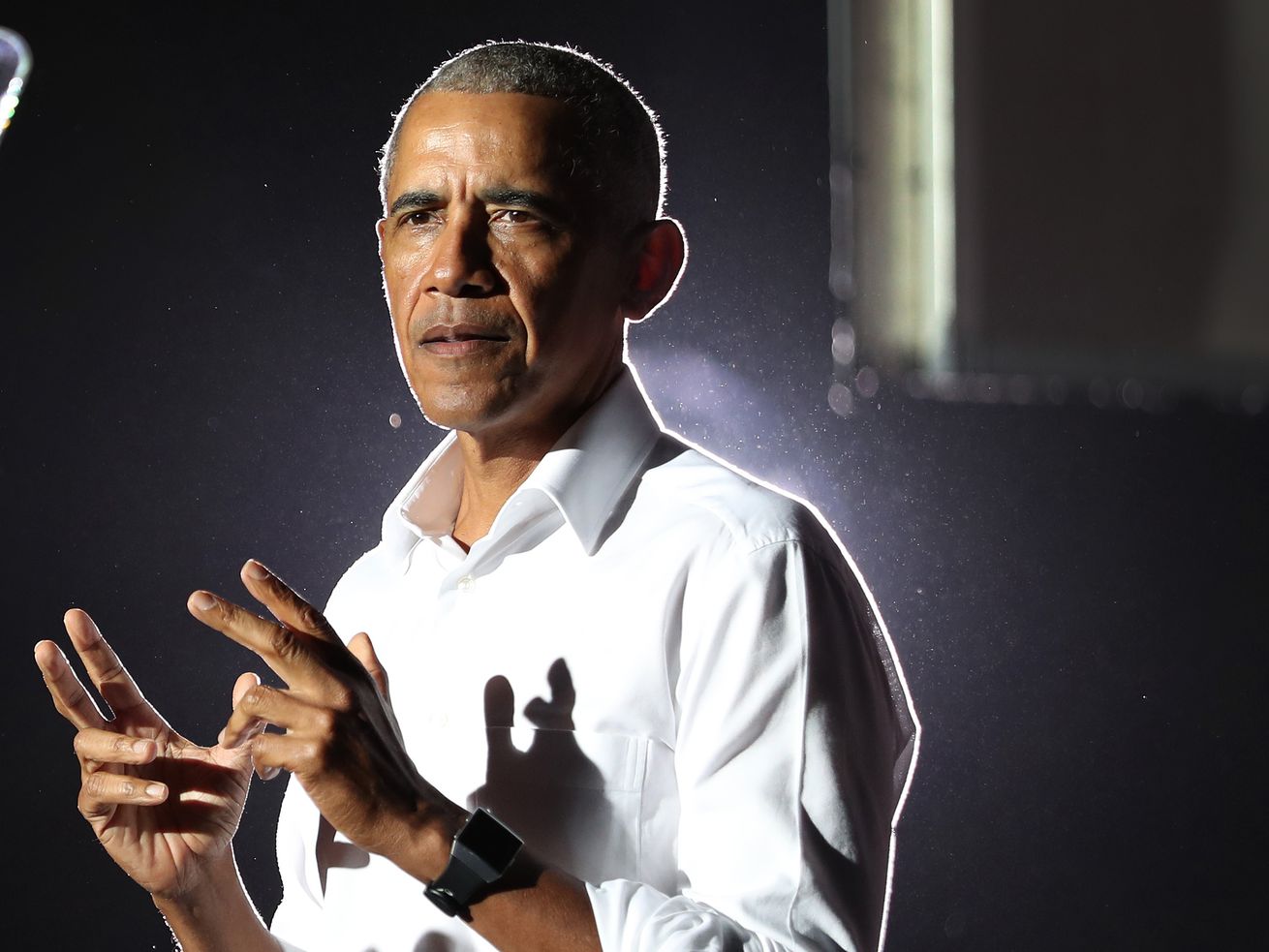 Former President Barack Obama speaks in support of Joe Biden during a rally at the Florida International University on the eve of the election in Miami. | Joe Raedle/Getty Images

Obama’s critique of defunding aligns with his longtime messaging on policing.

Former President Barack Obama is getting pushback from progressive leaders in his party after saying in an interview Wednesday that political candidates who use “snappy” slogans such as “defund the police” could jeopardize their campaign goals on police reform and even lose support from their base.

“You lost a big audience the minute you say it, which makes it a lot less likely that you’re actually going to get the changes you want done,” Obama told Peter Hamby, who hosts Good Luck America, a Snapchat political show. “The key is deciding, do you want to actually get something done, or do you want to feel good among the people you already agree with?”

Obama’s remarks are in line with other Democrats like House Rep. Jim Clyburn and Sen. Mark Warner, who see the phrase as damaging to the party, arguing Republicans weaponized the slogan against Democrats during the election, leading to losses in the House. However, more progressive members of Congress, including newly elected Reps. Cori Bush of Missouri and Jamaal Bowman of New York, pushed back against this notion. Rep. Alexandria Ocasio-Cortez — without mentioning the former president’s name — also countered in a tweet that messages like “defund the police” have actually been effective.

“The thing that critics of activists don’t get is that they tried playing the ‘polite language’ policy game and all it did was make them easier to ignore,” Ocasio-Cortez wrote. “It wasn’t until they made folks uncomfortable that there was traction to do ANYTHING even if it wasn’t their full demands.”

In the wake of the police killings of George Floyd and Breonna Taylor, the words “defund the police” could be seen on protesters’ signs and heard in chants in America’s streets, with the idea being to move money away from big police budgets and toward social and other community services. Although Americans seem more supportive of the idea behind defunding than the wording itself, according to several polls, demands to change policing still led to the passage of a slew of police reform ballot measures in November.

While the movement to defund the police isn’t going anywhere, and its future in — and impact on — the Democratic Party’s platform remains to be seen, what many find disappointing about Obama’s comments is his downplaying of “a policy demand,” as Rep. Ilhan Omar suggested, when “we lose people at the hands of police.”

However, given Obama’s messaging and stance on policing historically, his current critique of defunding shouldn’t come as a surprise. The former president has a record of placing himself on the moderate side of his party — condemning police shootings of Black people, while simultaneously speaking highly of the hard work police officers do.

Obama’s record on race and policing in America

President Obama’s recent comments, made while promoting his recent book, fall in line with what he said earlier this summer. In his May 29 statement after the death of George Floyd, Obama said that the solution “the legacy of bigotry and unequal treatment” involves everyone regardless of race or class, and that includes “the majority of men and women in law enforcement who take pride in doing their tough job, the right way, every day.”

This sparked criticism from a number of activists. In a letter to Obama, published in The Intercept, Chenjerai Kumanyika — a researcher and assistant journalism professor at Rutgers University — wrote a rebuttal saying that the former president’s statement unveils a “fundamental misunderstanding” when it comes to the role that law enforcement plays in American society.

“By presenting things this way during this time, I assume you are trying to avoid alienating police officers who see themselves and their work as a force for good,” Kumanyika wrote. “But it is frustrating to see you, an extremely influential African American public figure, refusing to grapple in a more serious, historical, and political way with what the job of the police actually is — and how it contributes to our oppression.”

Obama tends to walk a fine line when it comes to race and policing, gaining critics from both sides of the aisle. He acknowledges the challenging and dangerous work that police officers perform, while also pointing out systemic and racial inequities baked into the fabric of the criminal justice system.

When Trayvon Martin was shot in Florida in 2013, Obama delivered a personal and moving speech highlighting the unfortunate reality that he and the rest of the Black community face each day. “Trayvon Martin could have been me 35 years ago,” he said in the White House briefing room that year, adding that if Martin had been a “white teen” that “from top to bottom both the outcome and the aftermath might have been different.” He echoed the same message in the killings of other Black men in the years to come.

Damn, Mr. President.Didn’t you say “Trayvon could’ve been my son?” In 2014, #BlackLivesMatter was too much.In 2016, Kaepernick was too much.Today, discussing police budgets is too much.The problem is America’s comfort with Black death — not discomfort with slogans. https://t.co/DJUSZebgW5

And yet after a grand jury rejected a criminal indictment in the death of Michael Brown in 2014, Obama said, “our police officers put their lives on the line for us every day.” Weeks later, after a New York grand jury also declined to bring charges against the police who killed Eric Garner, Obama echoed again, “law enforcement has an incredibly difficult job.” He made the same statement again in 2015 after violence erupted in Baltimore, following the death of Freddie Gray.

With all due respect, Mr. President—let’s talk about losing people. We lost Michael Brown Jr. We lost Breonna Taylor. We’re losing our loved ones to police violence.It’s not a slogan. It’s a mandate for keeping our people alive. Defund the police. https://t.co/Wsxp1Y1bBi

Meanwhile, some of his more conservative critics claim that all Obama does is “hate on cops” and didn’t do enough to support police while in office, even though his actions prove otherwise. For instance, when five police officers were killed in Dallas, Texas, in 2016, Obama, in his speech at a memorial, criticized activists calling for police reform, underscoring that advocates tend to blame the entire law enforcement for the irresponsible actions of a few police officers.

The Obama administration did seek to implement some police and prison reforms. For instance, in 2014, after the fatal shooting of Brown in Ferguson, Missouri, and the fatal choking of Eric Garner in New York City, Obama launched the President’s Task Force on 21st Century Policing, which demanded that all police killings be investigated by independent prosecutors. The task force also called for an end to “stop-and-frisk” or all racial profiling by the police — which presents a much harder implementation.

While Obama’s recent remarks have garnered critiques from the left, the former president has at least stayed consistent with his messaging. But some may still have expected a change, now that he doesn’t have to court all sides of the American public from the presidential office.

Source: Obama said “defund the police” is a bad slogan. This shouldn’t come as a surprise.