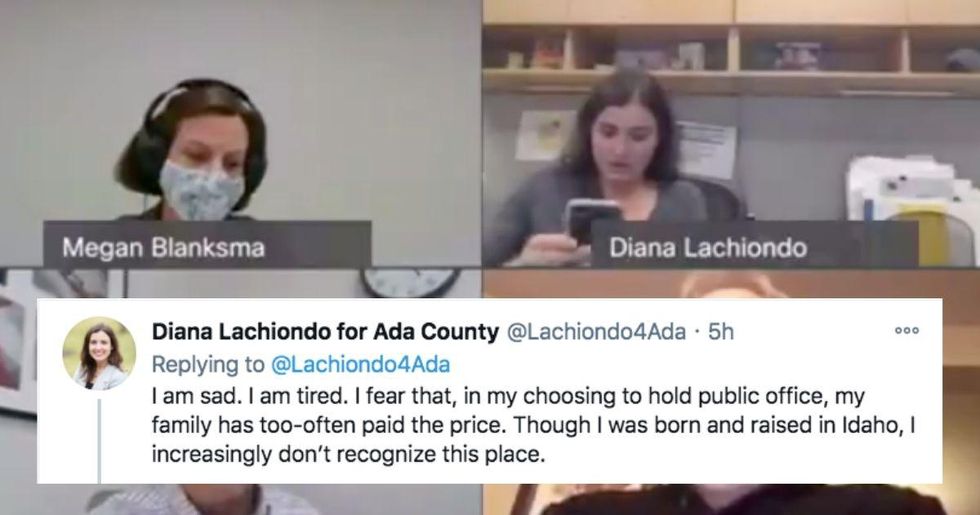 Oof, America. We have really got to get on the same freaking page here.

Protesting public health guidelines and mandates during a global pandemic is pretty ridiculous to begin with. But when public health officials find themselves getting threats and public servants’ children are feeling scared in their own homes, we’ve gone way, way over the line.

Last night, an Idaho health department meeting to discuss and vote on COVID-19 mask mandates came to an abrupt end due to safety concerns over protesters raging in the parking lot of the health department building as well as at the homes of some of the officials in attendance.

According to Boise police, three of the officials at the meeting had protesters gathered outside of their homes during the meeting. One health board member, Ada County Commissioner Diana Lachiondo, interrupted the meeting after a phone call to inform her colleagues that she needed to leave.

“My 12-year-old son is home by himself right now and there are protesters banging outside the door,” Lachiondo said, clearly shaken and in tears. “I’m going to go home and make sure he’s OK.”

The meeting was shut down after the mayor and chief of police requested they adjourn in the interest of public safety.

“I got a call from the mayor, and it sounds like the police, and she is requesting that we stop the meeting at this time because of the intense level of protesters in the parking lot and concern for police safety and staff safety as well as the protesters that are at some of our board members’ homes right now,” Central District Health Director Russ Duke said.

Some of the protesters appeared to be part of People’s Rights, an activist group created by Ammon Bundy who gained national fame in 2016 for leading the occupation of a wildlife refuge in Oregon. Others came from an anti-vaccination group, Health Freedom Idaho, according to CBS News.

“During last night’s Board of Health meeting, armed protestors once again assembled outside my home: yelling, banging, firing air horns, amplifying sound clips from Scarface, accusing me of tyranny and cowering inside,” she wrote. “I wasn’t actually inside the house: I was calling in from my office at the Ada County Courthouse. But my two young sons and my mother (who was out taking our dog on a short walk) were. And as many of you saw last night, my son called me in tears at the beginning of the meeting.”

“I am sad. I am tired. I fear that, in my choosing to hold public office, my family has too-often paid the price. Though I was born and raised in Idaho, I increasingly don’t recognize this place,” she wrote. “There is an ugliness and cruelty in our national rhetoric that is reaching a fevered pitch here at home, and that should worry us all.”

“And, above all,” she added, “I am terrified about the virus’s current trajectory.”

And that right there highlights what makes this whole situation so tragic. This is a public servant whose primary concern is the safety and well-being of the public. Even as she’s having to deal with the safety and well-being of her own family, she’s focusing on trying to save the people she serves from the impact of an out-of-control pandemic. Idaho is surging, like much of the rest of the country, and regional hospitals have warned that critical care will soon be compromised. Officials like Lachiondo are trying to keep that from happening and are being demonized for it.

When public health officials are being threatened and harassed for doing their jobs, we’ve entered seriously problematic territory. When children are calling their parents from inside their own home because they don’t feel safe, we’ve lost our way. When measures to help save American lives and well-being—in addition to the economy, since the economy depends on keeping the pandemic under control—are met with armed protests, we’ve crossed into cuckoo bananapants land.

Source: Armed protesters threatened an Idaho health official and her child at their home