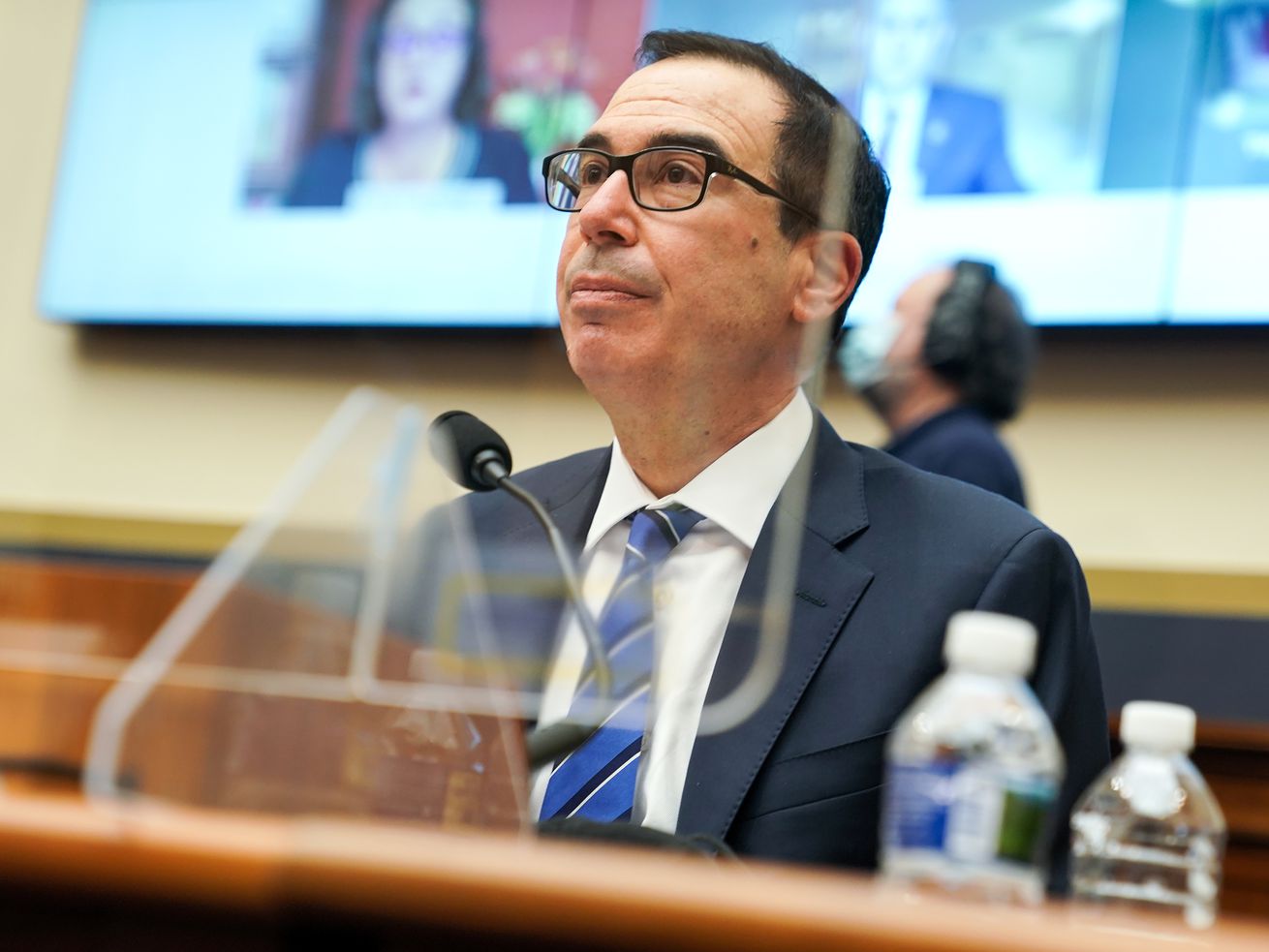 Stimulus talks, after a surge in momentum last week, have hit a new roadblock.

There are now two competing proposals in Congress, neither of which has garnered the support needed to move forward.

The first is a $908 billion bill that a bipartisan group of senators is working on, which has been heralded as a strong “starting point” by House Speaker Nancy Pelosi and Senate Minority Leader Chuck Schumer. The second is a $916 billion offer from the White House via Treasury Secretary Steven Mnuchin, which Republican lawmakers — including Senate Majority Leader Mitch McConnell and House Minority Leader Kevin McCarthy — have rallied behind.

Both contain funding for small businesses and vaccine distribution, though they differ on a couple key points. The bipartisan proposal, for example, includes far more funding for unemployment insurance (UI), guaranteeing a weekly $300 boost to recipients for 16 weeks, on top of what they are currently receiving on the state level.

The White House offer, on the other hand, only includes $40 billion to extend expiring programs that have increased access to UI. It also contains funding for a second round of $600 stimulus checks, while the bipartisan proposal does not.

Democrats have already rejected the Mnuchin plan given its treatment of UI, while McConnell has balked at the bipartisan proposal as unnecessarily broad and favored a more targeted bill. These disagreements leave lawmakers at yet another impasse, though both Republicans and Democrats have emphasized they’d like to get something done before leaving for the holiday break, something they’re currently scheduled to do by December 21.

“We need to do it to save lives and livelihoods, with the hope that much more help is on the way,” House Speaker Nancy Pelosi said at a press conference last week. Barring more congressional action, a number of programs are otherwise set to expire by the end of the month, including housing protections and pandemic UI coverage for 12 million Americans.

Mnuchin’s proposal includes a provision that has been incredibly important to Republicans — liability protections that would shield businesses from pandemic-related lawsuits — as well as money for the Democratic priority of state and local aid. However, it falls short in funding for unemployment insurance, something Democrats have already called out.

“The President’s proposal starts by cutting the unemployment insurance proposal being discussed by bipartisan Members of the House and Senate from $180 billion to $40 billion. That is unacceptable,” Pelosi and Schumer said in a statement on Tuesday.

Mnuchin’s plan does not include any funding for enhanced UI payments above their current levels, according to a Democratic aide. The UI funding the Mnuchin plan does have is intended to extend pandemic programs for long-term unemployed people as well as gig economy workers and contractors, the New York Times reports. (These programs enable people to receive UI for an extra 13 weeks and opened up the program to contractors, freelancers, and gig economy workers; they currently cover roughly 12 million people.)

The White House plan differs significantly from the bipartisan proposal put forth by Republican and Democratic lawmakers including Sens. Mitt Romney (R-UT), Susan Collins (R-ME), Joe Manchin (D-WV), and Mark Warner (D-VA), which would create a weekly $300 UI supplement that would last for 16 weeks.

Earlier this year, the first stimulus package, the CARES Act, included a $600 weekly UI supplement that lapsed at the end of July, and this provision is intended to provide recipients with a similar, albeit smaller, boost. As Vox’s Dylan Matthews has previously explained, the average weekly UI payment this past January was $385 without any supplement, and the added CARES Act payments offered much-needed additional support.

Mnuchin’s plan also allocates funding for a one-time round of $600 stimulus checks, half the amount that individuals received earlier this year, the Times reports. The bipartisan Senate plan was not able to include a second wave of $1,200 stimulus checks because that would have added another $300 billion to the price tag, according to Sen. Dick Durbin (D-IL). A number of lawmakers including Sens. Bernie Sanders (I-VT) and Elizabeth Warren (D-MA) have, however, pushed for their inclusion.

The bipartisan group of senators on Wednesday released more details about their proposal, though their outline — obtained by Vox — notes that liability protections and state and local aid are among the areas subject to negotiations. Below are some of the provisions it includes.

Unemployment insurance: The plan includes an additional $300 weekly UI payment for 16 weeks into April 2021. This supplemental payment bolsters the weekly payment that recipients get, much like a prior provision did in the CARES Act. The bill would also extend pandemic unemployment insurance programs that are expiring at the end of December for another 16 weeks. A previous outline estimated the allocation for UI at $180 billion.

Rental assistance: $25 billion in rental assistance is included as well as the establishment of a federal eviction moratorium through January 2021. As Vox’s Jerusalem Demsas has previously reported, advocates have argued that at least $100 billion in rental aid is needed to cover current shortfalls. Additional action would be needed to ensure millions would not be evicted at the end of January.

Small business support: $300 billion for small business aid including the Paycheck Protection Program, a forgivable loan program that business owners can apply for to cover both payroll and operational costs. These loans are aimed at smaller businesses with 300 employees or fewer that have seen a 30 percent or higher decrease in revenue in any quarter this year. According to a Fortune report, this aid is aimed at addressing a dire need many business owners face. Almost 100,000 small businesses have already permanently shuttered during the pandemic.

Food aid: The proposal contains a monthly 15 percent increase in individual SNAP benefits, funds for pandemic aid for children who received food support at school, and money for other programs including Meals on Wheels and WIC. Demand for such aid has spiked dramatically during the pandemic, with food banks across the country facing overwhelming need in recent months. A previous outline estimated the allocation for food aid at $26 billion.

State and local aid: $160 billion allocated to state, local, and tribal governments, money that’s aimed at helping address everything from health services to teacher pay, as states stare down massive budget cuts due to unexpected pandemic expenses and losses of tax revenue. Lawmakers are using this number as a basis for negotiations.

Student loan deferment: Federal student loan payments would be deferred until the end of April 2021, extending a policy that’s currently in place through the end of January 2021. This policy could impact about 40 million student loan borrowers.

Liability protections: Lawmakers are continuing to negotiate on this point. Democrats don’t support these protections at all while Republicans want to make sure businesses are shielded from possible legal fallout related to their actions during the pandemic. A previous proposal included temporary liability protections for businesses and enabled states to make their own longer-term laws.

As Vox’s Ella Nilsen and Jerusalem Demsas have previously reported, there’s a number of other tenets in the proposal:

The framework also includes [funds] for transportation including airlines and Amtrak, $16 billion for vaccine development and more Covid-19 testing and tracing, $82 billion in federal education funding, $10 billion for the struggling US Postal Service, and $10 billion for child care, among other things.

The recurring issues that lawmakers have struggled to navigate throughout stimulus negotiations are still liability protections — a top Republican demand — and state and local aid — a top Democratic one. Earlier this week, McConnell had even suggested stripping both out of a stimulus bill in order to advance it, signaling some movement given his previous commitment to preserving liability protections.

“Negotiating 101 suggests we set those two controversial pieces aside and plow ahead with the huge pile of things that we agree on,” McConnell emphasized in a floor speech on Wednesday. He also tried to push for a narrower $550 billion bill last week, though he’s since backed the more expensive Mnuchin plan.

Democratic leaders have noted, however, that any package without state and local aid would be completely inadequate given huge budget cuts that regional governments are being forced to make. They’ve said, too, that state aid has support from lawmakers on both sides of the aisle. “State and local funding is bipartisan unlike the extreme corporate liability proposal Leader McConnell made which has no Democratic support,” Schumer has said.

Republicans thus far have insisted that liability protections are necessary to ensure that small businesses don’t get hit with a deluge of lawsuits for how they handled the pandemic, while Democrats counter that such shields are intended to protect corporations from accountability. Some Republicans, including McConnell, have opposed state and local aid because they claim that states could use this funding to cover other unrelated costs. Researchers, however, have emphasized that these funds are needed to address what could be up to $500 billion in shortfalls that states have accrued due to lower revenues and higher costs during the pandemic.

These two sticking points — as well as funding for more unemployment insurance — are among the areas the lawmakers must continue to work through if they want to reach a compromise in the coming weeks. The stakes for doing so are incredibly high: Millions of Americans are navigating layoffs, potential evictions, and business closures as coronavirus cases continue to soar.