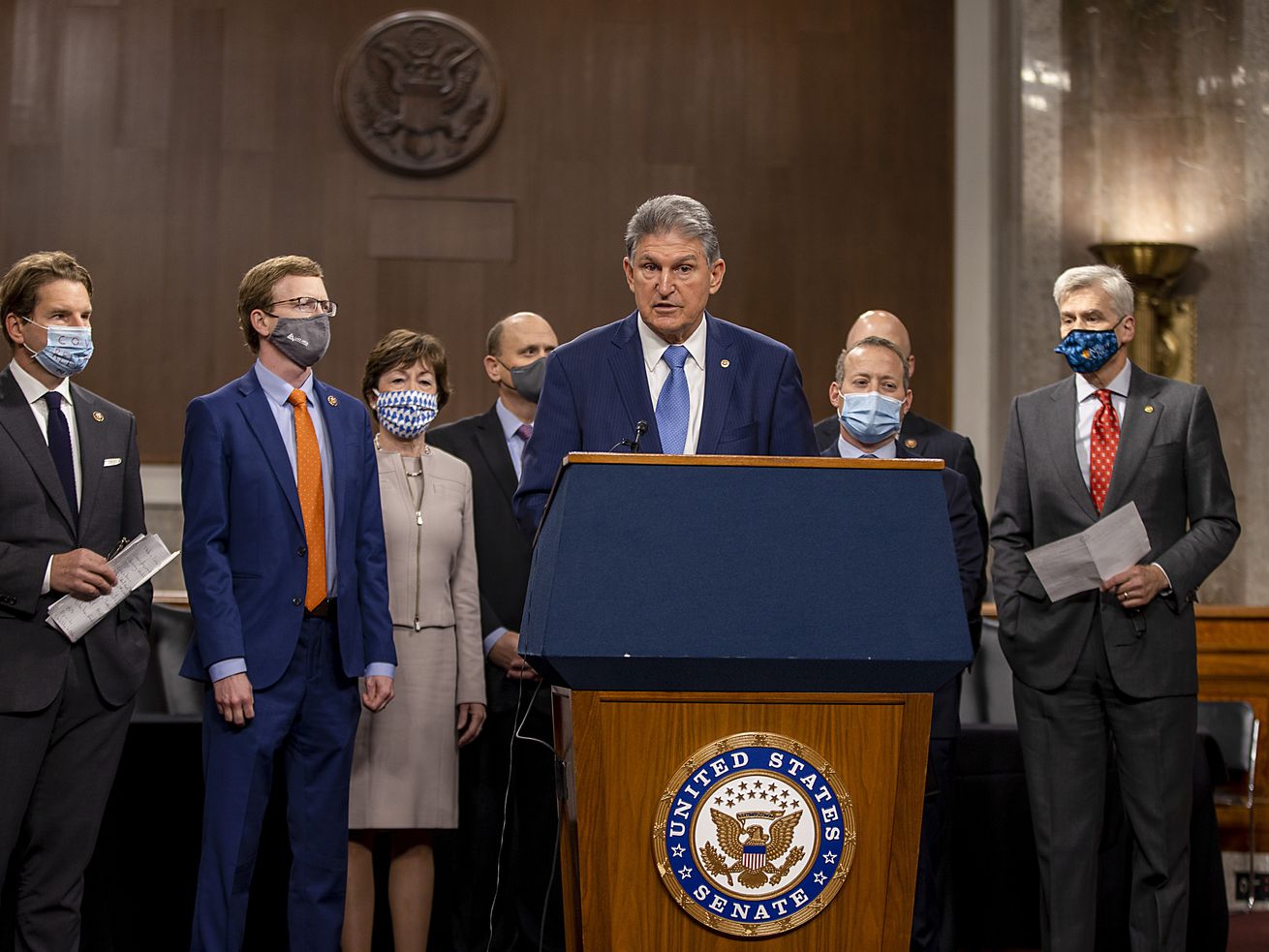 Sen. Joe Manchin (D-WV) speaks alongside a bipartisan group of members of Congress as they announce a proposal for a Covid-19 relief bill on Capitol Hill in Washington, DC, on December 1.   | Tasos Katopodis/Getty Images

Why a bipartisan group of senators split their stimulus proposal into two bills.

A bipartisan group of senators on Monday introduced two stimulus bills, an effort that could be Congress’s only hope for more Covid-19 relief in the near term.

The proposals include a $748 billion bill, which contains funding for 16 weeks of enhanced unemployment insurance, and a $160 billion bill, which includes money for state and local aid, as well as liability protections for businesses. While lawmakers had hoped to present one comprehensive plan, both state and local aid — and liability protections — were stripped out of the larger legislation because they remain contentious.

“We couldn’t come to a uniform consensus, but there’s still work going on in that area,” Sen. Angus King (I-ME) said of liability protections at a Monday press conference.

Currently, just one of these bills has broad bipartisan support. Since it no longer includes the two more controversial provisions, the $748 billion proposal contains priorities that many Democrats and Republicans agree on: In addition to more funding for enhanced UI, it includes aid for small businesses, rental assistance, food relief, and money for schools. The second $160 billion bill, meanwhile, only has the initial support of one Democrat — Sen. Joe Manchin (D-WV).

Lawmakers’ decision to break up these bills echoes a call from Senate Majority Leader Mitch McConnell, who has urged senators to move forward with the provisions they all back and leave the contentious issues for a later bill. Realistically, this means that lawmakers could advance the $748 billion bill, with little chance of the $160 billion one passing in the short term, or potentially ever.

Democrats had previously chafed against McConnell’s suggestion to drop state and local aid from any relief package, since this funding has been a top priority for them for months. And members of the Problem Solvers Caucus, a bipartisan group of lawmakers in the House, are also working on combining the less popular tenets in the $160 billion bill with the more popular $748 billion one so they can be considered in one proposal, according to a Politico report.

All these negotiations are taking place on a tight timeline. Congress is staring down a December 18 deadline on a government spending package, and stimulus faces similar constraints since it would likely get attached to it. At this point, the $748 billion bill has yet to be endorsed by House Speaker Nancy Pelosi, McConnell, or President Donald Trump. Members of the bipartisan group that put it together, including Sens. Manchin, Mitt Romney (R-UT), Susan Collins (R-ME), and Mark Warner (R-VA), have stressed that Congress needs to do something before the end of the year, when multiple relief programs expire.

“We will not go home for Christmas until we pass relief that goes to the American people,” Manchin said Monday.

What the two bills do — and don’t — include

The two bipartisan bills separate out the provisions that senators have agreed on and the ones they haven’t. The first bill contains $748 billion for priorities that have both Republican and Democratic support, including a weekly expansion of unemployment insurance, funding for small businesses, money for schools, rental aid, food aid, and a one-month eviction moratorium.

This bill does not, however, include another round of $1,200 stimulus checks — a very popular provision that was left out to reduce the cost of the package — so Republicans would support it. (Sen. Dick Durbin (D-IL) has estimated the cost of more direct payments at $300 billion.) Sens. Bernie Sanders (I-VT) and Josh Hawley (R-MO) are pushing for any final bill to contain stimulus checks, though how successful they’ll be remains unclear.

“We cannot go home until there [are] strong unemployment benefits plus $1,200 per adult, $500 per kid for every working person and family in this country,” Sanders told Politico on Monday. He noted, too, that he was disappointed in the broader scope of the bill, which only includes $188 billion in new funds (most of the money was repurposed from funds that were unspent from the CARES Act).

Here are some of the provisions the $748 billion bill contains:

Unemployment insurance: The plan includes an additional $300 weekly UI payment for 16 weeks into April 2021. This supplemental payment bolsters the weekly payment that recipients get, much like a prior provision did in the CARES Act. The bill would also extend pandemic unemployment insurance programs that are expiring at the end of December for another 16 weeks. These programs currently provide roughly 12 million Americans with UI benefits. A previous bill outline estimated the allocation for UI at $180 billion.

Small-business support: $300 billion for small-business aid includes the Paycheck Protection Program, a forgivable loan program that business owners can apply for to cover payroll and operational costs. These loans are aimed at businesses with 300 or fewer employees that have seen a 30 percent or higher decrease in revenue in any quarter this year. According to a Fortune report, almost 100,000 small businesses have already closed permanently during the pandemic.

Rental assistance and eviction moratorium: $25 billion in rental assistance is included as well as the establishment of a federal eviction moratorium through January 2021. As Vox’s Jerusalem Demsas previously reported, advocates have argued that at least $100 billion in rental aid is needed to cover current shortfalls. Additional action would be required to ensure that millions of Americans would not be evicted at the end of January.

Student loan deferment: Federal student loan payments would be deferred until the start of April 2021, extending a policy that’s currently in place through the end of January 2021. This policy could impact about 40 million student loan borrowers.

The second $160 billion bill includes an agreement on state and local aid, and no agreement on liability protections:

Liability protections: Lawmakers are continuing to negotiate on this point. Most Democrats don’t support these protections at all while Republicans want to make sure businesses are shielded from possible legal fallout related to their actions during the pandemic. A previous proposal included temporary liability protections for businesses and enabled states to make their own longer-term laws.

It’s unclear if House Democratic leadership, Senate Republican leadership, and President Trump will sign on to either of these bills. Members of the bipartisan Senate group implored leadership in both parties to consider the $748 billion option and give it a vote in the House and the Senate this week.

“There’s no excuse for either the speaker or the leader,” said Durbin on Monday.

There are reasons, however, that leadership in both parties could still be opposed. Democrats may want to hold out for a more comprehensive option that successfully wraps state and local aid into one measure with their other priorities, knowing full well that the smaller $160 billion bill may never pass if they move forward with the $748 billion one. And Republicans could keep up the call for as small a relief bill as possible: McConnell has previously urged the passage of a $550 billion proposal, for example. Trump has been much less concerned about the size of the bill, but has been a wild card throughout stimulus negotiations and has yet to stake out a new position on this offering.

As lawmakers grapple with what to do next, the need for more stimulus, whether it comes in the form of this legislation or an alternative option, remains dire. Millions of people could lose unemployment insurance and face eviction by the end of the year, barring additional legislative action.

Source: A new $748 billion bill could be Congress’s best hope for more stimulus this year