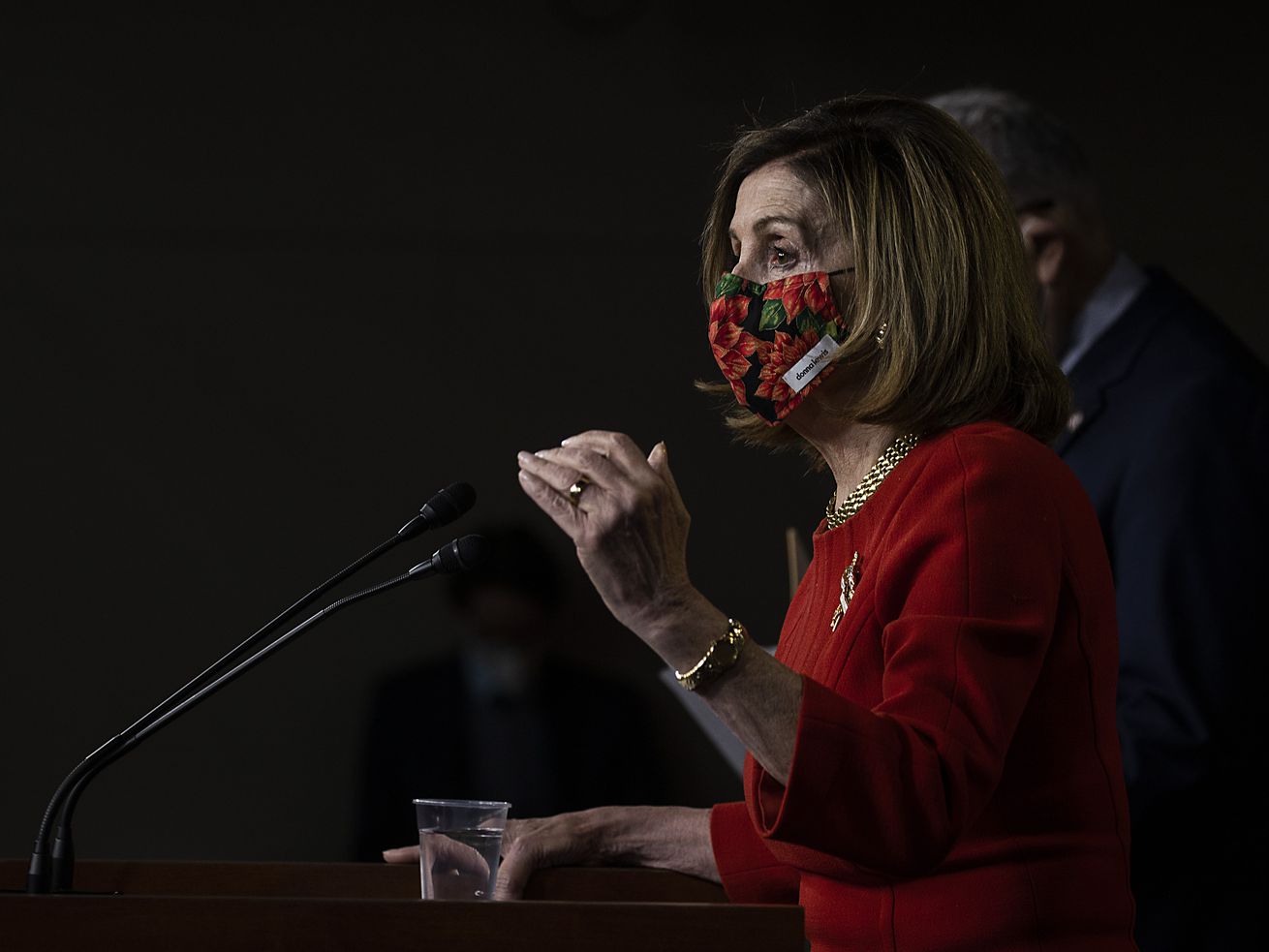 It includes another round of stimulus checks — and more unemployment relief.

Days before the holidays, Congress has passed a $900 billion bill to extend unemployment insurance, pay out additional stimulus checks to Americans and provide more loans for small businesses.

The Democratic-controlled House of Representatives passed the relief bill Monday night on a vote of 359-53, just hours after the final legislative text was released to members. A few hours later, the Republican-controlled US Senate did the same with a vote of 92-6.

“It is a good bipartisan bill,” Speaker Nancy Pelosi said on the House floor Monday morning, mentioning provisions Democrats secured like additional food assistance and a temporary extension of an eviction moratorium. Pelosi also nodded to the $600 direct payments that will be going out to Americans. “I would have liked them to have been bigger, but they are significant and they will be going out soon,” she said.

The bill is designed to be a short-term bridge to get financial relief to Americans as the country enters a particularly difficult stretch of the coronavirus pandemic, with about 200,000 new confirmed cases per day. At the same time, an end may be in sight, with the first vaccines going out to health care workers and more on the way.

“We can finally report what our nation has needed to hear for a long time: More help is on the way,” Senate Majority Leader Mitch McConnell said Sunday night. Pelosi and McConnell themselves received a first dose of the Covid-19 vaccine last week, and President-elect Joe Biden also received his on Monday.

There are still a number of big things that didn’t make it into the final relief bill, including broad aid to state and local governments that Democrats wanted, and liability protections for companies that were a top priority for Republicans. Addressing the Senate Sunday night, Schumer admitted while states and cities would receive some funding specifically for education, Covid-19 testing, and public transit, “the agreement we reached is far from perfect.”

“Immediately, starting in the new year, Congress will need to get to work on support for our COVID-19 plan, for support to struggling families, and investments in jobs and economic recovery,” Biden said in a statement Sunday. “There will be no time to waste.”

But additional federal stimulus may well hinge on a pair of undecided Senate races in Georgia that will decide which party controls the Senate. Passing another deal may not be easy.

What the stimulus deal contains

While there’s a lot that the stimulus agreement omits, it is expected to offer much-needed aid on a few fronts. Here’s what we know so far on the details.

Stimulus checks: There is a second round of stimulus checks, though they are smaller than those distributed earlier this year. These direct payments include $600 for individuals who made $75,000 a year or less in adjusted gross income in 2019, and $1,200 for couples who made $150,000 or less. Individuals and couples with children who qualify for the stimulus checks would also receive an additional $600 per child. Payments will be incrementally reduced for people who make more in annual income, much like they were in the spring.

Unemployment insurance (UI): The plan includes an additional $300 in weekly federal UI payments through March 14, 2021. This supplemental payment is set to bolster the weekly payment that recipients would get from their state unemployment programs, much like a prior provision did in the CARES Act. The bill would also extend the pandemic unemployment insurance programs that are expiring at the end of December. These pandemic-specific programs currently provide roughly 12 million Americans with UI benefits.

Small-business support: $325 billion is dedicated to small-business aid including repurposed funding for the Paycheck Protection Program, a forgivable loan program that business owners can apply for to cover payroll and operational costs. These loans are aimed at businesses that have seen revenue declines this year. For many, however, this aid comes too late — according to a Fortune report, almost 100,000 small businesses have already closed permanently during the pandemic.

Rental assistance and eviction moratorium: $25 billion in rental assistance is included as well as the establishment of a federal eviction moratorium. As Vox’s Jerusalem Demsas previously reported, tenant advocates have argued that at least $100 billion in rental aid is needed to cover current shortfalls. Additional action would be required to ensure that millions of Americans would not be evicted at the end of January.

Paid sick leave: There are tax credits for businesses that voluntarily provide paid leave, which continues a policy established in the Families First Coronavirus Response Act, but companies are not mandated to offer such benefits. Previously, workers who had coronavirus or those caring for children dealing with school closures were guaranteed paid leave if their workplaces were covered by FFCRA.

The legislation contains a number of other provisions: The bill includes $82 billion to help schools reopen; $45 billion for public transit systems; $27 billion to help states ramp up Covid-19 testing; and $15 billion in small business loans specifically targeted to theaters and small venues that have been hit particularly hard by the pandemic. The bill also includes $15 billion in aid for airlines — which would be required to bring furloughed employees back — according to Reuters.

It also includes language to ban surprise medical bills for emergency care, the product of months of bipartisan negotiations to end the practice that contributes to some patients getting steep medical bills from out-of-network providers.

Finally, the bill also has new guidelines for the Federal Reserve after Republicans — led by Sen. Pat Toomey (R-PA) — demanded recent emergency lending programs at the Fed be canceled in any final version of the bill.

As Vox’s Emily Stewart has explained, the Fed will be forced to eliminate several emergency lending programs created with CARES Act funding in the spring, and will be barred from restarting them without congressional approval. It will also return the unused portion of the $454 billion Congress allotted it under the CARES Act to the Treasury Department, something the Fed had agreed to do in November.

The bill doesn’t provide direct aid for state and local governments, a Democratic priority, or the liability protections that shield businesses from coronavirus-related lawsuits Republicans had advocated for. Additional deferment of federal student loan payments is also not included in the agreement, Politico’s Michael Stratford reports.

How long it will take people to receive help

Speaking on CNBC Monday morning, US Treasury Secretary Steven Mnuchin laid out an optimistic timeline for when Americans will see relief in the form of stimulus checks.

“The good news is this is a very, very fast way of getting money into the economy,” Mnuchin said. “Let me emphasize: People are going to see this money at the beginning of next week.”

But based on the timing of aid from the CARES Act, it could be a few weeks before people see direct relief from the legislation.

Earlier this year, the first round of direct payments was deposited in people’s bank accounts around mid-April: “Within two weeks of the CARES Act going into effect in March, more than 81 million payments were disbursed, totaling more than $147 billion, all through electronic transfers to recipients’ bank accounts, according to the Government Accountability Office,” CNBC recently reported.

People who do not have bank accounts, or whose information is not on file with the IRS, will likely see a more delayed distribution of the payments. For more information on what to expect with stimulus payments in the coming weeks, you can read Vox’s explainer here.

The timing of the implementation of enhanced unemployment insurance payments will also depend on the state. States began distributing $600 in supplemental UI roughly two weeks after the CARES Act was approved this past spring, which means the weekly $300 addition could begin in early January.

And when it comes to the Paycheck Protection Program, banks and other financial institutions began taking applications about a week after the funds were approved by Congress in March. That could set up applications for a new round of loans to kick off at the end of December or early January.

This lag time could be costly for those waiting on assistance; by the time much of this money gets to those who need it, the programs they are meant to extend will have been expired for weeks.

Nevertheless, such aid comes at a crucial time: According to the latest Labor Department report, 19 million people are currently receiving unemployment insurance. In November, job growth slowed significantly compared to the prior month, suggesting that the unemployed are facing limited opportunities for new work. And this winter, coronavirus cases are projected to soar — forcing thousands of businesses to shutter or slow their operations to prevent the spread of the illness.