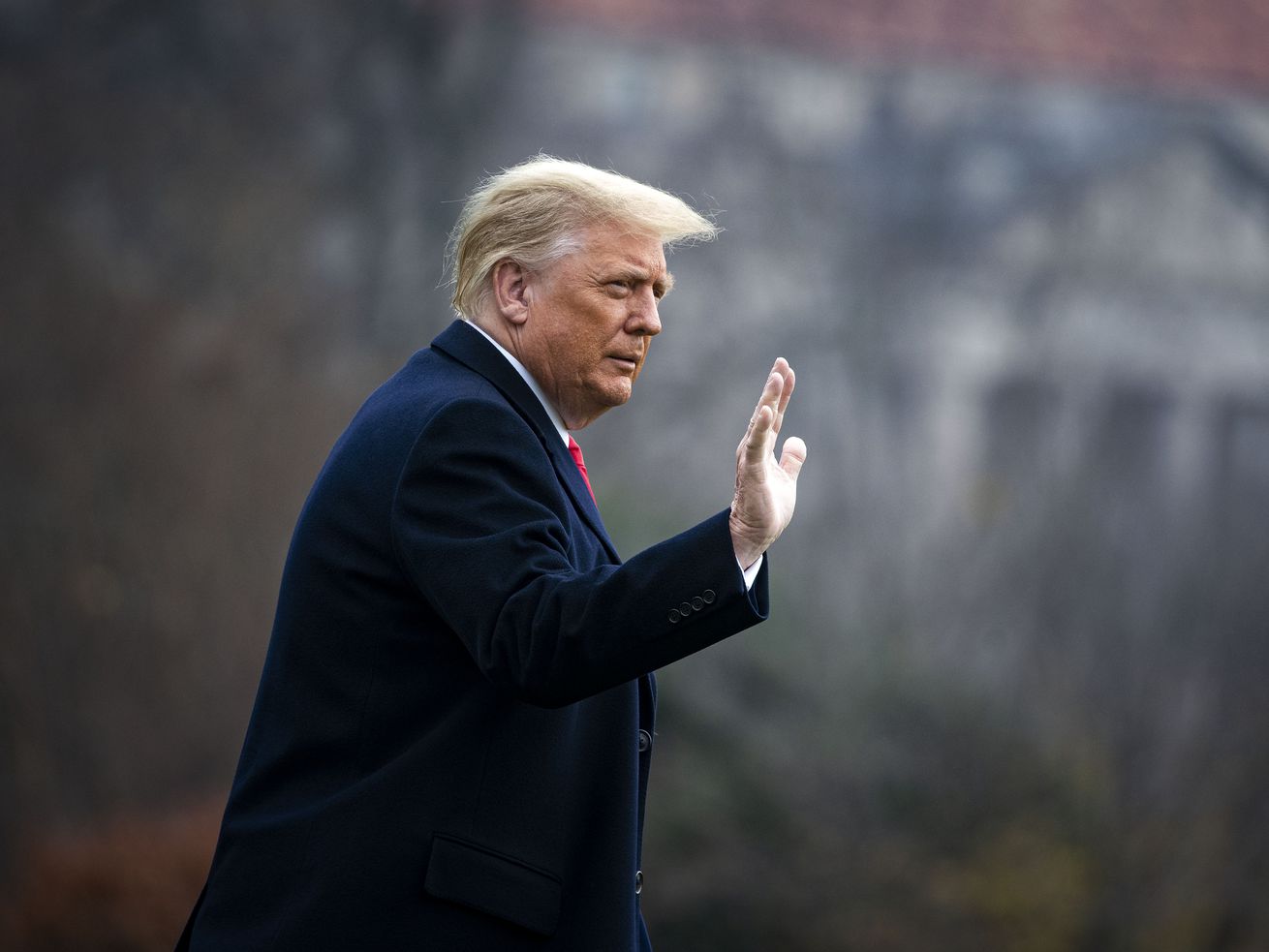 US President Donald Trump waves as he departs the South Lawn of the White House, on December 12, 2020, in Washington, DC. | Al Drago/Getty Images

Earlier this week, it looked like more coronavirus stimulus was finally on the way, but a surprise speech from President Donald Trump has now thrown that into doubt.

Unsatisfied with the $900 billion stimulus deal that Congress passed on Monday, Trump urged lawmakers to amend the legislation, and threatened to oppose it otherwise. “I am asking Congress to amend this bill and increase the ridiculously low $600 to $2,000 … and to send me a suitable bill or else the next administration will have to deliver a Covid relief package,” he said in a speech posted to Twitter Tuesday evening. Trump’s chief demands included cutting what he described as extraneous spending and increasing the amount of stimulus checks from $600 to $2,000.

In these remarks, Trump did not explicitly say he’d veto the stimulus bill, but he did suggest that the next administration would have to approve more aid if Congress didn’t make the changes he outlined.

That speech has since fueled questions about how Trump will move forward with this legislation, which he has until Monday night to sign. (Because the stimulus package is attached to a $1.4 trillion government funding bill, if Trump does not sign this measure by December 28 — when current funding expires — the government could go into a shutdown.) It’s also the latest example of Trump throwing a wrench into an agreement at the last minute after failing to push these priorities during the negotiation process.

At this point, it’s unlikely that the changes Trump wants will actually make it through Congress. Following Trump’s remarks, Democratic leadership — and some Republicans — said they support approving $2,000 stimulus checks, but they’re expected to face major opposition from GOP leadership.

House Speaker Nancy Pelosi plans to bring this specific measure to the floor on Thursday, for example, but she’s poised to get blocked. Because Pelosi intends to consider the measure via “unanimous consent,” House Minority Leader Kevin McCarthy would also have to agree to this move. He isn’t expected to, however, given Republicans’ ongoing opposition to more expansive stimulus.

Republicans repeatedly refused to say what amount the President wanted for direct checks. At last, the President has agreed to $2,000 — Democrats are ready to bring this to the Floor this week by unanimous consent. Let’s do it! https://t.co/Th4sztrpLV

Senate Majority Leader Mitch McConnell, meanwhile, has not said whether he’d hold a vote on the $2,000 stimulus checks and is likely to oppose such a move for the same fiscal concerns.

Because of these dynamics, Trump’s requests probably won’t be met, and it’s unclear how he will respond at that point.

If he follows through with a straightforward veto of the stimulus bill, Congress has the numbers needed to override that move as long as current support for the legislation stays the same. If Republicans change their minds and align themselves with Trump, however, stimulus could be on hold until President-elect Joe Biden takes office.

Were that to happen, Trump’s demands will have done little beyond drawing some last-minute attention and delaying aid for millions who need it amid the ongoing pandemic.

The biggest opposition to Trump’s $2,000 checks are members of his own party

As has been the case throughout negotiations, Trump’s biggest opponents when it comes to approving more stimulus aren’t Democrats, but members of his own party.

For months, Republicans have chafed at considering a larger relief bill due to concerns about adding to the deficit. In a recent bipartisan proposal, stimulus checks weren’t even initially included because lawmakers wanted to keep costs down in order to win GOP support.

And until Trump made his push for $2,000 payments explicit, Republicans had proposed much lower amounts for the latest round of stimulus checks, according to a “Dear Colleague” letter Pelosi sent on Wednesday.

“In the bipartisan negotiations, Leader Schumer and I repeatedly asked Republicans what would be the highest number the President would accept for direct payments, and they responded with Sphinx-like silence,” she wrote. “In the negotiations, they would never go above $600 and in some cases, proposed $500.”

Now Republicans are set to block consideration of the $2,000 checks yet again, simply by declining to consider the matter. This scenario highlights how Trump has clashed with his own party on this subject once again, while simultaneously putting pressure on GOP leaders ahead of the January Georgia runoff elections.

Since Congress isn’t ultimately expected to amend this bill as Trump wants, he could veto it, just as he has threatened to do with the National Defense Authorization Act. There’s also the possibility that he does not take this route and still signs the bill even if it doesn’t change.

Were Trump to move forward with a veto, there are a couple of ways he could go about it: He could veto the bill directly, as he’s done in the past with measures like a resolution to block his attempts to fund a border wall, or he could potentially use what’s called a pocket veto. In the latter case, if Trump does not sign this legislation within 10 days of receiving it and Congress adjourns during that time, the bill is considered vetoed.

Congress has the numbers to override the first option but faces a more complicated scenario in the second.

At the moment, there’s enough support to override a straightforward veto: Earlier this week, 92 senators and 359 House members voted to pass the stimulus, which far surpasses the two-thirds majority needed in both chambers to nullify a veto. (Sixty-seven senators and 290 House members would have to vote for a veto override for it to take effect.)

If support for the bill changes, however, because enough Republicans decide to align themselves with the president, a veto override could be stymied. (Democrats don’t have the numbers alone: There are 48 members in the party’s Senate caucus and 233 Democrats in the House.)

In the case of a pocket veto, however, if Trump does not sign the bill before Congress adjourns its term on January 3 and he’s had 10 days or less to consider it, lawmakers won’t have an opportunity to override this move at all, forcing those in the new term to deal with both the funding and stimulus bills.

At that point, not only would a new stimulus package be delayed until the Biden administration, the government would also be at higher risk for another shutdown if more funding isn’t passed by then. Because of Trump’s actions, millions of Americans struggling with unemployment, evictions, and hunger would also have to wait even longer for more relief.