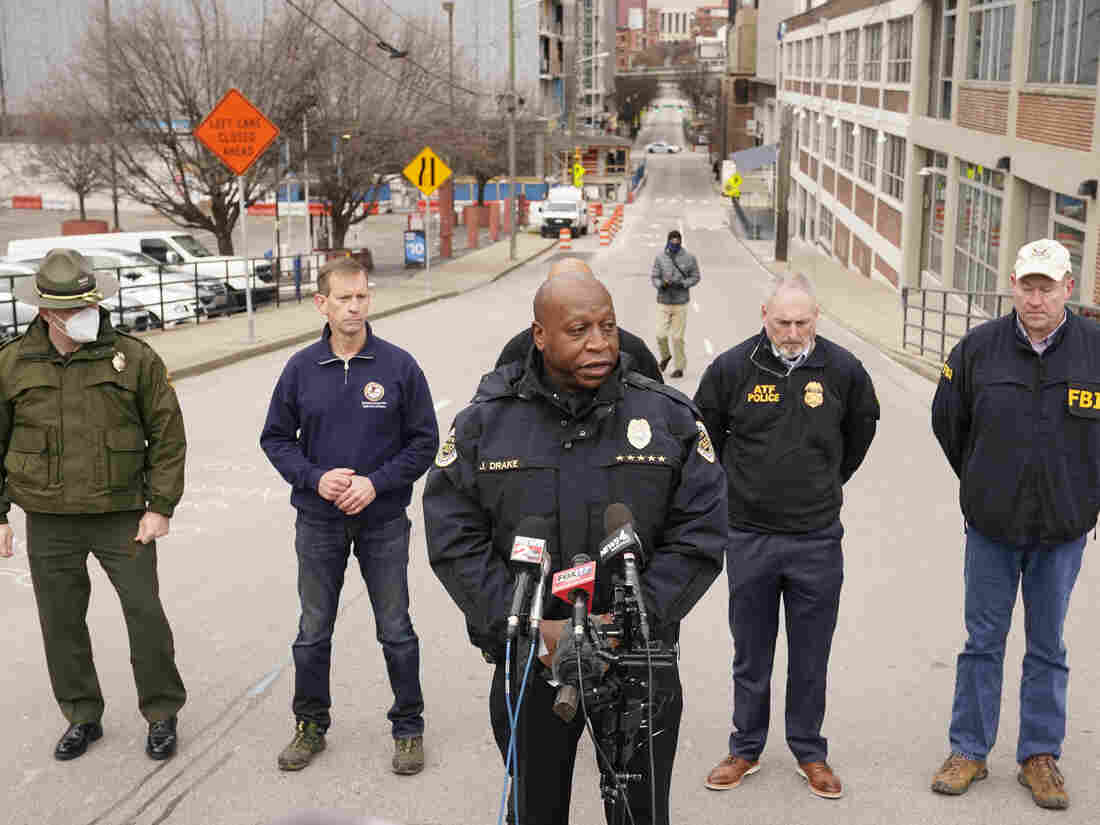 Nashville, Tenn., Police Chief John Drake speaks during a news conference on Christmas Day. Law enforcement is looking into who and how many may have been involved in a bombing in Nashville’s downtown corridor. 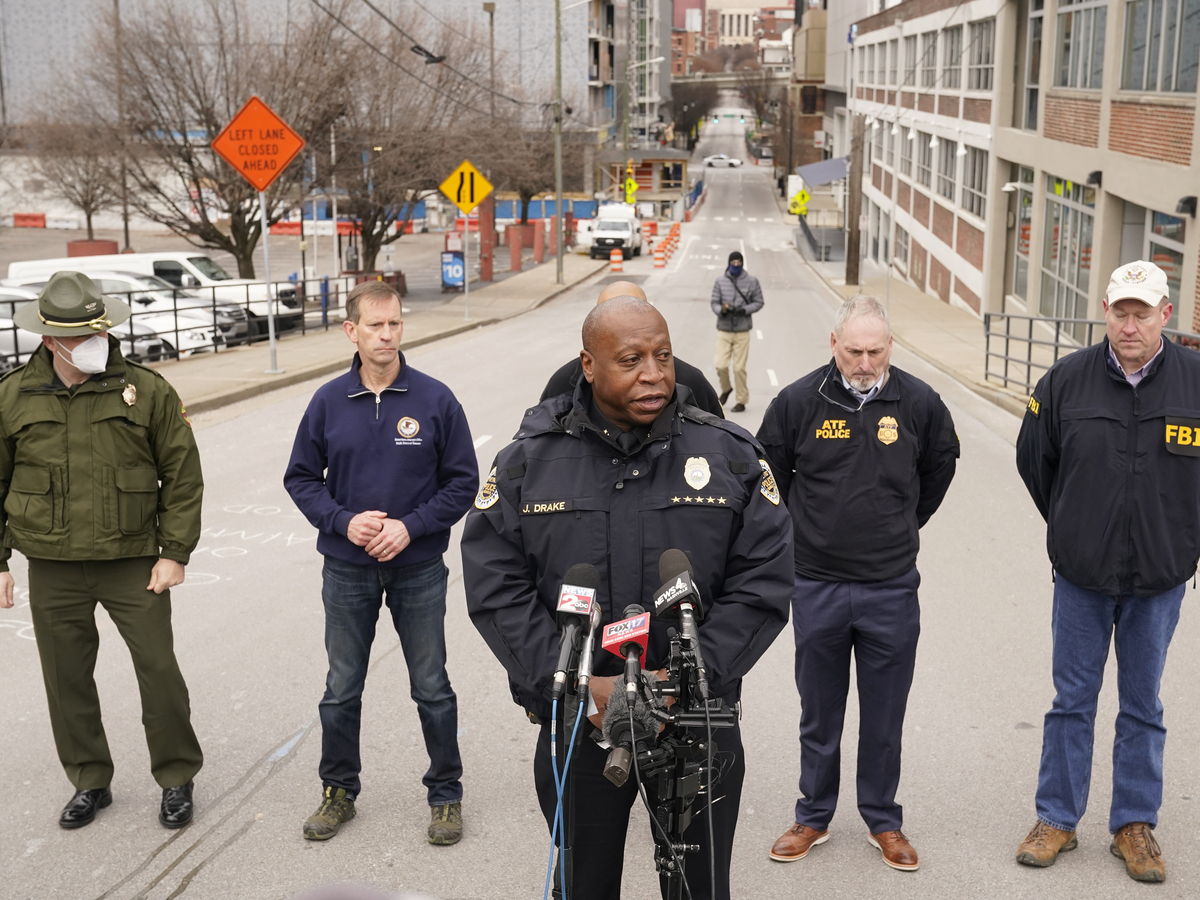 Nashville, Tenn., Police Chief John Drake speaks during a news conference on Christmas Day. Law enforcement is looking into who and how many may have been involved in a bombing in Nashville’s downtown corridor.

One day after a Christmas bombing in downtown Nashville, Tenn., damaged dozens of buildings over several blocks and injured at least three people, police are working with federal authorities to find the perpetrator.

“It’s just such a contrast,” Nashville Mayor John Cooper told Weekend All Things Considered on Saturday. “Christmas morning, time of peace on Earth and goodwill towards each other, and then you have a heinous, deliberate bombing and, of course, it gets everybody’s attention. How could this be? But there are no answers yet.”

Tennessee Gov. Bill Lee said on Twitter that he had toured the site of the bombing.

“The damage is shocking and it is a miracle that no residents were killed.”

A White House spokesman said Friday morning that Trump was briefed on the explosion and was “grateful for the incredible first responders and praying for those who were injured.” As of Saturday afternoon, the president himself had made no mention of the blast on Twitter.Law enforcement officials have received more than 500 leads and tips, and investigators are combing through the wreckage for clues.

“It’s like a giant jigsaw puzzle created by a bomb that throws pieces of evidence across multiple city blocks,” U.S. Attorney Don Cochran said at a news conference on Saturday.

Cochran said he was confident investigators would find the culprit, whom he described as “this ultimate Scrooge who on Christmas morning, instead of spreading joy and cheer, decided to spread devastation and destruction.”

Large portions of the state’s communications networks remained out of service, The Associated Press reported. In his request for an emergency declaration, the governor said communications were affected as far away as Kentucky and northern Alabama.

The blast occurred early Friday morning, hours after an RV appeared around 1 a.m. CT in front of an AT&T building on Second Avenue, a popular strip of honky-tonk bars and restaurants. A recorded voice warned that the vehicle was going to explode, and police went door to door to evacuate residents. Around 6:30 a.m., the vehicle exploded, which knocked out communications and disrupted local flight control systems, briefly grounding planes at Nashville International Airport.

Now, local police are working with the FBI, as well as the Bureau of Alcohol, Tobacco, Firearms and Explosives, to determine who was responsible.

Hundreds of FBI agents, analysts and staff members are on the ground in Nashville, said Douglas Korneski, FBI special agent in charge of the Memphis, Tenn., field office. The behavioral analysis unit in Quantico, Va., is also on the case.

Investigators aren’t sure whether one person was acting alone or whether several people were working together, but there are “a number of individuals we are looking at,” Korneski said.

“Federal agents have poured into downtown to look for pieces of the RV and any other evidence,” NPR’s John Burnett told Weekend Edition. “They’re reviewing videos from security cameras, and they’ve asked the public for leads.”

Three people hospitalized as a result of the explosion were in stable condition as of Friday night. So far, no fatalities have been reported.

It’s unclear whether anyone was inside the vehicle when it exploded. Metro Nashville Police Chief John Drake says human tissue may have been found at the scene, NPR member station WPLN reports.

At least 41 businesses were “materially damaged” by the blast, and several homes were destroyed, according to the mayor. Shock waves from the blast were reportedly felt miles away.

The AT&T building was one of the properties damaged in the explosion — which authorities described as an “intentional act” — and housed telecommunication equipment. Crews were working to restore power Saturday morning — a task made difficult by the ongoing aftermath of the explosion, such as a fire that reignited overnight and led to an evacuation.

AT&T said Saturday morning that its teams were on-site, working with safety and structural engineers to restore service.

“They have drilled access holes into the building and are attempting to reconnect power to critical equipment,” the company said in a statement. “Technical teams are also working as quickly as possible on rerouting additional services to other facilities in the region to restore service.”

Nashville’s mayor declared an emergency in the area and imposed a curfew there through Sunday afternoon. It will be some time before Second Avenue is back to normal, he said.

“Our partners at the FBI do have a large crime scene to investigate.”