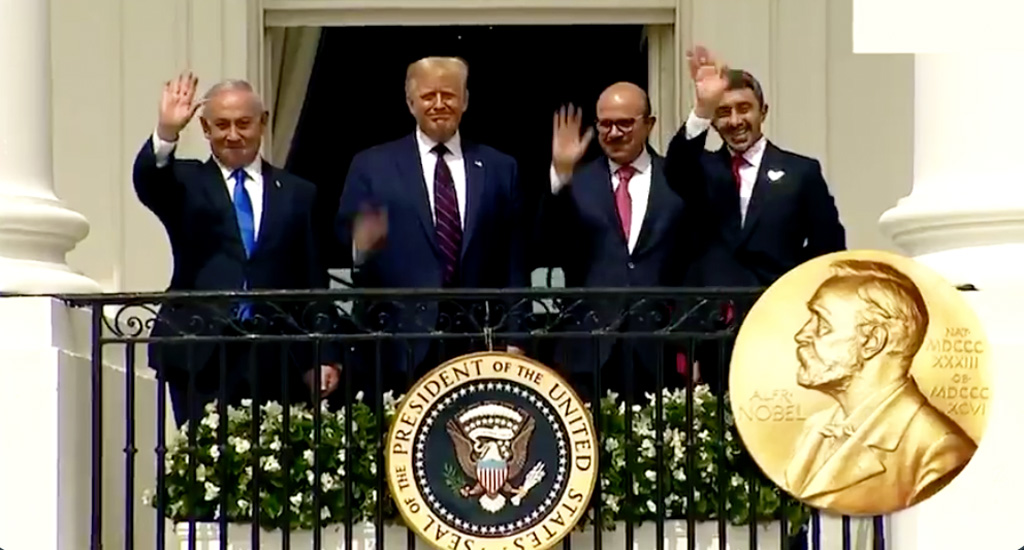 Trump’s still attempting to convince the world that he won the election (he very clearly did not, as the electoral college and courts agree), so of course, he figured that he could drop a Nobel Peace Price claim on top as gravy. This isn’t exactly a new tactic, since Trump has recently complained (while on his failed reelection campaign trail) that the press ignored his two (nonexistent) Nobel Prize wins (though he was nominated). The King of Fake News may have also believed a 2018 satiric article (that was debunked by Snopes) that started such a rumor for kicks. Whatever the cause, Trump has now tweeted out a campaign-style video that (after the 0:40 second mark) superimposes a Novel Peace Prize over footage of him with international leaders, including Israeli Prime Minister Benjamin Netanyahu.

As NPR’s David Gura quickly pointed out on Twitter, Trump definitely has not won the Nobel Peace Prize, and as such, he definitely doesn’t have the right (and could be held liable for) using the image without express permission.

A video President Trump tweeted today features the Nobel Peace Prize superimposed over photographs of him with the prime minister of Israel, and the foreign ministers of Bahrain and the United Arab Emirates.

A REMINDER: The president has not been awarded the Nobel Peace Prize. pic.twitter.com/nJHZbgy5I9

This may be of interest to The Nobel Foundation. https://t.co/cQUQPn3cOd pic.twitter.com/O22iJ41L3j

Who has won the Nobel Peace Prize, though? Former President Barack Obama, who received the honor in 2009 “for his extraordinary efforts to strengthen international diplomacy and cooperation between peoples.” The Nobel Foundation also “attached special importance to Obama’s vision of and work for a world without nuclear weapons.”

Twitter was clearly amused by the newest Trump claim full of nonsense, and they are throwing Obama’s actual win in Trump’s face.

Meanwhile, Obama got the Nobel Peace prize he never expected.

Huh. I could swear a president got the Nobel Peace PrizeOops, it was Barack Hussein Obama https://t.co/BK99d7eIGd

Elsewhere, yep, there’s a whole lot of laughter at Trump’s lies, but hey, at least this is a silly falsehood (unlike the COVID lies) that can’t harm anyone.

wait lmao hold on Trump just pasted a picture of the Nobel Peace Prize (that he certainly did not win) in his latest propaganda video hahaha what pic.twitter.com/wNFXTv3vuV

I hate to brag, but I won the Nobel Peace Prize. Because apparently, it is super to easy to win. You just have to say you did.

A video President Trump tweeted today features the Nobel Peace Prize superimposed over photographs of him with the prime minister of Israel, and the foreign ministers of Bahrain and the United Arab Emirates. It’s illegal to do this, but also too funny if the Nobel Committee sues

It took four years, but I finally found something @realDonaldTrump and I have in common:

neither of us has one the Nobel Peace Prize.

Here’s someone who really did win the Nobel Peace Prize. pic.twitter.com/2Rb2kHV3eB