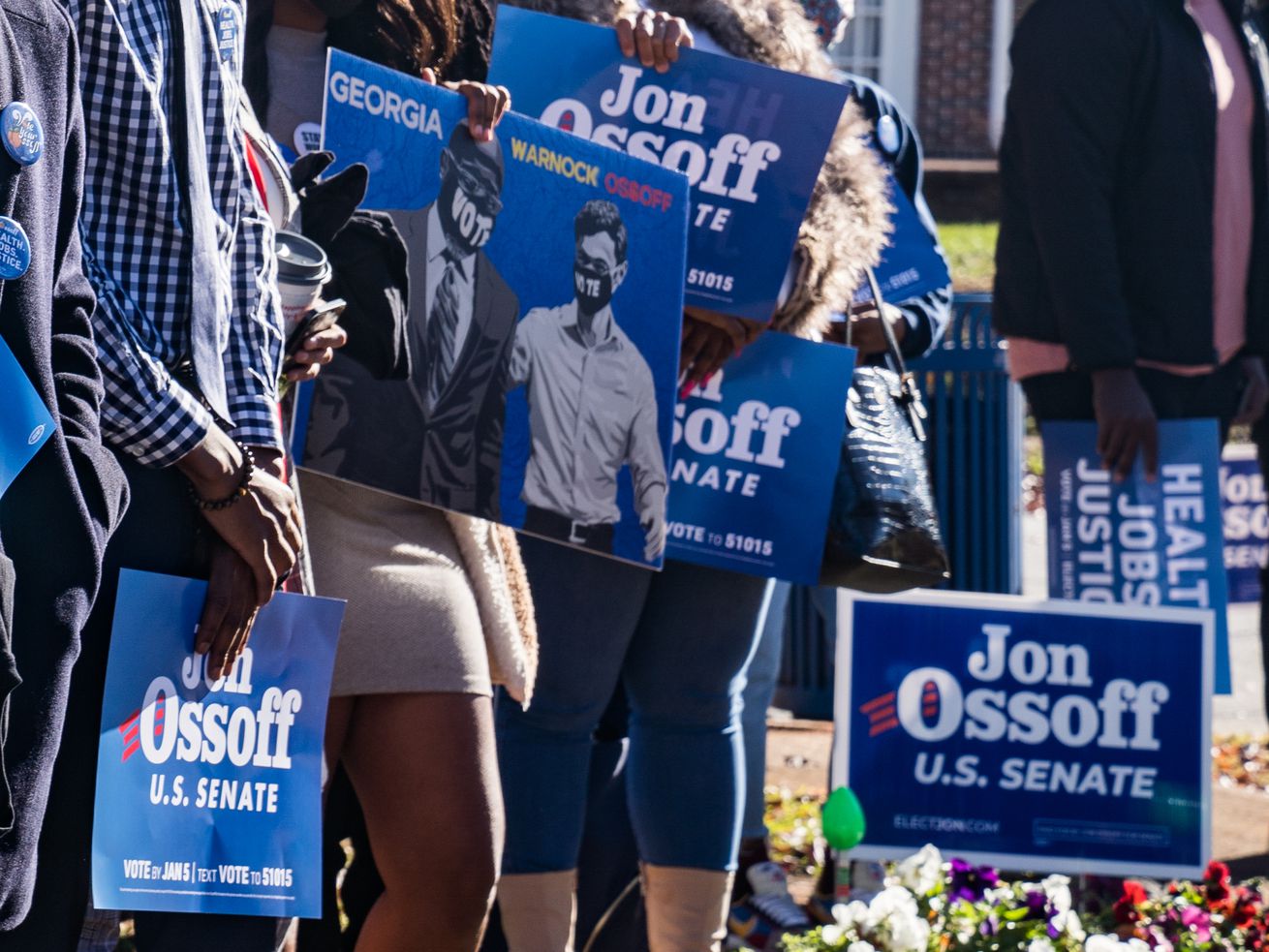 Supporters of Georgia Democratic Senate candidate Jon Ossoff hold signs while he speaks on December 22, 2020, at the Metropolitan Library in Atlanta, just prior to casting his early vote in January’s runoff election. | Megan Varner/Getty Images

Asian American voters in the state made a difference in November’s general election — and they could do so again.

James Woo, a 35-year-old marketing manager based in Peachtree Corners, has seen Georgia’s Asian American community change a lot since he moved there in middle school.

“Growing up here, there was like one big Asian supermarket,” Woo told Vox. Now, “People talk about Atlanta having the third-biggest Koreatown in the US.”

Woo, a spokesperson for the nonprofit Asian Americans Advancing Justice-Atlanta (AAAJ), has watched representation in government grow, too: When he started his job at AAAJ five years ago, there was just one Asian American and Pacific Islander (AAPI) lawmaker in the state legislature. In 2021, there will be six.

As a kid, “I didn’t even know that was an opportunity,” Woo said.

The AAPI population in Georgia has increased by 138 percent in the last 20 years, according to APIAVote, an organization focused on voter engagement. As more people move to the state to pursue employment opportunities and a more-affordable cost of living, Georgia has seen a large uptick in Black, Latino, and AAPI residents, along with corresponding gains in these groups’ political influence.

Per the Pew Research Center, eligible AAPI voters now account for roughly 3 percent of the state’s electorate, a notable jump from the 1 percent they comprised in 2000. And APIAVote estimates that about 238,000 eligible AAPI voters currently live in Georgia, including many new voters who’ve aged into the electorate or become naturalized citizens this cycle. 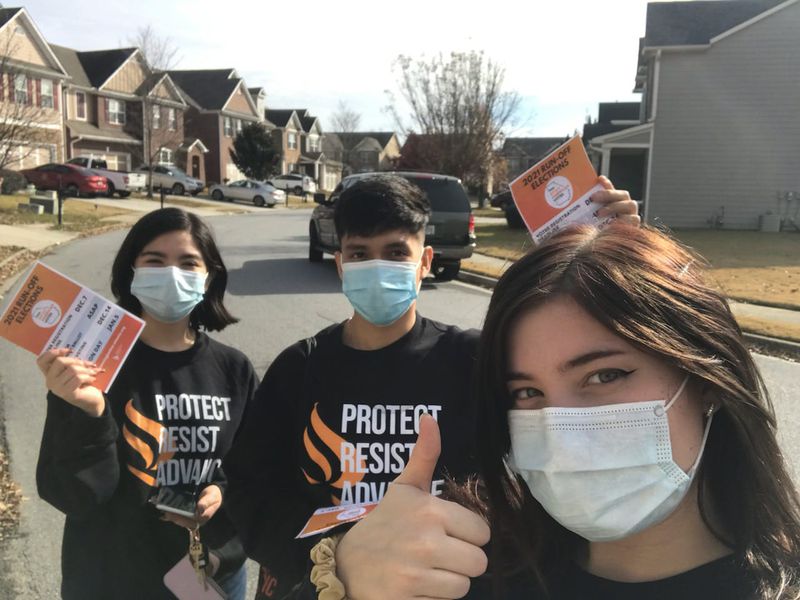 Such shifts were evident during the 2020 presidential election, when AAPI turnout increased more than that of any other demographic group in Georgia — helping President-elect Joe Biden clinch a win in the state. Compared with 2016, the number of AAPI people who voted early tripled, going from 40,000 to roughly 120,000 in 2020, according to the progressive data firm Catalist. And based on early exit polls, AAPI voters nationwide backed Biden by a 2-1 margin.

Now, AAPI voter engagement — the product of years of organizing by local groups including AAAJ-Atlanta, Fair Fight Action, and the New Georgia Project — could be decisive in the state’s Senate runoffs, which will determine which party controls the upper chamber for the next two years. As Biden’s narrow 12,000-vote margin of victory highlighted, AAPI voter support could help make the difference in what’s expected to be another close election.

“We made history just a few weeks ago,” said Linh Nguyen, the AAPI coalition director for the Georgia Democratic Party, “and we want to make history a second time.”

Organizers have been building to this moment for years

AAPI voters, a group that includes people of more than 15 different ethnicities, are far from a monolith: The largest AAPI ethnic groups in Georgia are Indian Americans, Chinese Americans, Korean Americans, Vietnamese Americans, and Filipino Americans, per APIAVote, and they encompass a wide range of ideological preferences as well as generational and cultural differences. Although the majority of AAPI voters nationwide backed Biden, roughly a third supported Trump in the general election.

Local organizers have invested heavily in targeted outreach that considers the community’s diversity and many credit them with the 2020 spike in AAPI turnout.

“The disproportionate increase in Asian American voter turnout is [part of] a multiyear process of empowering nonwhite voters in Georgia to really have control over the political process and their lives,” said Bernard Fraga, an associate professor of political science at Emory University. 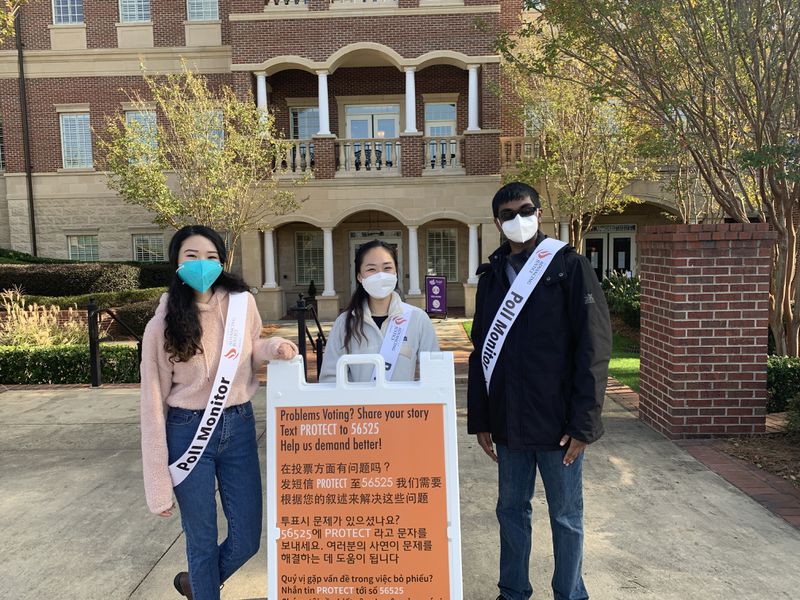 Historically, political campaigns have focused less on AAPI voters because of their lower turnout rates and the smaller proportion of the electorate they’ve comprised, an approach that can turn into a self-fulfilling prophecy. “Many of the voters I talked to, many of them had never had anyone talk to them before,” said Georgia state Rep. Bee Nguyen, referring to outreach she conducted in 2016, when she led state Rep. Sam Park’s campaign.

In the years since, it’s become apparent that AAPI voters are a key part of a diverse coalition that candidates need to win in Georgia.

Aisha Yaqoob Mahmood, director of the Asian American Advocacy Fund (AAAF), cites 2015 and 2016 as a major turning point in AAPI organizing efforts, thanks in part to increased investment. “2016 was the first year we had actual numbers to showcase as a voting bloc,” she noted.

Since then, more groups like the AAAF — a 501(c)(4) that can participate in partisan activities — have been established, and campaigns have increasingly taken notice.

Stacey Abrams’s 2018 gubernatorial campaign is frequently held up as one of the earliest — and most prominent — to place significant emphasis on AAPI voters in the state, driven by Abrams’s longtime focus on voting rights and increasing turnout among voters of color. “We tripled Asian Pacific Islander voting rates,” Abrams said in a 2019 speech highlighting how such efforts helped her come within less than 2 percentage points of now-Gov. Brian Kemp.

“Stacey was the first statewide candidate who talked about this broad-based coalition that included Black voters, brown voters, AAPI voters,” said Bee Nguyen. Jon Ossoff’s campaign for the US House of Representatives in a 2017 special election also focused on AAPI voters, she added.

According to a RealClearPolitics average, candidates in both Georgia Senate races — Ossoff and Rev. Raphael Warnock are running against incumbent Sens. David Perdue and Kelly Loeffler, respectively — are currently polling within roughly 1 or 2 percentage points of each other, which means outreach to every voter is critical.

“It ties back into having these really trusted messengers in the community,” said Jennifer Baik, APIAVote’s communications and policy associate. “Being able to enter these circles where the community gathers, being able to understand their specific needs.”

Neither Perdue nor Loeffler’s campaign immediately responded to Vox’s request for comment, though organizers say they’ve seen members of both parties trying to rally AAPI voters for the runoffs.

Materials from the Perdue and Loeffler campaigns echo the attacks against Ossoff and Warnock from national Republicans, who have tried to paint them as “radical leftists” with ties to China — a message that, in the past, has resonated with some more right-leaning AAPI voters, especially those who have immigrated from countries with Communist governments, such as China and Vietnam.

One of Democrats’ main messages, meanwhile, is the importance of health care access and combating the pandemic — a core issue for many AAPI voters as a result of Georgia being hit hard by the coronavirus. “We need people who recognize that we’re in a pandemic and follow science,” Bee Nguyen said. “People … who are not racist and xenophobic and believe that immigrants are part of this country.”

Immigration reform is another policy area of importance to voters and organizers. Specific issues they’ve highlighted include establishing a pathway to citizenship for DACA recipients — thousands of whom are AAPI — as well as changes to local policies such as participation in the 287(g) program, which allows law enforcement agencies to work with ICE and detain immigrants. 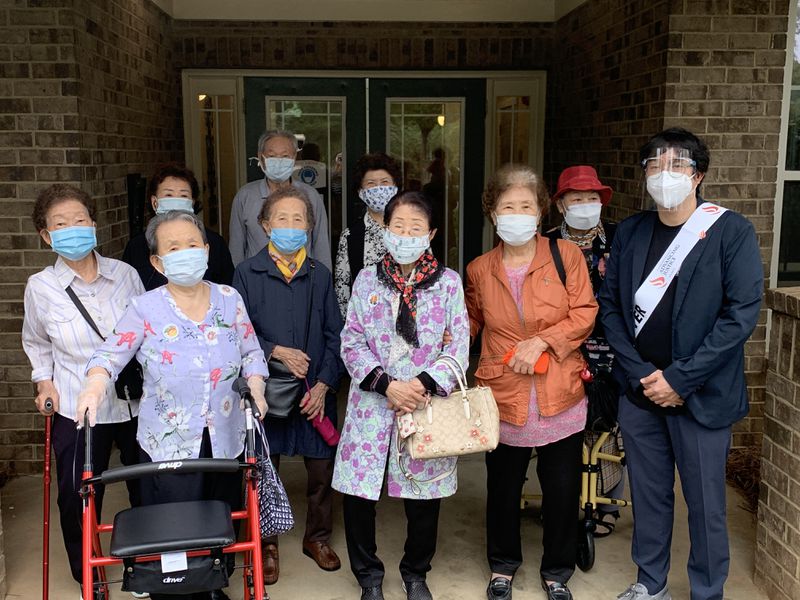 James Woo / AAAJ-Atlanta
AAAJ-Atlanta’s James Woo heads to the polls with a group of voters.

During both the presidential and Senate races, organizers have also made in-language communication a chief focus, since 43 percent of AAPI voters in Georgia say they don’t speak English well.

AAAF currently does phone banking and texting in 11 different languages, including Hindi, Chinese, Korean, Vietnamese, Tagalog, and Japanese. And it’s worked, alongside efforts by AAAJ-Atlanta and other groups to provide accessible and translated information about voter registration, absentee ballot requests, and polling locations, since that’s not readily available in much of the state. DeKalb County, which encompasses part of Atlanta and its suburbs, is one of the few that provides a translated ballot, said Woo.

“There’s almost an immediate level of trust and an immediate relationship that can be built because the voter is talking with someone they can relate to,” said Nina Reddy, a voter engagement organizer with the National Asian Pacific American Women’s Forum, regarding in-language outreach.

Organizers have also used multiple platforms to connect with new voters. Aside from ethnic print, radio, and television outlets, they’re on social media apps like WeChat, KakaoTalk, and WhatsApp, which are popular among Chinese Americans, Korean Americans, and Indian Americans, respectively. AAAF is working with 15 to 20 community leaders, including church heads, to amplify messages on social media and help counter inaccurate reports.

“There are a lot of group chats that have over a hundred people and we can use them to combat a lot of this misinformation that’s going out,” Woo said of AAAJ-Atlanta’s work. As Vox’s Terry Nguyen previously reported, misinformation specifically aimed at AAPI voters, including stories about voter fraud, spread rampantly on social media during the general election.

Many organizers say they’re bringing back in-person door-knocking for the runoffs as well, while ensuring that those involved are equipped with the protection they need during the pandemic. “We can’t just rely on phones and text messages, our community is limited English proficient, and we have a lot of elders,” said AAAF’s Yaqoob Mahmood. Getting existing AAPI voters to turn out their friends and family is another way they’ve tried to mobilize more people, too. “If we’re able to talk to someone in their family, it becomes more of a family activity,” Reddy said.

The pressure to turn out the same voters who participated in the general election is immense, given how high the stakes are. “More than ever, Asian American voters have been outreached to during the runoffs,” Reddy added.

Georgia has highlighted the power of AAPI voters

In the general election — and, likely, in the runoffs — Georgia has offered a glimpse of the influence AAPI voters can have, sending a pointed message to both parties about investing in them. Even in the most recent presidential cycle, about half of AAPI voters nationwide said they hadn’t heard from either Democrats or Republicans, highlighting a key gap.

“The AAPI community hasn’t flexed its full voting potential just yet. We are only just starting to invest in this outreach with real resources and making sure it’s not just one AAPI person overseeing this incredibly complex and nuanced community,” said Linh Nguyen.

Organizers plan to keep on mobilizing the AAPI community after the runoffs, including training for more AAPI candidates, mutual aid efforts, and advocacy around immigration policy. “We’re not just closing up shop after an election,” Yaqoob Mahmood said.

AAPI voter engagement in Georgia is also a sign of how much sway they could have in other swing states, such as North Carolina and Pennsylvania, both of which have growing AAPI electorates as well.

“AAPI nationwide are the fastest-growing demographic population in the country,” said Roshni Nedungadi, a partner at HIT Strategies. “In a lot of key states and congressional districts, AAPI vote could be the margin between a win and loss.”