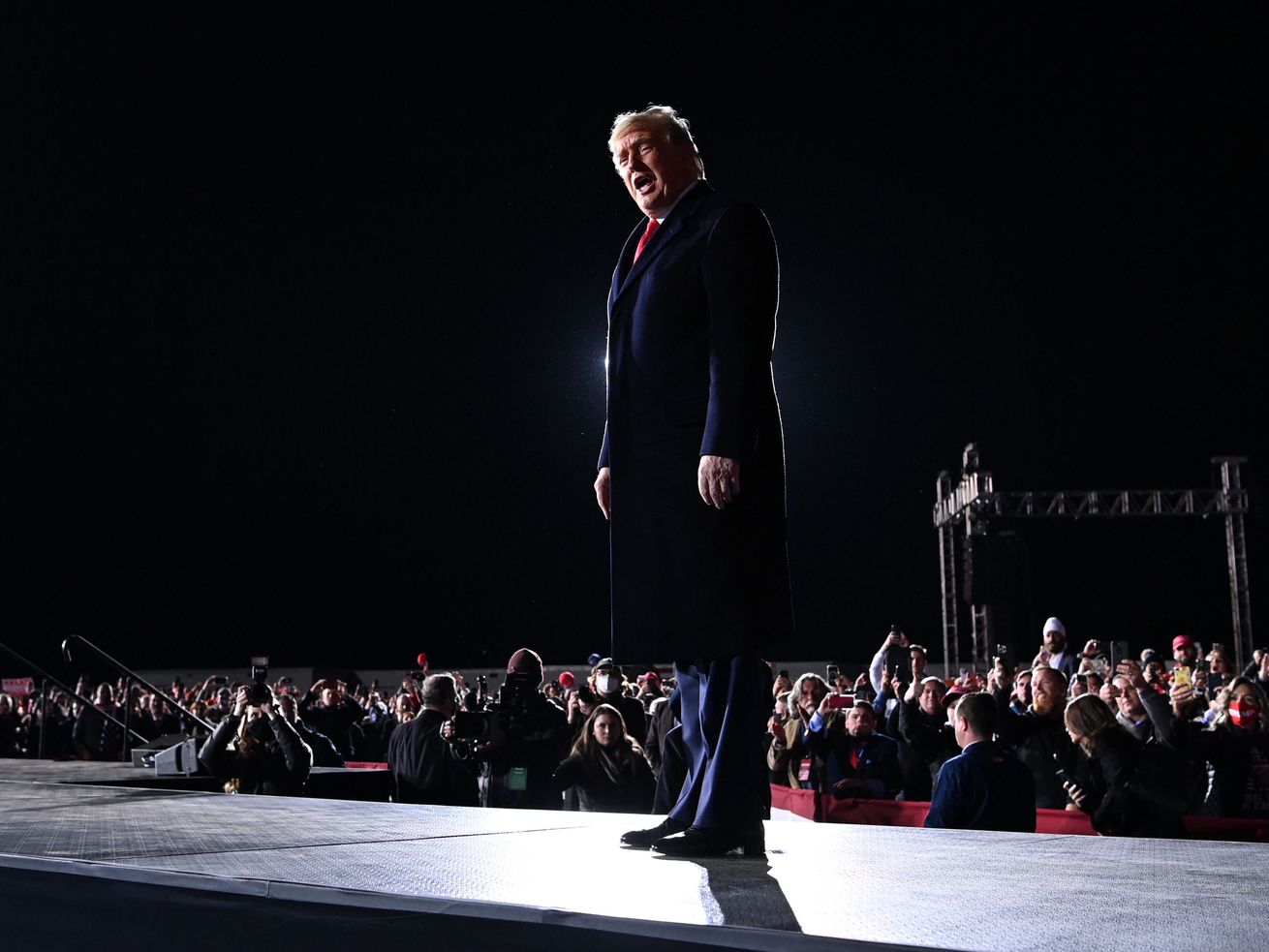 Trump arrives at his rally in Dalton, Georgia, on Monday. | Mandel Ngan/AFP via Getty Images

Surprise! It ended up being about himself.

President Donald Trump’s trip to Dalton, Georgia on Monday evening was ostensibly about stumping for Republican Sens. David Perdue and Kelly Loeffler ahead of their hard-fought runoff elections on Tuesday. Predictably, however, Trump spent much of what’s likely to be his last rally as president whining about his loss to President-elect Joe Biden and pushing unfounded conspiracy theories about the election being stolen from him.

In fact, the very first words out of Trump’s mouth after “Hello, Georgia,” were: “By the way — there’s no way we lost Georgia. There’s no way. That was a rigged election.”

“Hello, Georgia. By the way — there’s no way we lost Georgia. There’s no way. That was a rigged election.” — the first words out of Trump’s mouth in Dalton, Georgia pic.twitter.com/JBlBDFKloU

During the early part of his speech, Trump went through the motions of trying to promote Perdue and Loeffler, but his heart didn’t really seem in it. Trump didn’t seem to realize that Perdue wasn’t actually in attendance (he’s quarantining after a Covid-19 exposure) and instead of mustering much enthusiasm for the senators, Trump’s followers spent much of the rally chanting things like “fight for Trump!” and “stop the steal!”

As you’d expect, Trump spent a good bit of time rubbing his own sores. He criticized the Supreme Court for “not stepping up” for him and, along similar lines, blasted Georgia’s Republican governor and secretary of state — Brian Kemp and Brad Raffensperger, respectively — for not helping him steal the election.

“I’ll be here in about a year and a half campaigning against your governor, I guarantee you,” Trump said about Kemp.

“I’ll be here in about a year and a half campaigning against your governor, I guarantee you” — Trump has now pivoted to bashing Georgia’s Republican governor and secretary of state pic.twitter.com/KKP2v7z8bw

The speech came a day after the Washington Post published bombshell audio of a phone call from over the weekend in which Trump unsuccessfully tried to bully Raffensperger into helping him “find” enough votes in the state to overcome his loss to Biden. The call was widely criticized and as my colleague Ian Millhiser wrote was “most likely a criminal offense,” but Trump — stealing a page from his impeachment playbook — tried to turn reality on its head by proclaiming, “everyone loved my phone call.”

“Everyone loved my phone call” — Trump on his widely criticized phone call with the Georgia secretary of state in which he tried to bully him into helping him steal the election pic.twitter.com/ZpCoSIi1KO

Other greatest hits that Trump revisited on Monday including basking in “lock her up!” chants directed at Hillary Clinton, bashing the media — including Fox News, and winking and nodding toward the deranged QAnon conspiracy theory.

Notably, the coronavirus pandemic was never mentioned at a rally in which many attendees were packed together and mostly not wearing masks.

Loeffler seemed to understand the importance of putting Trump first. When she took to the stage for brief remarks, she immediately announced that she’s joining a group of Republican senators who during a congressional proceeding on Wednesday plan to challenge Biden’s Electoral College win, saying, “I have an announcement, Georgia. On January 6, I will object to the Electoral College vote. That’s right. We’re gonna get this done!”

“I’ll be here in about a year and a half campaigning against your governor, I guarantee you” — Trump has now pivoted to bashing Georgia’s Republican governor and secretary of state pic.twitter.com/KKP2v7z8bw

But statements of that sort weren’t enough to close the audience’s obvious enthusiasm gap. On numerous occasions cameras panned across obviously bored and silent faces as Trump offered praise for Loeffler and Perdue that didn’t go much beyond their support for him.

Take a gander at how bored Trump’s followers look as he tries to pump up David Perdue pic.twitter.com/SVIItgzkZs

Throughout the rally, Trump tried to keep hope alive that he still might serve another term in office. He suggested congressional proceedings on Wednesday in which his Electoral College loss to Biden will be certified might produce a drastic reversal of fortunes, even while it’s quite clear — given the fact most lawmakers plan to vote to certify the vote — it won’t.

At one point the president said, “I hope Mike Pence comes through for us” — suggesting the vice president, who will oversee Wednesday’s hearing, might attempt to overturn the results in the eleventh hour — and at others he openly pressured Sen. Mike Lee (R-UT) to join a group of Republican senators who have announced they plan to challenge the electoral results.

“MIke Lee is here, too. But I’m a little angry at him today,” Trump said, alluding to Lee’s refusal (so far) to join the Republican effort to challenge the results.

But at other points, Trump spoke about his presidency in the past tense, lamenting (falsely) that Mexico “is paying” for his border wall — but then adding, “or if I were here, they would be.”

But beyond caricaturing Perdue and Loeffler’s opponents as radical socialists, Trump failed to explain why his supporters should have much confidence that the runoffs won’t be rigged like he claims the presidential election was.

Overall, as Trump read lines from his pre-presidential stump speech without even bothering to update them to reflect the reality that the election is over and he lost, it became clear he was mostly mailing it in.

“We will never, ever surrender,” Trump said toward the end of his nearly 90-minute speech — and in case it wasn’t obvious, he was talking about himself. Regardless of what happens during Tuesday’s runoffs, for Trump, by Wednesday it will be an afterthought.

Source: Trump’s last rally as president was supposed to be about the Georgia runoffs. It wasn’t.