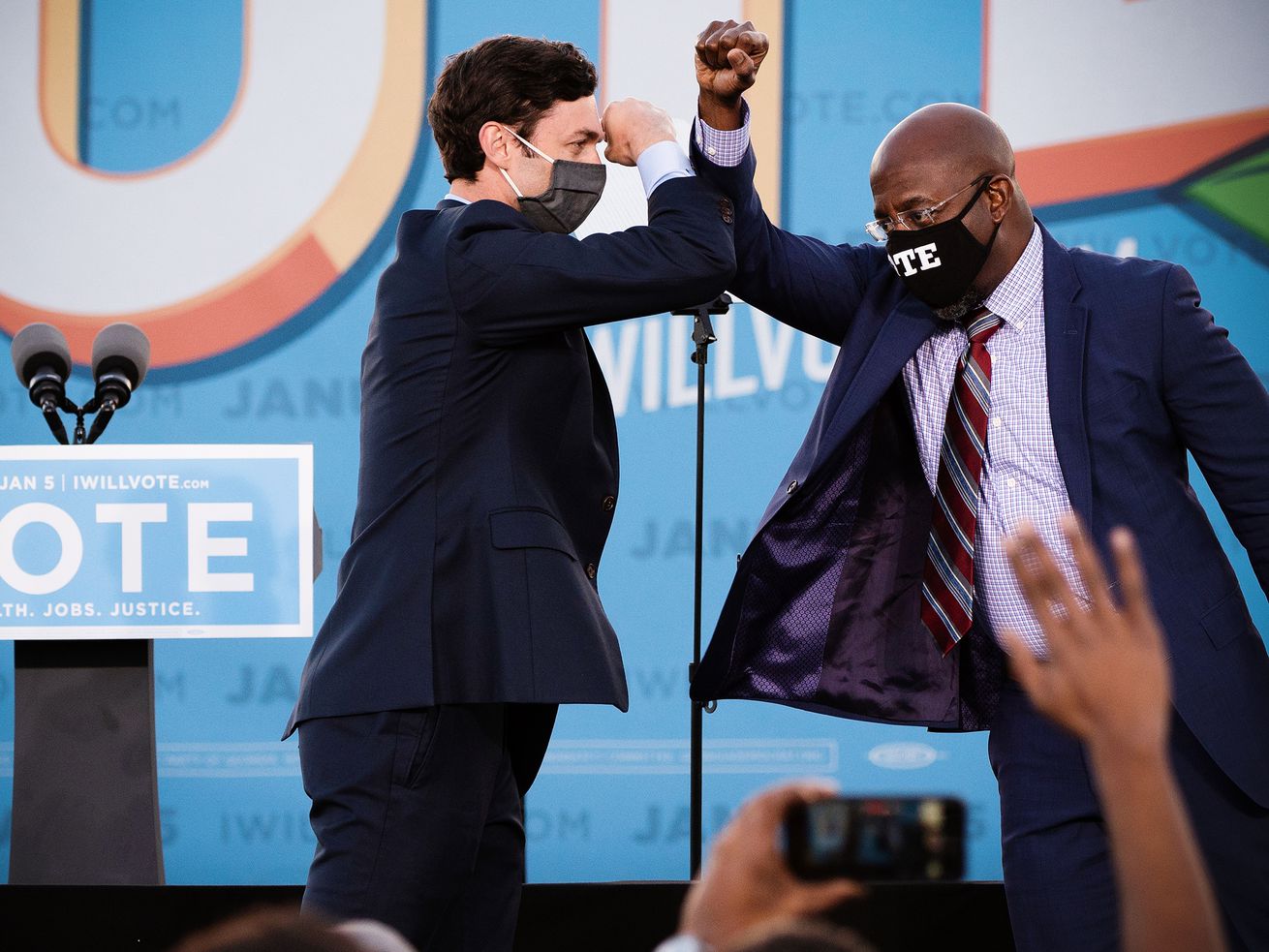 Democrats will hold the edge with a split Senate, giving them a shot at governing.

Winning a pair of January 5 Senate runoffs in Georgia, Democrats have regained control of the US Senate, but just barely.

By capturing Georgia’s Senate seats — an impressive feat few political observers thought likely after the November election — Democrats have given themselves the barest of Senate majorities. They are technically split 50-50 with Republicans, with Vice President-elect Kamala Harris serving as the tie-breaker for simple majority votes. Importantly, though, it will be Democrat Chuck Schumer, not Republican Mitch McConnell, who will hold the title of majority leader.

Tuesday’s victory solidifies the party’s control of Congress as President-elect Joe Biden prepares to take office with an ambitious policy agenda. It guarantees Democrats will at least be able to decide what bills make it to the Senate floor, as well as be able to more easily confirm Biden’s Cabinet appointments and judicial nominees. 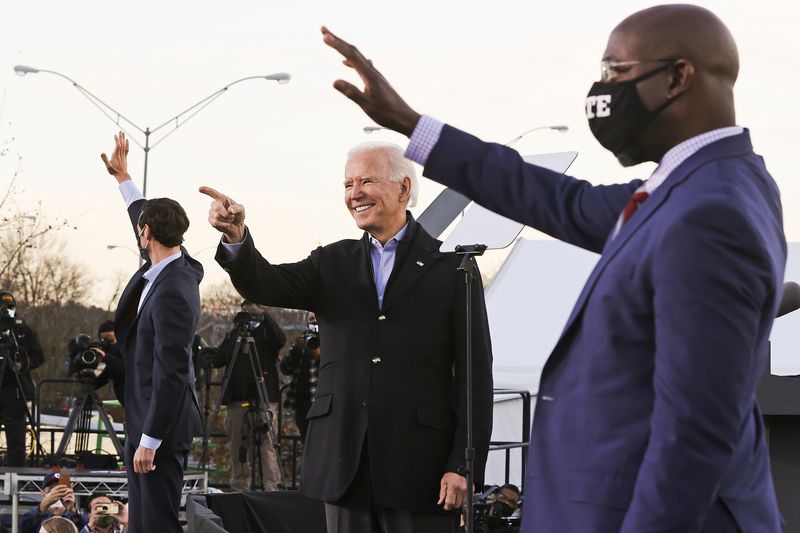 Still, Democrats will have to get buy-in from at least 10 additional Republican senators in order to clear the 60-vote threshold needed to pass most major bills. They may be able to work around the filibuster in budget reconciliation bills, but getting broad bipartisan support to pass most legislation will be unavoidable.

Senate Democrats and Biden clearly see their first priorities as trying to curb the spread of Covid-19 with additional relief and funding for vaccine distribution and a more coordinated federal and state response to the pandemic. Economic recovery is another immediate priority, which could include an infrastructure package.

“We feel a great sense of responsibility and a great sense of urgency,” Sen. Debbie Stabenow (D-MI), chair of the Senate Democratic Policy and Communications Committee, told Vox last fall. “There’s so much that has to be rebuilt and repaired, but it has to start with getting our arms around this once-in-a-generation pandemic.”

Infrastructure could be one of the few opportunities for bipartisanship; a number of moderate Republicans are willing to work on such a bill, but other Republicans have already begun to raise concerns about the national deficit and additional spending after themselves passing a massive tax cut in 2017 that ballooned the deficit. Still, Biden, who served as a senator for decades before becoming Obama’s vice president, has a long working relationship with McConnell in the Senate. This could prove to be an asset going into his presidency.

“President-elect Biden, one of his strengths is reaching out and finding common ground,” Phil Schiliro, who served as President Barack Obama’s legislative director, told Vox. Schiliro added that Biden and McConnell “have a shared experience and history in the Senate; they have a shared respect for the Senate, and I think that’s helpful.”

Realistically, the likelier scenario for a closely divided Senate is more partisan gridlock.

What Democrats want to do

Democrats widely agree a new Covid-19 relief and response package should be their first priority. A new bill would likely be modeled on the House-passed HEROES Act, which included $75 million for testing and contact tracing, “strike teams” to tackle challenges around long-term care and prisons, and funding to help cash-strapped state and local governments.

Next, Democrats say they want to deal with the stagnating economy. Biden has released a $2 trillion green jobs plan, aiming to create millions of jobs through green infrastructure, retrofitting houses, and manufacturing electric cars, among other things. There are a number of ways Biden’s White House can work on achieving these goals, but he needs Congress to fully realize it.

“In addition to fighting and containing the coronavirus, we will work aggressively to create jobs and improve the unemployment crisis caused by President Trump,” Senate Minority Leader Chuck Schumer told Vox in a statement earlier this fall. 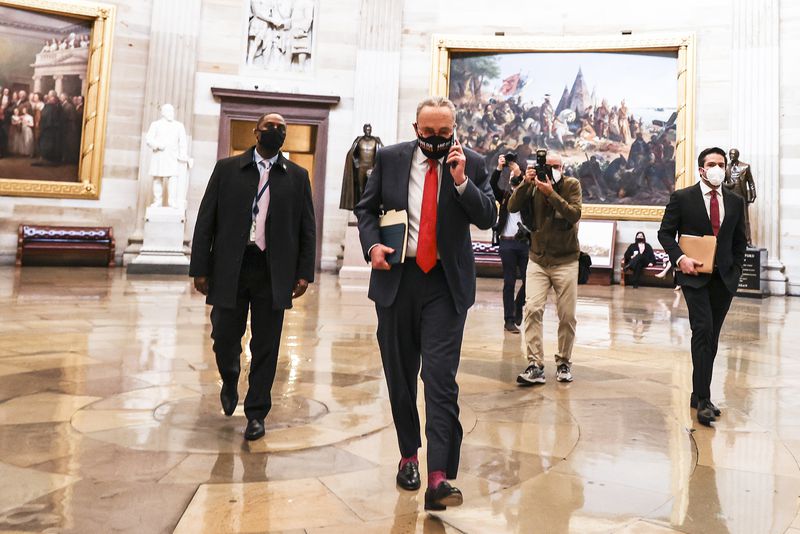 Biden shares the broad goal of getting the United States to net-zero emissions by 2050, but he’s also set more aggressive targets, like getting to 100 percent clean electricity in the US by 2035. House Democrats also passed a $1.5 trillion infrastructure bill in July, which could be merged with Biden’s climate plan.

Democrats will likely push for a climate component in any future infrastructure package, but Republicans may balk at that idea and push for a more targeted bill.

Democrats have a long wish list of other priorities including anti-corruption reforms and legislation to expand voting rights (which, again, is the first bill that will be taken up by the US House), policing reforms, and a public option to expand access to health care as well as immigration reform and universal background checks for guns.

Many of these will have to be put on the back burner for now, as Democrats have limited political capital — and the thinnest possible majority to do anything.

Senate Democrats and the filibuster

Once again, Democrats fall short of the filibuster-proof 60-vote Senate majority — by a whopping 10 votes.

The last time Democrats won a majority in the Senate was in 2008, when they rode Obama’s coattails to victory. They had 59 votes in the Senate, far more than Democrats do now.

Obama was able to pull over a few Republican Senate votes in 2009 to pass the American Recovery and Reinvestment Act after the 2008 financial crisis. But on many other legislative priorities, McConnell’s Republican minority threw up a 60-vote barrier to passing most Democratic legislation.

McConnell admitted two years into the Obama era that he had planned to do everything he could to ensure the Obama presidency was “one term.” The former president wrote in his new memoir that the filibuster “would prove to be the most chronic political headache of my presidency.” 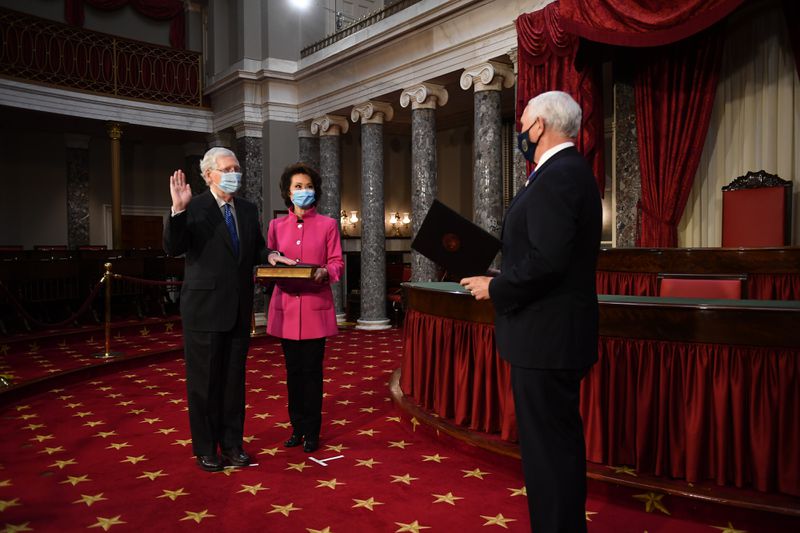 “With President Obama, no matter how much outreach he tried to do with Congressional Republicans, there seemed to be absolutely no interest and no acceptance with what he was trying to do,” Schiliro said. “If congressional Republicans take that approach this time, it will be very difficult to get anything done.”

Democrats have a few options with 51 votes: attempt to work with Republicans on bipartisan issues, or pass big items through a process known as budget reconciliation that only requires a simple majority. Much less likely is blowing up the Senate filibuster. Doing so would require 51 votes, but moderate Democrats like Sen. Joe Manchin (WV) have unequivocally said they’re opposed.

“That would break the Senate,” Manchin told the New York Times’s Luke Broadwater recently. “If you basically do away with the filibuster altogether for legislation, you won’t have the Senate. You’re a glorified House. And I will not do that.”

Still, some Democrats may continue to push for filibuster elimination or reform by a simple majority. Their argument? Don’t assume Senate Republicans are going to do the right thing.

“Basically, every member of the conference is concerned about not letting McConnell paralyze the place,” Sen. Jeff Merkley (D-OR), the Democrat leading talks about filibuster reform, told Vox earlier this year.

Source: Democrats win the Senate — by the slimmest margin possible