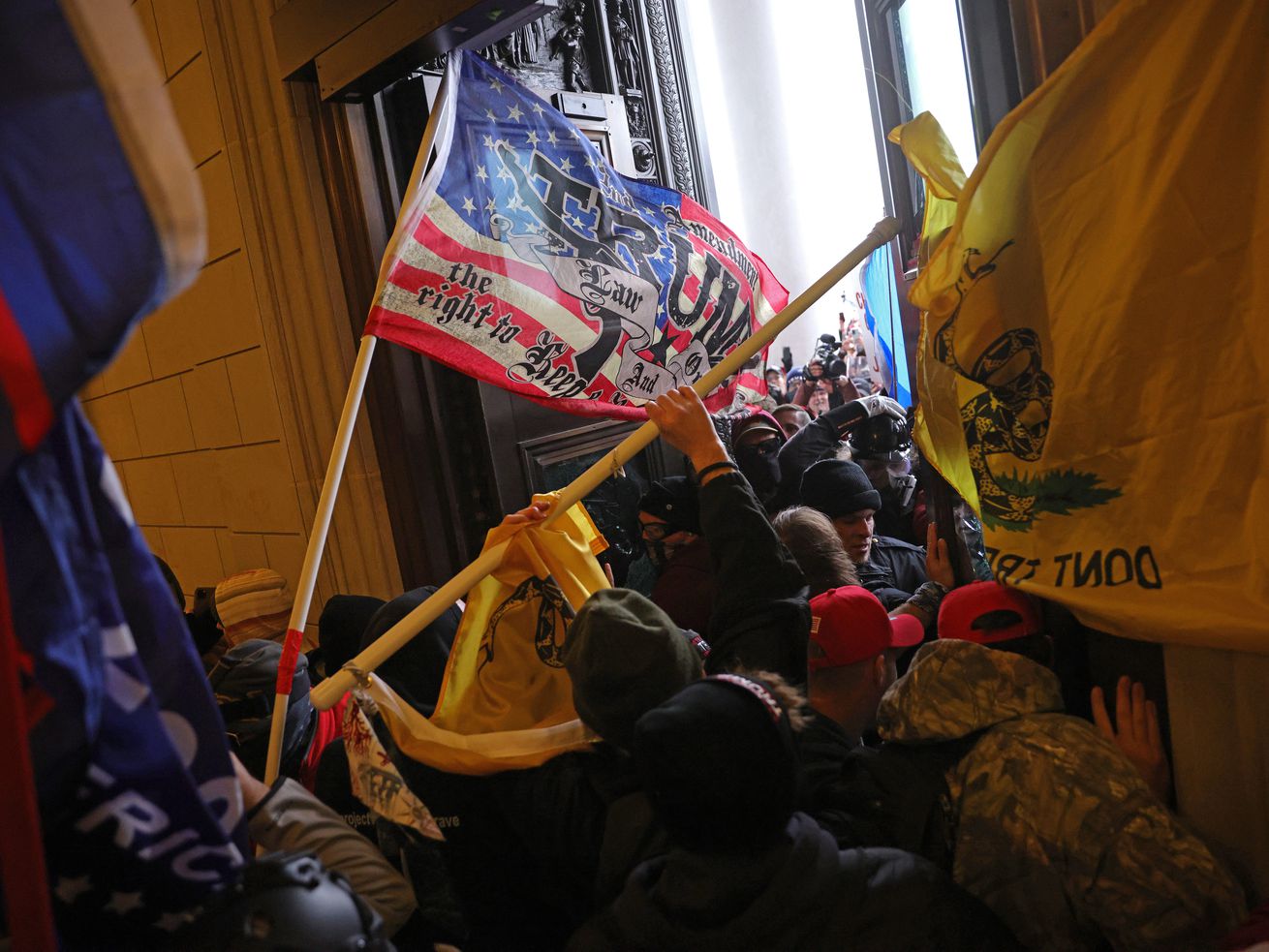 He instead released a video message legitimizing their conspiracy theories.

As chaotic and violent scenes unfolded at the US Capitol following the hasty evacuation of lawmakers from the House and Senate floors, Republicans pleaded with President Donald Trump to tell his insurgent supporters to stand down.

On CNN, Rep. Mike Gallagher (R-WI) said, “I’ve not seen anything like this since I deployed to Iraq … The president needs to call it off. Call it off. It’s over. The election is over.”

Republican Rep. Mike Gallagher: “I haven’t seen anything like this since I deployed to Iraq … this president needs to call it off. It’s over. The election is over.” pic.twitter.com/TMj0FhYhlX

Gallagher’s sentiment was echoed by Rep. Adam Kinzinger (R-IL), who told CNN that Trump’s tweets calling for his supporters to refrain from violence weren’t enough.

“He needs to stand up and say, ‘I lost the election,’” Kinzinger said.

“He needs to stand up and say, ‘I lost the election.'” — @RepKinzinger pic.twitter.com/1TPn0gMvhO

Trump, however, has thus far refused to do so. At 4:17 pm ET, he posted on Twitter a pretaped video message in which he reiterated some of the incendiary lies about the election that helped radicalize his followers in the first place.

“We had an election that was stolen from us. … This was a fraudulent election,” Trump lied, before calling on the mob to “go home in peace.”

“We love you. You’re very special. … I know how you feel,” Trump said.

A Trump-supporting mob rushed the Capitol shortly after the president delivered an angry speech near the White House around noon, in which he called on the crowd to “walk down Pennsylvania Avenue” and put pressure on Republicans — including Gallagher and Kinzinger — who planned to certify results stating that President-elect Joe Biden won the 2020 election.

“You’ll never take back our country with weakness. You have to show strength,” Trump said.

“You’ll never take back our country with weakness. You have to show strength,” says Trump, before demanding that Congress try to overthrow the election results pic.twitter.com/EXvUDv0U3e

The president’s speech was the last in a series of speeches Wednesday in which Trumpworld luminaries poured fuel on the fire. Rep. Mo Brooks (R-AL) began the day by saying, “Today is the day American patriots start taking down names and kicking ass!” Rudy Giuliani followed that up by calling for a “trial by combat.”

“Over the next 10 days, we get to see the machines that are crooked, the ballots that are fraudulent. And if we’re wrong, we will be made fools of. But if we’re right, and lot of them will go to jail. So — let’s have trial by combat” — Giuliani pic.twitter.com/QAYvnplCj7

But as the Capitol was invaded and news broke that at least one woman had been shot and critically injured, Giuliani and others who have encouraged this kind of extreme behavior in the president’s supporters, including Donald Trump Jr., suddenly changed their tune and called for calm.

To all those patriots challenging the fraudulent election , POTUS wants you to EXPRESS YOUR OPINION PEACEFULLY,We are the law and order party,You are on the right side of the law and history.Act with respect for all.

As did Republicans such as Sen. Lindsey Graham (R-SC), who repeatedly refused to refute Trump’s false claims that Biden lost the election and who did little to discourage Trump’s extreme rhetoric and that of his allies.

“I support peaceful protests but not violence and destruction,” Graham tweeted. “People need to leave the Capitol now!”

Just ahead of 4 pm ET, House Speaker Nancy Pelosi and Senate Minority Leader Chuck Schumer released a statement demanding that Trump tell the crowd to leave the Capitol. But as of publication time, that hasn’t happened. Instead, Trump was watching the chaos on TV, Jim Acosta of CNN reported.

The president has done little to stop his supporters. Following his speech, Trump returned to the White House and fired off a tweet blasting Vice President Mike Pence for not having the “courage” to try and overthrow the Electoral College result. Shortly before Biden appeared on television to plead for an end to the rioting, Trump followed up his Pence tweet with an Orwellian missive in which he called for his supporters to “remain peaceful,” adding, “WE are the Party of Law & Order.”

I am asking for everyone at the U.S. Capitol to remain peaceful. No violence! Remember, WE are the Party of Law & Order – respect the Law and our great men and women in Blue. Thank you!

Shortly after 4 pm, Biden gave a speech in which he called for Trump “to go on national television now to fulfill his oath and defend the Constitution and demand an end to this siege.”

Biden: “The words of a president matter no matter how good or bad that president is … I call on President Trump to go on national television now to fulfill his oath and defend the Constitution and demand an end to this siege.” pic.twitter.com/MSDhGmia3C

“The words of a president matter, no matter how good or bad that president is,” Biden added.

But instead of heeding calls from Biden and others to speak out forcefully in the hope of ending the violence and chaos, Trump posted a video legitimizing the mob’s concerns.

Source: Republicans plead with Trump to denounce violent mob that breached the Capitol