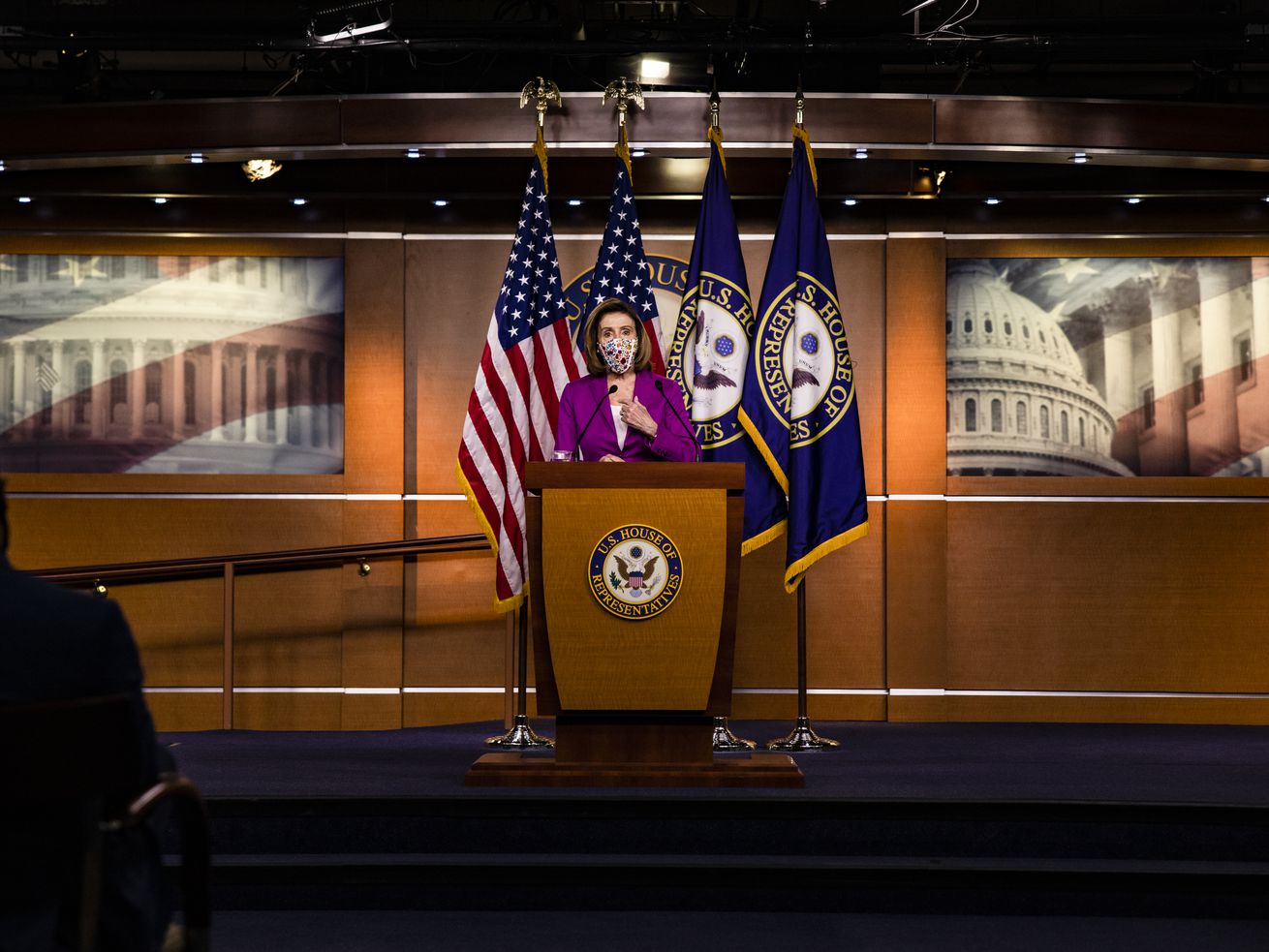 House Speaker Nancy Pelosi calls for the removal of President Donald Trump from office at the Capitol on January 7. | Getty Images

But will he actually be removed from office before his term expires?

House Democrats have coalesced around their strategy for responding to President Donald Trump’s incitement of the chaos and violence at the Capitol Wednesday — they are moving toward impeaching him for a second time, before his term in office expires on January 20.

According to CNN’s Lauren Fox, Manu Raju, and Jeremy Herb, House Democratic leaders are currently weighing a vote on articles of impeachment as soon as the middle of next week. They would bring the articles straight to a floor vote, rather than going through the committee process, Assistant House Speaker Katherine Clark (D-MA) said on CNN Friday morning.

It’s unclear what exactly those articles will be, but Rep. David Cicilline (D-RI) and Rep. Ilhan Omar (D-MN) each posted draft impeachment articles on Twitter. Cicilline’s draft (supported by more than 110 House Democrats) accuses Trump of “willfully inciting violence against the Government of the United States,” and Omar’s says Trump “abused the powers of the Presidency to incite violence and orchestrate an attempted coup against our country.”

In addition to Trump’s role in inciting violence at the Capitol, both drafts also focus on Trump’s broader attempts to overturn the election results, including his request in a phone call that Georgia Secretary of State Brad Raffensperger “find” votes for him. The final articles of impeachment used will likely be crafted by House leadership and House Judiciary Chair Jerry Nadler (D-NY) in consultation with members.

The news of Democrats’ plans came shortly after the death toll rose to five, as Capitol police officer Brian Sicknick died from injuries sustained during the riot. Four others also died, including a Trump supporter shot by Capitol police and three people with medical emergencies during the chaos.

Trump is only in office for 12 more days. But Democrats are offering several justifications for an impeachment push anyway. First, they are simply irate about what happened and think there should be consequences for Trump, even if those consequences are only making him the first-ever president to be impeached twice. Second, some worry Trump cannot be trusted to turn over power. Third, one potential consequence of an impeachment conviction would be a ban on Trump holding future federal office — which would prevent him from getting the presidency back in 2024.

Yet impeachment by the House alone has no practical effect other than kicking the matter to the Senate, and Trump would stay in office unless the Senate convicts him. It’s far from clear that Mitch McConnell — who is still majority leader until the Georgia special election results are certified, which could take until late January — will agree to quickly hold an impeachment trial for Trump. If he does so, it would take a two-thirds vote in the chamber to convict Trump — which would require 18 Republicans (17 after Raphael Warnock and Jon Ossoff are sworn in).

Impeachment supporters heard an encouraging response Friday morning from one Republican senator — Ben Sasse (R-NE), who has harshly criticized Trump’s conduct this week, said he would “consider” any articles of impeachment that the House sends to him.

However, on Wednesday night, Sen. Mitt Romney (R-UT), the sole Republican senator who voted in favor of removing Trump from office for the previous impeachment, said that he didn’t feel there was enough time left to impeach Trump. And Sen. Lindsey Graham (R-SC) tweeted Friday morning that he believed impeachment would “do more harm than good” and that it is “time to heal.”

Source: Democrats are moving toward impeaching President Trump for his post-election conduct