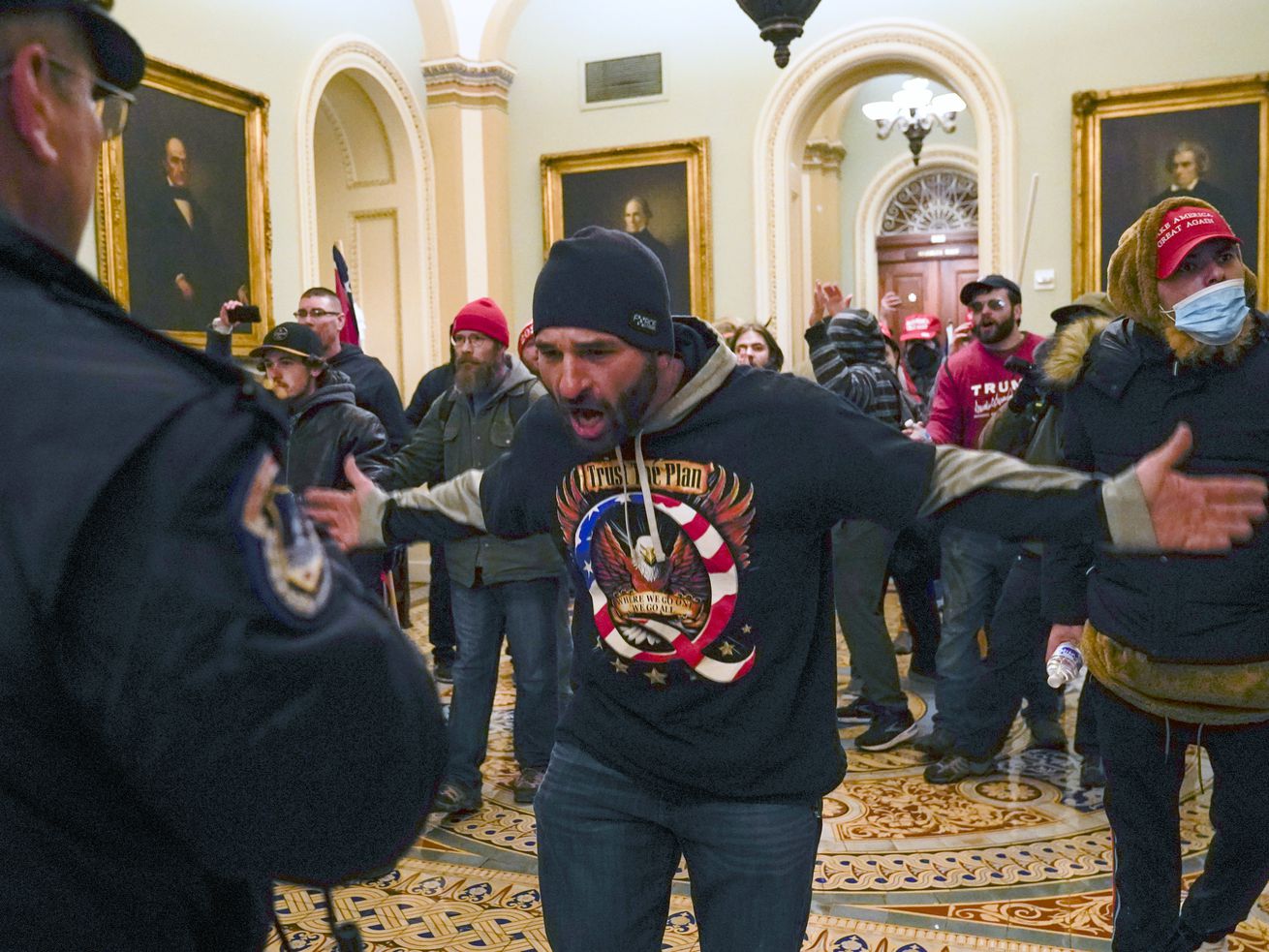 Trump supporters gesture to Capitol Police officers outside the Senate chamber at the Capitol on January 6. | Manuel Balce Ceneta/AP

“It’s like a hall of mirrors”: The online far right’s disordered response to the storming of the Capitol.

In the wake of pro-Trump extremists invading the Capitol, the online right displayed fault lines as it publicly processed the events of the past week.

Clear arguments and ideas are gaining traction and some have even been repeated by members of Congress. On Facebook, Twitter, Reddit, the message board TheDonald, and Parler, a “free speech social network” created in opposition to Twitter, some users blamed antifa for the attack while others claimed credit for it. Meanwhile, others were angry at the president for posting a video Thursday acknowledging a “new administration” would take over.

Even as the online right is divided about how to react to the events of this week, loyalty to President Donald Trump is still strong. Many online supporters refer to him as “GEOTUS,” or Grand Emperor of the United States, and have called fellow members to stand by him.

But there is fracturing within the movement: Some are confused about why they were asked to come to the January 6 rally if not to take extreme action, others are angry at Trump’s concession video posted on Twitter Thursday night where he described Wednesday’s events as a “heinous attack,” and others still are developing new conspiracy theories.

Ashley Babbit’s last stream. She believed she was doing her patriotic duty, she died wrapped in a flag that said Trump 2020. Yet Trump betrayed her, and Pence’s secret service killed her.I’m not even American and I can’t stand this shameful betrayal. pic.twitter.com/cA3SSD30sx

“It’s like a hall of mirrors,” said Jessica Stern, a Boston University global studies professor and expert on terrorism. People on these platforms want to communicate with one another and strategize, but at the same time they’re using these platforms to boast, make niche jokes, and taunt law enforcement, she told Vox.

It’s hard to know how seriously to take any individual threat or comment made by members of these forums. Distinguishing between legitimate threats and trolling is difficult — and that reality is mirrored by the president himself. Trump will make “jokes” that target groups or individuals and undermine democratic norms. His supporters casually dismissed criticisms of these comments, or chastised observers for taking the president literally.

With five people dead, the time for parsing such distinctions has to be over.

In the hours following the storming of the Capitol on January 6, Vox reported on the baseless yet quickly proliferating rumor that antifa activists were behind the violence in Washington. Within hours, a theory that started in Twitter replies and message boards was being repeated publicly by Republican Reps. Paul Gosar, Mo Brooks, and Matt Gaetz. The latter went so far as to cite a now-retracted article from the Washington Times which falsely alleged that a facial recognition company had identified members of antifa. In reality, the company, XRVision, had found “two members of neo-Nazi organizations and a QAnon supporter among the pro-Trump mob,” according to BuzzFeed News.

Others on these forums began calling out what they perceived as hypocritical treatment from the police and the media compared to Black Lives Matter (BLM) and antifa. “I watched cops kneel to BLM and antifa,” one commenter wrote. Another angrily pointed out that his social media friends were “perfectly fine with BLM shooting people up months ago” — insinuating that they should be fine with the violence at the Capitol, though it’s not clear what he’s referencing, as Black Lives Matter protesters have not “shot up” anyone.

A perception that law enforcement is more lenient on the left is almost certainly false — Vox’s Fabiola Cineas reported on new research finding that law enforcement is harsher on left-wing protests than ones conducted by right-wing groups. Researchers wrote: “When authorities engage demonstrations associated with the right-wing, they use force nearly one-third or 34% of the time. Meanwhile, authorities use force in demonstrations associated with the left-wing over half or 51% of the time.”

But mostly, people were angry that “RINOs” — Republicans in name only, a pejorative term for Republicans deemed insufficiently conservative or loyal to Trump — were attempting to give credit to antifa for something they were proud to have done.

“WE TOOK THE FUCKING CAPITOL WITHOUT A SHOT. And very minor damage was sustained in the process. NO APOLOGIES. WE’LL FUCKING DO IT AGAIN,” reads one comment on a popular post on TheDonald. One very popular commenter told his fellow agitators to “own it” and stop getting “cold feet” about what they had done and blaming it on antifa:

“They deserve every broken window they got. And I laughed at the photos of them cowering in fear under their chairs. The government should fear the people, never the other way around. I support every action of every patriot against this illegal occupation. We need to support every move our side makes.”

But some are less forgiving of what they view as betrayal from their commander-in-chief.

There’s real anger and betrayal being levied at the president from some people. Many have expressed confusion as to why Trump told them to come to DC, if not to act. One popular comment on TheDonald read: “To be honest, I feel betrayed by GEOTUS who asked us to be there, that’d he’d have ‘new evidence’ to prove what really happened. Except he didn’t release one damned thing. Makes me wonder about a lot of things at this point…”

In reply, another commenter writes: “I’m confused about what the purpose of telling people to come to DC if was just for the same canned speech, no new info … thousands of pissed off people who feel the election was stolen what did anyone expect would happen?”

After Trump released his concession video, some grew angry at the president referring to the events as a “heinous attack” and not standing by them after, in their view, they were just doing what he asked.

Kelsey Piper/Vox
A now-deleted screenshot from the right-wing message board TheDonald from January 7.

But these are not the norm — a very popular post on TheDonald two days after the riots simply read “I remain 100% in support of Donald J. Trump, last legally elected President of the United States and 100% in support of MAGA.” On Facebook, under a Newsmax article headlined “Trump Spokeswoman Says President Emphatically Condemns Riot at Capitol,” all of the top comments were in support of White House press secretary Kayleigh McEnany and loyal to Trump.

Trump is the unifying figure for a lot of this diverse group of people — it’s unlikely that they’ll turn on him en masse, and there are some indications that even though the president has conceded, his followers still intend to fight to stop President-elect Joe Biden from being sworn in.

It’s only going to get worse from here

On Parler, one account — in a message that has made its way through screenshots to Twitter and Instagram — wrote that “many of us will return on January 19, 2021, carrying our weapons … We will come in numbers that no standing army or police agency can match.”

This is just one of several posts in which individuals are planning and strategizing for future anti-government actions. But the sheer volume and diversity of these messages makes it difficult to discern which are direct threats. 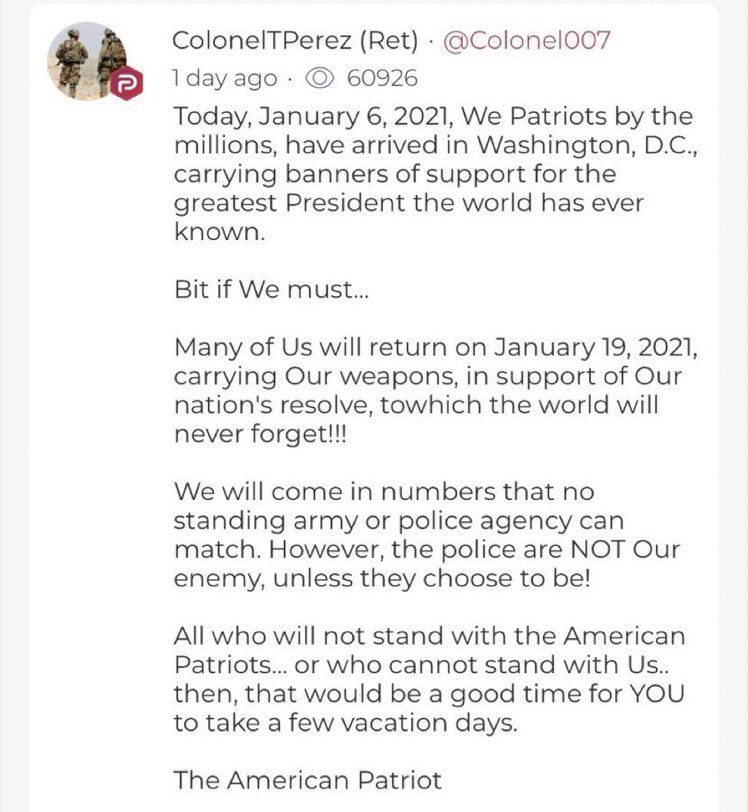 Many of these posters could be minors or pranksters trolling online, with no intent or means of traveling to foment an armed insurrection. But that’s exactly what makes this movement so dangerous.

“One of the challenges is that there’s so much chatter, there’s so much noise, what constitutes a genuine threat [is difficult to parse] — in my view, this is exactly their strategy,” Georgetown University’s Bruce Hoffman, a professor specializing in terrorism studies, told Vox. This ecosystem consists, he said, of “endless feedback loops of calls to violence… where the people posting it may not pose any kind of direct threat but they’re hoping that someone sitting in their basement … is going to read that, get angry enough, feel that there’s community support for the violence and then go out and do something.”

Both Hoffman and Stern pointed to the internet and social media as being a necessary component to the right-wing movement growing nationally. Previously, these extremist groups were discrete entities that had to be searched out. Now, they are adjacent to and intermingled with mainstream political ideas and leaders, and people can exist as a part of the movement without formally identifying as a member of an extremist group.

All it takes is an internet connection and a vague belief that the election was stolen, and all of a sudden people are a part of Facebook groups where posts allege gross fraud and illegal activity undermining democracy. Many people may not even know that the same talking points they post on their social media accounts originated from white supremacists in shady corners of the internet.

Social media and tech companies have scrambled in the past few days to act, as pressure mounts. Apple threatened to remove Parler from its App Store, and Google Play did remove the app shortly thereafter. Twitter has removed Trump entirely from their platform, even going so far as to ban other accounts that he attempted to use following his ban.

While the effort to remove extremism from mainstream social media companies could help curb the spread of extreme ideas to casual users of the internet, the ever-evolving web of right-wing social media and messaging boards will likely defy the control of these tech giants. Just take a look at TheDonald, formerly a part of Reddit; once banned there, it managed to migrate to its own outpost on the internet.

“This was always the dream of white supremacists who first began organizing on a nationwide coordinated basis in the early 1980s … to bring together the disparate strands of the extremist movement: anti-federalists, people opposed to taxes, people opposed to governance above the local level, racists, anti-Semites, xenophobes. Lacking the communicative power of social media they can only go so far,” Hoffman explained.

Well, they have it now.

Source: The online far right is angry, exultant, and ready for more