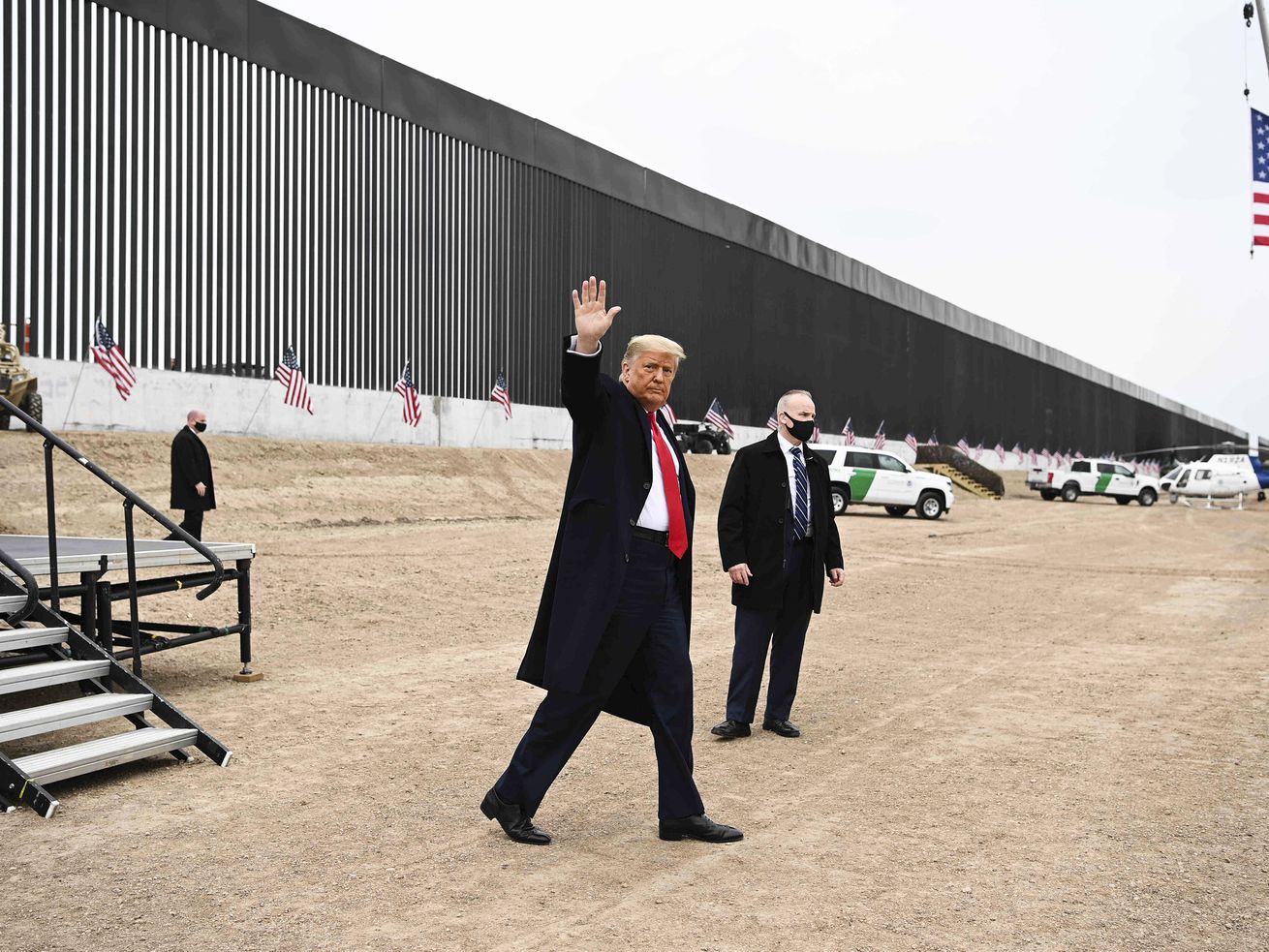 The president made one last stand on immigration in Alamo.

In his first public appearance since his speech that incited last week’s violent insurrection at the US Capitol building, President Donald Trump returned to a theme that he often invokes in times of political strife: immigration.

Trump visited the city of Alamo in Texas’s Rio Grande Valley on Tuesday to showcase the completion of 450 miles of the border wall, which was central to his 2016 campaign. It was a last-ditch effort to salvage his legacy and distract from impending impeachment proceedings just days before his term ends.

Largely ignoring the crises surrounding him, he spoke about the many policies he has pursued to fundamentally reshape the immigration system in an appeal to his base.

“When I took office, we inherited a broken, dysfunctional and open border,” he said. “We reformed our immigration system and achieved the most secure southern border in US history.”

Trump has limited how many asylum seekers can be processed at the border daily and forced thousands of migrants to wait in Mexico for a chance to have their day in court in the US under the “Remain in Mexico” policy, officially known as the Migrant Protection Protocols (MPP).

He has brokered agreements with Central American countries that have allowed the US to send asylum seekers back to those countries and enacted secretive programs that allow immigration officials to rapidly process and deport asylum seekers.

He has issued rules preventing drastically narrowing the circumstances under which people are eligible for asylum. And he has invoked the pandemic as a means of expelling tens of thousands of migrants, including unaccompanied children.

But Trump also appeared aware of the impermanence of those policies once President-elect Joe Biden takes office.

“We can’t let the next administration even think about taking it down,” he said of the wall.

The border has been a focal point of Trump’s presidency

Trump began his presidential campaign in 2015 with a speech declaring that Mexican immigrants were “bringing drugs, they’re bringing crime, they’re rapists,” setting the tone for his agenda of restricting immigration while in office. On his final visit to the border as president Tuesday, he returned to the same imagery, stoking fear about violent criminals coming over the border and the formation of a new “caravan” of migrants.

“Donald Trump started his campaign with hate-filled rhetoric about Mexicans and his time in power will end as he highlights the most divisive symbol of his presidency, a wall that tears apart our border communities,” Texas Democratic Party chair Gilberto Hinojosa said in a statement. “In a week where we’ve seen the dangers of Trumpism and Trump’s incendiary rhetoric, Donald Trump is going back to his most dangerous and hate-filled play book.”

The wall is a physical reminder of Trump’s efforts to keep out asylum seekers and other vulnerable migrants, featuring a plaque with his signature.

But despite what he promised in 2016, he didn’t build 1,000 miles of border wall and Mexico never paid for it; instead, the more than $15 billion burden fell on taxpayers and was partially transferred from the Pentagon’s budget without congressional approval. And he was only able to construct it by waiving environmental and contracting laws and seizing private land.

Biden has promised to halt wall construction once he assumes office, though that might be easier said than done. It’s unclear whether he could terminate existing construction contracts and what will be done with the unspent funds that were transferred from the Pentagon for the purposes of building the wall.

But despite Biden’s vow that “there will not be another foot of wall constructed on my administration,” the new president’s team will likely be tasked with maintaining Trump’s wall plan. And the hundreds of miles of fencing that has already been constructed will serve as a physical testament to Trump’s immigration policy.

Source: Trump’s border visit was a desperate attempt to preserve his legacy on immigration