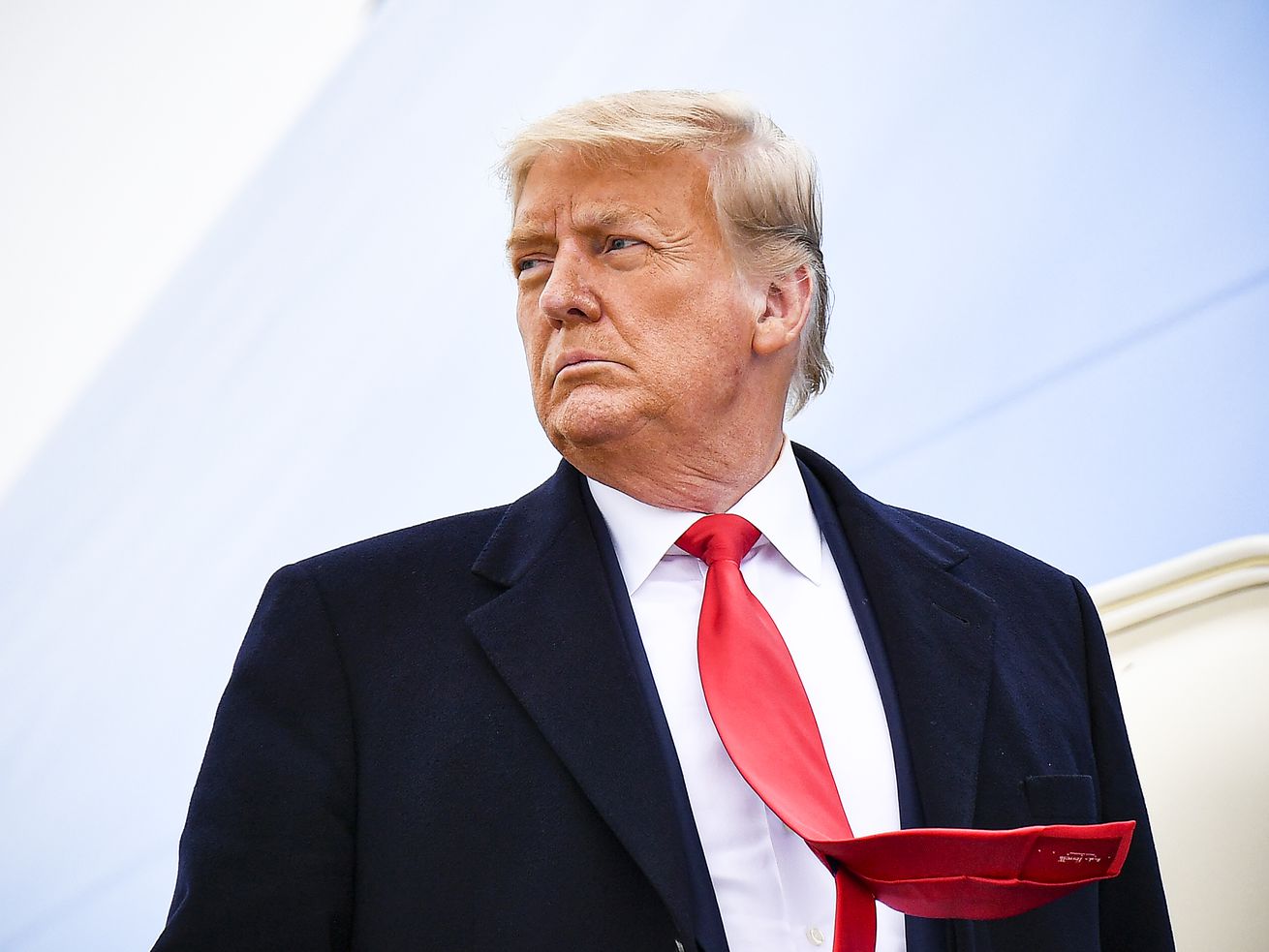 In a bipartisan vote, the House has impeached Trump for the second time.

The US House of Representatives has officially impeached President Donald Trump, making him the first president in history to be impeached twice.

On Wednesday, the House voted to approve one article of impeachment on a vote of 232-197, charging the president with “incitement of insurrection” for his role in riling up a large crowd of Trump supporters who launched an attack on the Capitol last week as lawmakers worked to certify the results of the 2020 election.

Unlike Democrats’ first impeachment of Trump in 2019, this vote proved to be bipartisan — with 10 House Republicans, including No. 3 ranking House Republican Rep. Liz Cheney, voting with Democrats to impeach Trump. Democrats have been laser-focused on getting Trump out of office as soon as possible; the House voted Tuesday night to urge Vice President Mike Pence to remove Trump using the 25th Amendment. 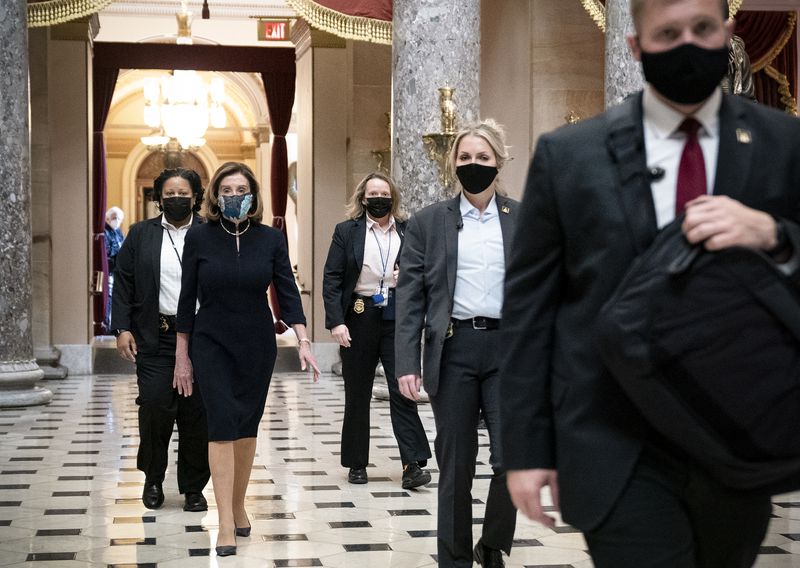 Stefani Reynolds/Getty Images
Speaker of the House Nancy Pelosi is surrounded by a security detail as she walks from her office to the House floor on January 13.

House Speaker Nancy Pelosi intended to give Pence about 24 hours to invoke the 25th Amendment before lawmakers took the step of impeaching Trump, but on Tuesday night, Pence confirmed in a letter that he would not do so. Since Pence didn’t budge, the House went ahead with its action.

“We know that the president of the United States incited this insurrection, this armed rebellion against our common country,” Pelosi said during a Tuesday speech on the House floor. “He must go, he is a clear and present danger to the nation that we all love.”

In contrast to a 2019 impeachment that took many months and went through multiple committee hearings, the speed with which this one took place is notable. The violence that left several people dead — including one Capitol Police officer killed by protesters and another who later died by suicide — has deeply shaken both Congress and the citizens of Washington, DC. And the severity of the attack, and the antidemocratic sentiment it represents, ultimately led Democrats and some Republicans to argue that it required Trump’s immediate removal.

“In 2019, we were facing a president that was slowly eroding our democratic norms,” Rep. Mikie Sherrill (D-NJ) told Vox last week. “In this case, we see this in real time. This isn’t him slowly moving toward an unforgivable event; this is a president who encouraged violence against the House of Representatives as it was trying to certify an election.”

The vote came a week after the insurrection, in a now heavily fortified Capitol scarred by the deadly violence of January 6. Hundreds of National Guard troops stood stationed outside the building, and many more patrolled the inside, some of them resting between shifts on the Capitol’s marble floors. 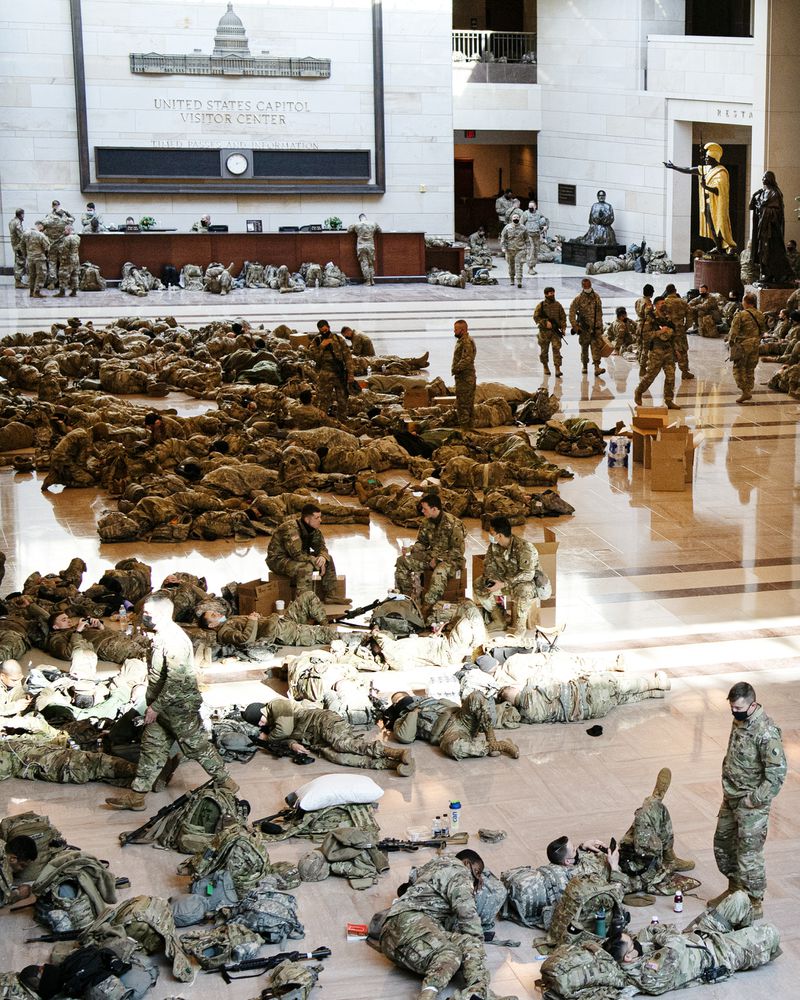 Caroline Brehman/CQ-Roll Call/Getty Images
Members of the National Guard rest near the Capitol Visitor Center as the House of Representatives votes on the impeachment of President Trump. 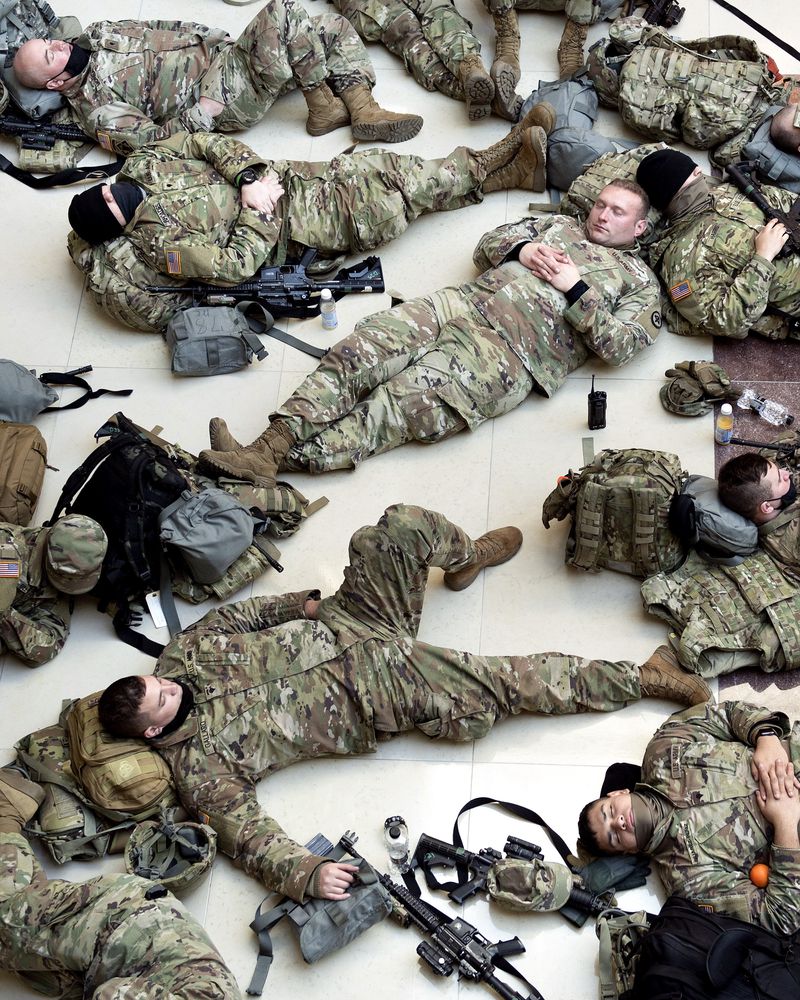 With just a week to go until President-elect Joe Biden’s inauguration, some Democrats are nervous that a Senate impeachment trial could hamper Biden’s efforts to confirm his cabinet and pass key early legislation. But others are hoping Democrats can juggle multiple things at once.

“As the Senate is going through a trial, the House can and should still be working on legislation in the first 100 days of the Biden/Harris administration,” first-term Rep. Mondaire Jones (D-NY) told Vox. “I am also confident [incoming Senate Majority Leader] Chuck Schumer will be able to schedule the Senate trial and confirmation hearings in such a way as to not conflict with each other.”

In a stark reversal from 2019, when zero GOP lawmakers voted to impeach, some House Republicans joined Democrats to impeach Trump on Wednesday.

These Republican votes to impeach reflect a deep division among Republican lawmakers — following January 6’s deadly insurrection by Trump supporters, the GOP caucus has debated whether to support Trump or rebuke him.

After backing him for the last four years, some Republicans fell on the side of rebuking the president, believing his role in stoking the violent mob was too grave to ignore. Others were said to privately support impeachment, while being too afraid to do so publicly.

“Several” Republicans feared for their safety if they supported impeachment, Rep. David Cicilline (D-RI), one of the co-authors of the impeachment article, told reporters on Wednesday, hours before the vote.

“Their own personal safety from harm, and their family,” Cicilline told reporters. “That’s real.” 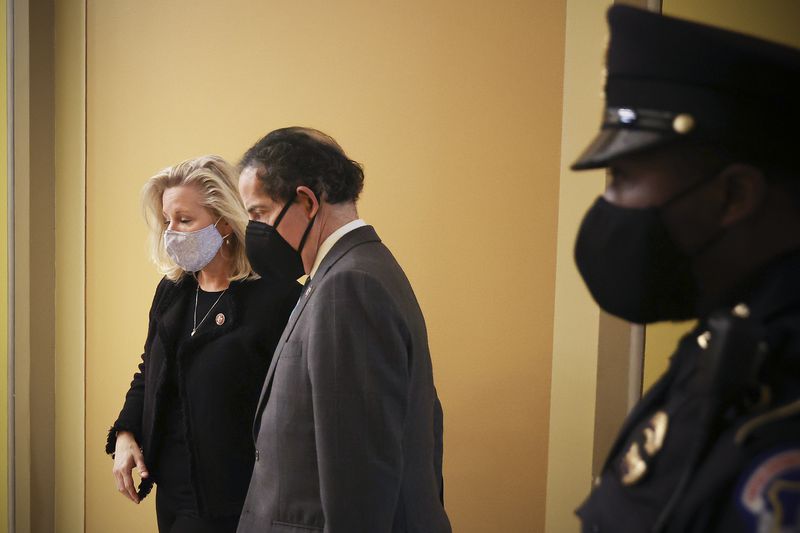 Cheney was joined by multiple Republicans including Reps. John Katko (NY), Adam Kinzinger (IL), Jaime Herrera Beutler (WA), Fred Upton (MI), and Dan Newhouse (WA). However, her high rank in the House Republican conference meant she soon became the focus of backlash from House conservatives, some of whom said they wanted to oust Cheney from her House leadership role in response. And amid this pushback came further division, over the question of whether it was proper to chastise Cheney over her vote.

“That is her right to take a position on this issue … we should not be silencing voices of dissent,” first-term Rep. Nancy Mace (R-SC) told Vox. “That is a fundamental right in the United States. That is one of the reasons we’re in this today is we’ve allowed QAnon conspiracy theorists to lead the objections last Wednesday and we heard from them last night on the floor of the House, and it’s wrong.”

Mace clarified to reporters that she still planned not to support impeachment, saying she believe the process was too rushed. House Minority Leader Kevin McCarthy (R-CA) gave a similar reason for voting against impeachment, saying it would further divide a deeply divided country. McCarthy issued a rebuke of Trump’s actions in his speech, if not his actions.

“The President bears responsibility for Wednesday’s attack on Congress by mob rioters,” McCarthy said. “He should have immediately denounced the mob when he saw what was unfolding.”

Katko, who was the first House Republican to say he’d vote to impeach the president, also placed the responsibility for the insurrection squarely on Trump in a statement Tuesday night.

“To allow the president of the United States to incite this attack without consequence is a direct threat to the future of our democracy,” Katko said in a statement first reported by Syracuse.com. “For that reason, I cannot sit by without taking action. I will vote to impeach this president.”

The defections from a party that has remained steadfastly loyal to Trump over the last four years are notable, and could signify a deeper split within the House Republican conference. But it remains to be seen whether there will be a similar break coming from Senate Republicans.

Conviction in the Senate will hinge on Republicans

At this point, there do not appear to be enough votes in the Senate to convict Trump in an impeachment trial: Sixty-seven votes, or two-thirds of the chamber, would be needed to make this happen.

That math means 17 Republicans would have to join with the 50-person Democratic caucus on a conviction vote, once newly elected Jon Ossoff and Raphael Warnock of Georgia are seated. While Senate Majority Leader Mitch McConnell is reportedly “pleased” Democrats are impeaching Trump, according to the New York Times, no Senate Republicans have announced that they’ll vote to convict the president yet. McConnell also recently told colleagues he has yet to make a final decision.

Sans sufficient GOP support for conviction, Trump would be acquitted much like he was during the previous impeachment process last year. In the first impeachment trial, Sen. Mitt Romney of Utah was the only Senate Republican to vote in favor of conviction.

Whether or not more Republicans are willing to do so this time around could have major implications for Trump’s political future — and that of other Republicans with presidential aspirations. 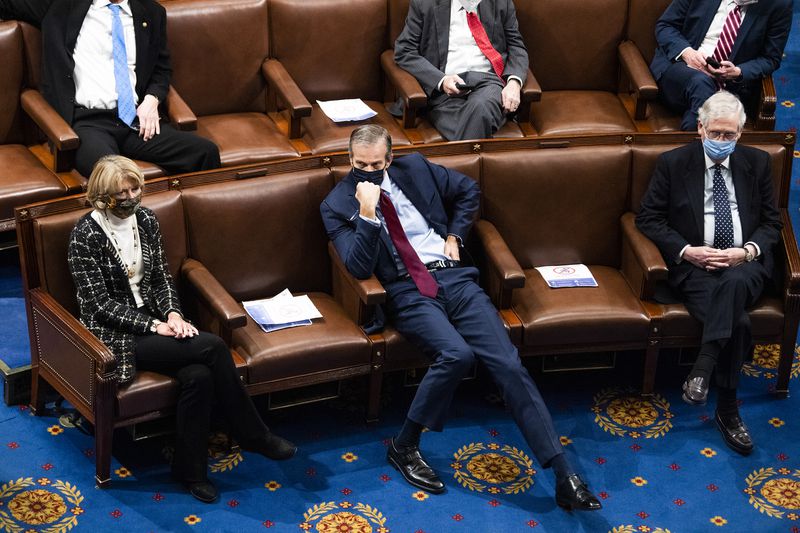 If the Senate convicts Trump, lawmakers will have the opportunity to vote on barring him from holding the presidency in the future. A successful vote would interrupt any plan Trump might have to run again in 2024, and clear a path for figures like Sens. Ted Cruz and Josh Hawley, two senators who voted not to certify the 2020 Electoral College results and have presidential ambitions of their own.

Thus far, Republicans have stopped short of backing a conviction, however. Sens. Lisa Murkowski (R-AK) and Pat Toomey (R-PA) have called for Trump’s resignation, while Sen. Ben Sasse (R-NE) has said he’ll consider the article of impeachment when the House sends it over.

It is now also looking increasingly likely that an impeachment trial won’t happen until after Biden is inaugurated, meaning that it will be overseen by incoming Democratic Senate Majority Leader Chuck Schumer. Senate Democrats hoped McConnell would agree to reconvene the Senate early to take up a trial, but McConnell poured cold water on that notion Wednesday, according to the Washington Post’s Seung Min Kim.

This could complicate the need for lawmakers to address key legislative agenda items and Cabinet nominations. The upper chamber could well take an approach that Biden floated earlier this week, splitting its time between legislation and nominations earlier in the day, and conducting the impeachment trial in the afternoon. But that is far from certain.

“We’re going to have to do several things at once but we got to move the agenda as well,” Schumer said in a recent interview with the Buffalo News. “Yes, we’ve got to do both.”

Source: The House just made Trump the first president to be impeached twice