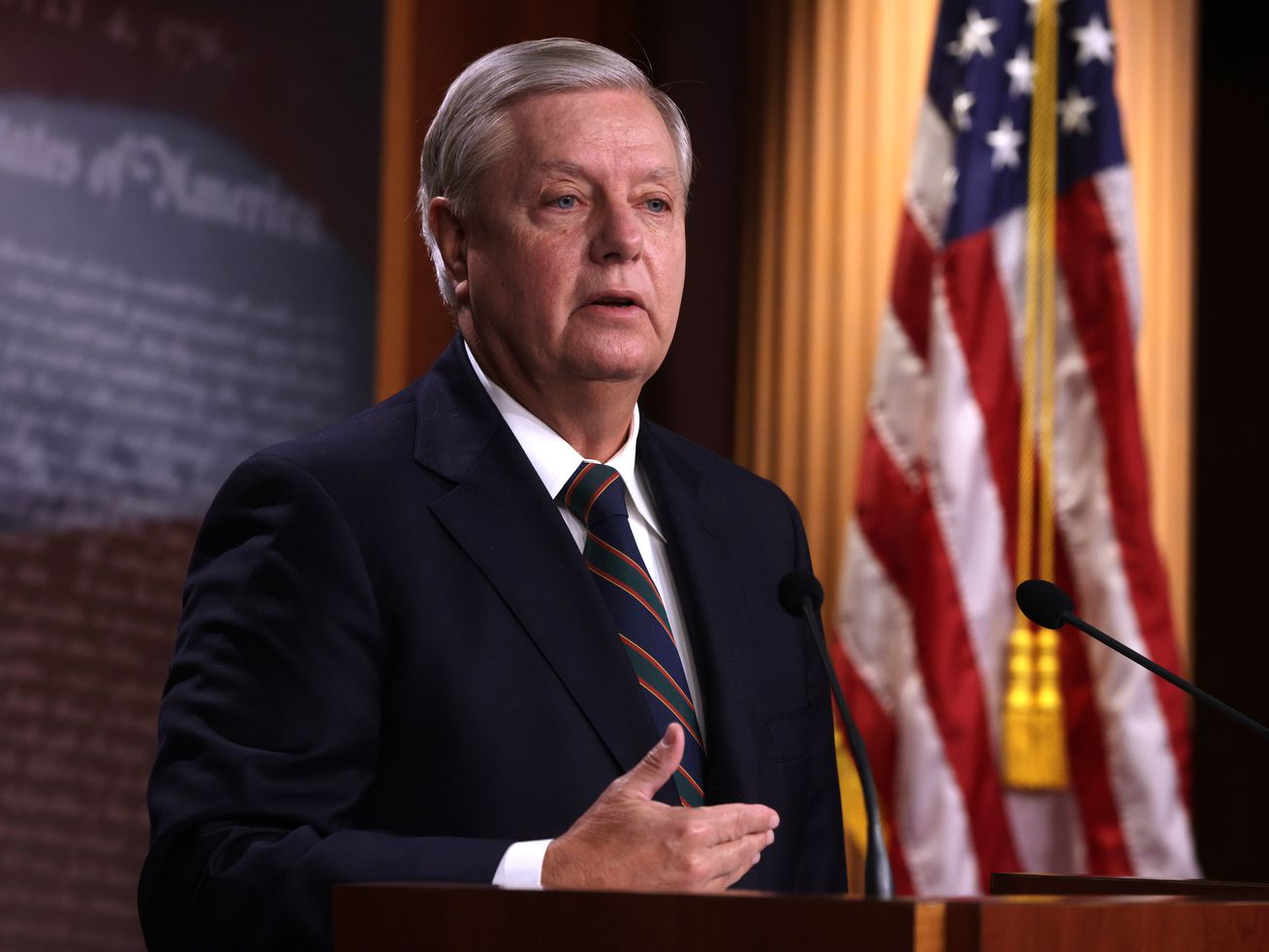 Sen. Lindsey Graham (R-SC) speaks during a news conference at the US Capitol on January 7. | Alex Wong/Getty Images

Graham is questioning the legitimacy of a trial after Trump leaves office. But Dems and some scholars disagree.

Sen. Lindsey Graham (R-SC) released a letter on Sunday calling on Senate Minority Leader Chuck Schumer — soon to be the majority leader — to dismiss the House’s article of impeachment against President Donald Trump, calling the effort an “unconstitutional” act of “vengeance” which will hinder the process of “national healing.”

Graham’s letter represents the latest effort by Republicans to question the legality and the ethics of Democrats’ plan to hold a Senate impeachment trial for Trump after he leaves office. But Democrats argue that holding Trump accountable for his role in inciting the storming of the US Capitol — and potentially barring him from holding office again — is a critical component of restoring democratic norms and stability in America.

In his letter Graham calls on Schumer to hold a vote to dismiss the article of impeachment from the House, which is expected “soon,” according to Rep. Jamie Raskin (D-MD), the lead House impeachment manager.

Graham argues that the Senate already fulfilled its duty to defend the election when “virtually all of us” rejected Trump’s calls to overturn the 2020 election results during Congress’s certification of Biden’s victory, and that impeachment will fuel further division. (Seven Republican senators, along with some 138 members of the House, voted against certifying the election results.)

“But now, in your first act as majority leader, rather than begin the national healing that the country so desperately yearns for, you seek vengeance and political retaliation instead,” Graham wrote in his letter. “While the vice president and Senate Republicans rejected unconstitutional actions, you seek to force upon the Senate, what would itself be but one more unconstitutional action in this disgraceful saga — the impeachment trial of a former president.”

Graham also contested the right of Democrats to vote to permanently disqualify Trump from holding office again with Trump out of office during the Senate impeachment trial.

Sen. Tom Cotton (R-AR) has also questioned whether or not Trump can be tried in the Senate after he’s stepped down from office. “The Founders designed the impeachment process as a way to remove officeholders from public office — not an inquest against private citizens,” he said in a statement Wednesday. “The Constitution presupposes an office from which an impeached officeholder can be removed.”

But many experts say the Constitution doesn’t offer clear guidance on this issue, and leaves open the possibility of impeachment and trial for government officials even after they’ve left office.

There are historical examples of officials being tried after leaving office

Democrats have cited former examples of officials, such as judges, being tried even after leaving office. According to the Wall Street Journal, the US Constitution is silent on the issue, but a report from the Congressional Research Service — Congress’s internal research organization — found that “while the matter is open to debate, the weight of scholarly authority agrees that former officials may be impeached and tried.”

The CRS report cited the example of Secretary of War William Belknap, who was impeached by the House and tried in the Senate in 1876, though he had already resigned after evidence emerged that he had acted corruptly.

Laurence Tribe, a legal scholar at Harvard Law School, wrote recently in the Washington Post that “the clear weight of history, original understanding and congressional practice bolsters the case for concluding that the end of Donald Trump’s presidency would not end his Senate trial.”

Tribe wrote that the Constitution’s references to impeachment do not limit impeachment power based on whether an official is holding office. “Nothing in the Constitution suggests that a president who has shown himself to be a deadly threat to our survival as a constitutional republic should be able to run out the clock on our ability to condemn his conduct and to ensure that it can never recur,” he wrote.

But there isn’t a consensus on this view. Former federal appeals court judge J. Michael Luttig has argued that the Senate trial would be unconstitutional, and says that he believes only the Supreme Court can make a definitive judgment on the matter.

It’s not yet clear exactly when the House will send the article of impeachment to the Senate, but when it does, that will immediately trigger a trial. Convicting an official who is impeached requires a two-thirds majority vote in the Senate.

As Vox’s Ian Millhiser explains, if that happens, then there can be a vote held on the sanction — which includes disqualifying Trump from holding office again:

If the impeached official is convicted, the Senate then must decide what sanction to impose upon that official. Under the Constitution, “judgment in cases of impeachment shall not extend further than to removal from office, and disqualification to hold and enjoy any office of honor, trust or profit under the United States.” So the Senate effectively must decide whether merely removing the official from office is an appropriate sanction, or whether permanent disqualification is warranted.

It’s unclear how many Senate Republicans would join Democrats in voting either for conviction or for barring Trump from holding office again. But rising tensions between Trump and the GOP establishment have reportedly prompted Senate Majority Leader Mitch McConnell — soon to be minority leader — to consider moving against Trump and convicting him as a way of reducing his influence over the party.