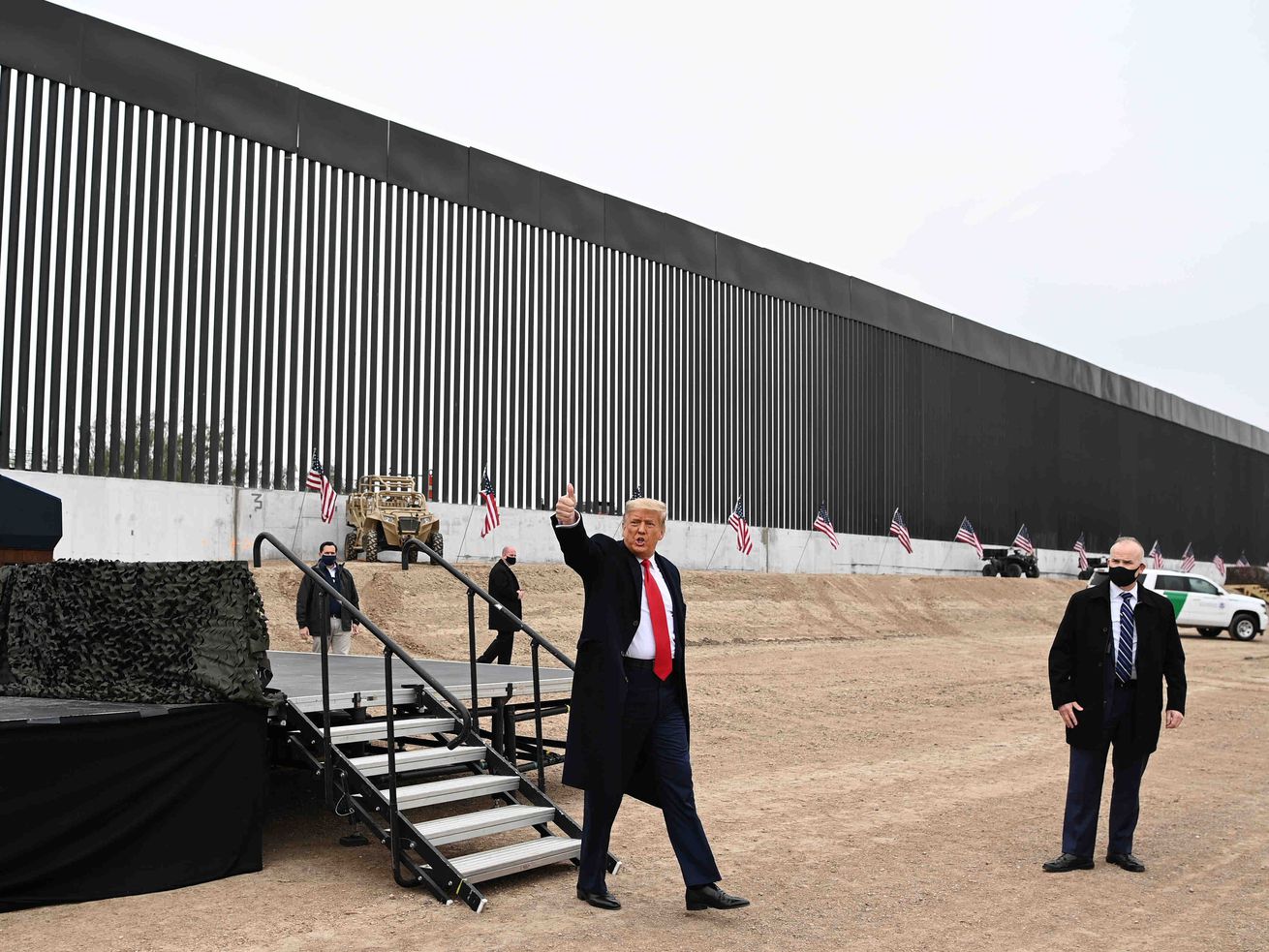 Trump is reportedly planning to make more than 100 pardons before leaving office.

In his final 48 hours in office, President Donald Trump reportedly plans to pardon more than 100 people. Though he has previously floated the idea of doing so, it is unclear whether he will attempt to include himself among those receiving clemency.

According to CNN, Trump held a meeting on Sunday with top aides — including his daughter Ivanka Trump and her husband, Jared Kushner — to review candidates for his final pardons. The Washington Post has reported that he will announce pardons and prison sentence commutations on either Monday or Tuesday.

It is an open question whether two close associates, Stephen Bannon and Rudy Giuliani, would be on the list, which is reportedly populated with more traditional pardon candidates, as well as some high-profile figures.

Bannon, who was an adviser to Trump’s 2016 campaign, was charged last year with defrauding donors who contributed to an effort to privately fund new sections of the US-Mexico border wall. Giuliani has served as Trump’s personal attorney for years, and helped lead the Trump campaign’s unsuccessful attempts to overturn the November election results in courts. Unlike Bannon, Giuliani has not been charged with any crimes, but his financial dealings with Ukrainian business associates are under investigation.

Any pardon for Giuliani, then, would be preemptive — and according to the Washington Post, Trump is also considering preemptively pardoning members of his family.

Trump has reportedly been looking into pardoning his family members and Giuliani for weeks. According to the New York Times, the president has expressed concern that the incoming Biden administration will target the Trump family. The family also faces investigation in New York, although a presidential pardon would not affect state or local criminal investigations or charges.

In general, it is not unusual for a president to grant clemency to criminal offenders as part of his or her final days in office. President Barack Obama granted 330 prison sentence commutations to nonviolent drug offenders on January 19, 2017, his final full day in office. That set a one-day record. Overall, Obama granted clemency to 1,715 incarcerated people across his eight years, using a unique executive authority.

Trump has used that same power 94 times, including pardoning 49 people the week before Christmas 2020. But many of those pardons have been of allies, or those with connections to his family. For instance, he pardoned his disgraced former national security adviser Michael Flynn, who was accused of lying to the FBI as it investigated Trump, shortly before Thanksgiving.

Former campaign chair Paul Manafort and Roger Stone, a longtime friend and ally, were among those who received Christmas pardons, as was Charles Kushner, Ivanka’s father-in-law, who was convicted in 2005 of tax evasion, witness tampering, and lying to the Federal Election Commission.

Also raising concerns is a report from the New York Times, that found Trump advisers and allies have been accepting money to lobby for pardons. As long as Trump himself is not paid to provide a pardon, this is not illegal — but criminal justice advocates have voiced concerns that it may advantage those with resources and connections over lower-income pardon petitioners.

Trump has granted clemency to some less well-known people, albeit often at the urging of high-profile figures, such as Kim Kardashian; she personally appealed to Trump to release Alice Johnson, a woman who was serving a federal drug trafficking sentence.

Trump’s final pardons are expected to contain some figures like Johnson, but also people he is close to. In question, however, is whether he will try to preemptively pardon himself. Trump faces no charges — although he potentially could for his role in stirring up the January 6 insurrection — and no president has ever attempted to pardon himself before.

Whether a president can pardon themselves is a matter of legal debate. But even if Trump can pardon himself, it is not clear he should, as any pardon may be seen by some as an admission of guilt, something that could endanger his chances of acquittal in his coming Senate impeachment trial.

In 2018, during a federal investigation into his first presidential campaign, Trump tweeted that he had the “absolute right” to pardon himself. That is probably not true, many legal experts say.

In a column for the Washington Post, constitutional law expert Dale Carpenter argues that a president cannot self-pardon. In Article II of the Constitution, Carpenter writes, the president’s pardon power does not include “Cases of Impeachment.” This, he argues, is partly tied to the framers’ desire to separate American democracy from a monarchy, which is why they limited executive pardon power.

A self-pardon would also violate laws against acting as one’s own judge, reports NPR’s Nina Totenberg. As Jane Coaston explained for Vox when Trump first declared he could pardon himself:

As my colleague Sean Illing detailed in April, one potential roadblock to a presidential self-pardon could be in the Constitution’s “take care clause” — the president “shall take care that the Laws be faithfully executed” — which some scholars take to mean that the president could not self-pardon, as it’s inherently in his own self-interest.

Fordham law professor Jed Shugerman says, “Clearly, a self-pardon is a breach of fiduciary duty because it’s manifestly self-interested. But if a president managed to do this, the following administration could try to prosecute the president, which would force a court to examine that president’s self-pardon and decide whether or not it was invalid on the grounds that it violated his fiduciary duty to serve the best interests of the people over himself.”

That’s why President Richard Nixon could not pardon himself after his resignation — as Coaston notes, “during the Watergate scandal, the Department of Justice ruled that presidents could not, in fact, self-pardon, as ‘no one may be a judge in his own case.’” (President Gerald Ford later pardoned Nixon in the name of national unity and “tranquility.”)

All that said, Trump and his family also face a rash of potential legal action in New York. New York Attorney General Letitia James filed suit against the Trump Organization in August and is investigating the family’s financial dealings in the state. Manhattan District Attorney Cy Vance’s office has also been investigating the organization and its use of tax write-offs. Trump also faces a class-action lawsuit from former tenants in Trump-owned properties.

None of those local and state actions would be affected by a self-pardon. So even if Trump tries one last unprecedented move on his way out the door, it would not end his or his family’s legal woes.

Source: As Trump prepares for final presidential pardons, will he attempt to pardon himself?