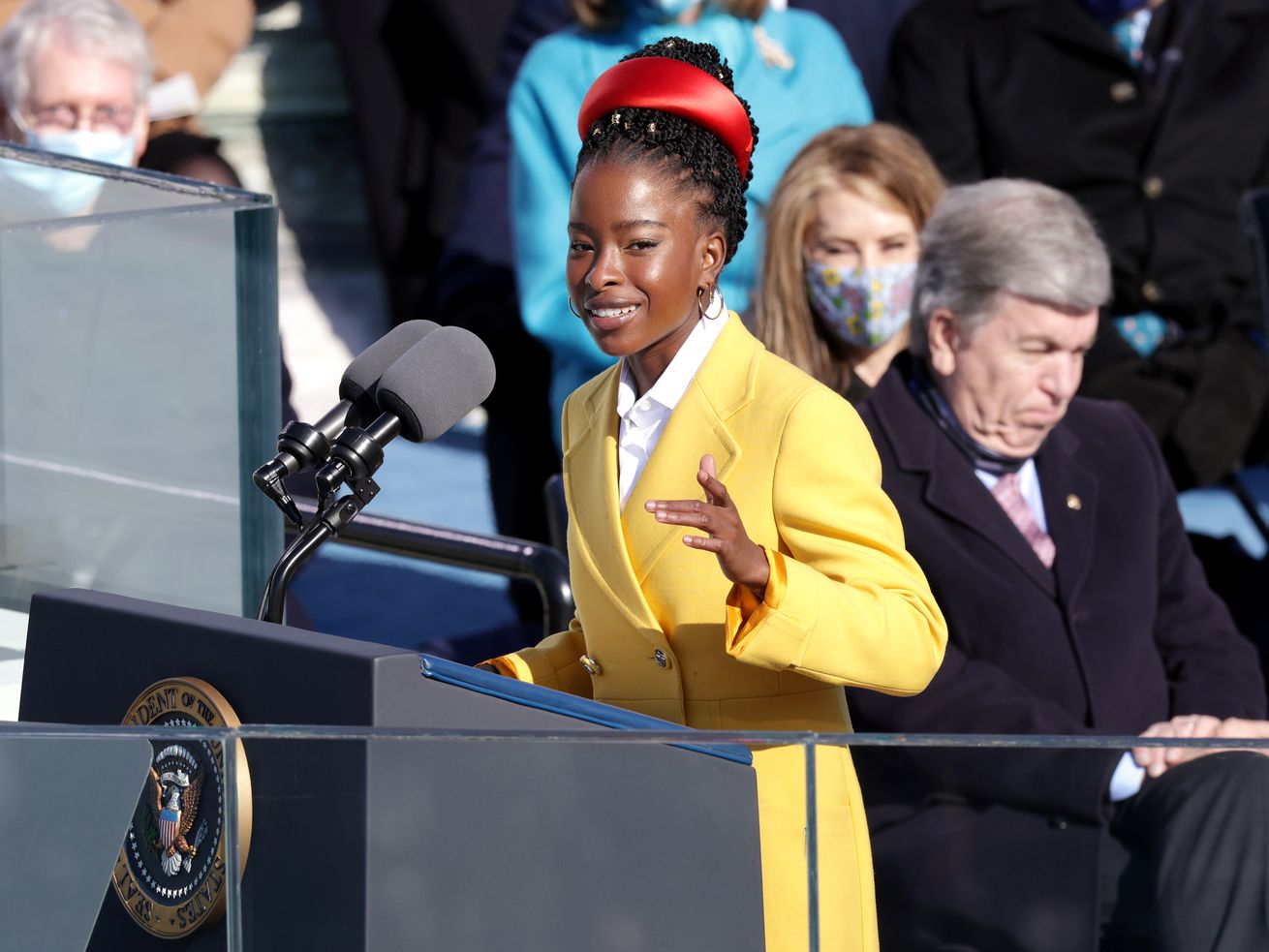 Youth Poet Laureate Amanda Gorman speaks at the inauguration of US President Joe Biden on the West Front of the US Capitol on January 20, 2021, in Washington, DC. | Alex Wong/Getty Images

The 22-year-old, who was the US’s first youth poet laureate, wrote “The Hill We Climb” the night of the Capitol riot.

After Joe Biden finished delivering his inaugural address, the youngest-ever inauguration poet in US history took the stage and stole the show. Amanda Gorman, who is 22 years old and was named the first-ever youth poet laureate of the United States in 2017, delivered her poem “The Hill We Climb” to the waiting crowd. Within minutes, her Twitter account jumped from 48,000 followers to 255,000 and counting.

In an interview with the New York Times, Gorman, who graduated from Harvard last year with a degree in sociology, said she struggled to compose “The Hill We Climb” in the weeks leading up to the inauguration. Then came the Capitol riots of January 6.

Gorman says she stayed up late into the night after the riots, composing a poem that would address the violence of the day while still offering hope for the future. The result, which nods to the Broadway musical Hamilton, reads, in part, as follows:

We’ve seen a force that would shatter our nation rather than share it,Would destroy our country if it meant delaying democracy.And this effort very nearly succeeded.But while democracy can be periodically delayed,It can never be permanently defeated.In this truth, in this faith, we trust.For while we have our eyes on the future,History has its eyes on us.

“We have to confront these realities if we’re going to move forward, so that’s also an important touchstone of the poem,” Gorman told the New York Times. “There is space for grief and horror and hope and unity, and I also hope that there is a breath for joy in the poem, because I do think we have a lot to celebrate at this inauguration.”

Gorman, who was chosen to write a poem for the inauguration after Jill Biden saw a video of her performing at the Library of Congress, has something in common with President Joe Biden. An audio processing disorder left her with a speech impediment at a young age, and she underwent extensive therapy to correct it, as Biden did with his own stutter. In 2018, Gorman told the Harvard Crimson that as a child, strangers who heard her impediment used to assume that she was a British or Nigerian immigrant.

“It kind of became my mini experiment,” she said. “If they thought I was from Europe, they would treat me very well, like I was a sophisticated intellectual; if I let them believe that I was from Nigeria, they’d make comments like, ‘Oh, this is how credit cards work,’ or, ‘You might not know this in the village you come from.’”

“But I don’t look at my disability as a weakness,” Gorman told the LA Times earlier this week. “It’s made me the performer that I am and the storyteller that I strive to be. When you have to teach yourself how to say sounds, when you have to be highly concerned about pronunciation, it gives you a certain awareness of sonics, of the auditory experience.”

Dressed in a yellow Prada coat that she can also be seen modeling in an editorial campaign, Gorman delivered “The Hill We Climb” in a melodic spoken-word cadence, drifting from rhymed verse to free verse and back again. The full poem will be included in her forthcoming poetry book, also entitled The Hill We Climb, set to publish in September.

There’s one more big thing Gorman has in common with Joe Biden. She told the Harvard Crimson in 2018 that she’d like to run for president someday.