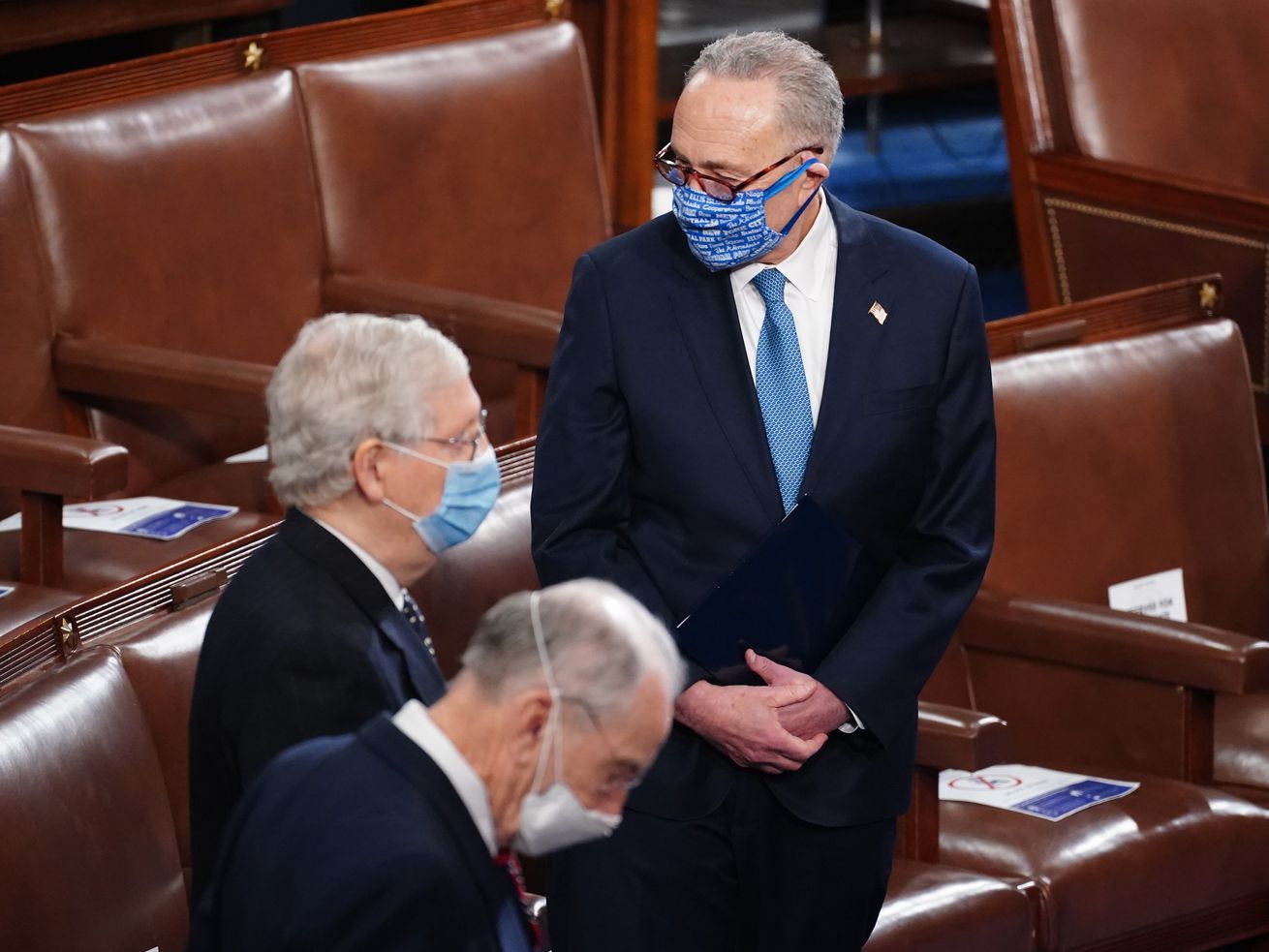 Then-Senate Minority Leader Chuck Schumer (R) stands with then-Senate Majority Leader Mitch McConnell as they attend the Electoral College vote certification for President-elect Joe Biden, during a joint session of Congress at the US Capitol on January 6, 2021, in Washington, DC.  | Kevin Dietsch/Getty Images

A Senate fight over the filibuster foreshadows Republican obstruction.

The Senate is now split 50-50 between Democrats and Republicans — and an early argument over its rules could indicate just how much the GOP intends to obstruct other legislative priorities.

Because Democrats control the White House, they have the majority in an evenly divided Senate, with Vice President Kamala Harris poised to serve as a tiebreaker. To officially determine how the Senate will function when it comes to things like committee memberships, lawmakers need to approve what’s known as an organizing resolution that lays out these rules. (Without it, Republicans still confusingly head the committees and the distribution of funding; even office space isn’t yet clear.)

But the divided chamber can’t even agree on that. Senate Majority Leader Chuck Schumer and Minority Leader Mitch McConnell are negotiating this resolution, though they’ve reached a bit of a sticking point. Schumer has said he’d like to model this measure off a power-sharing agreement made between Sens. Tom Daschle and Trent Lott in 2001, during the last 50-50 Senate. McConnell, meanwhile, wants to add a caveat: He’d like Democrats to commit to keeping the legislative filibuster around.

Schumer, and many members of the Democratic caucus, has blanched at this idea since it would severely limit the options the party has in the face of potential Republican pushback to bills, and reduce their leverage. Even if Democrats don’t vote to get rid of the filibuster, for example, the threat that they could may make Republicans more open to compromise and negotiations on policies like Covid-19 relief.

The filibuster itself is something that gives Republicans more sway over the organizing resolution since the measure can also be filibustered.

This disagreement is already affecting some aspects of the Senate’s functionality: Republicans are still running the confirmation hearings for Biden’s nominees and, as a Time report suggested, are less inclined to expedite such proceedings. Plus, senators’ committee assignments have yet to be finalized even as the legislative body stares down a busy term.

Republicans’ argument over the rules could signal the approach they’ll take in the minority — where they could use their numbers to block or significantly pare down upcoming bills.

Schumer, thus far, has said he hopes to approve an organizing resolution that’s very similar to the one that Daschle and Lott arrived at in 2001.

“We have offered to abide by the same agreement the last time there was a 50-50 Senate. What’s fair is fair,” Schumer said in a floor speech.

Because Democrats have the majority with Vice President Harris’s vote, they’ll hold the chair positions of every committee, but the resolution would split committee membership evenly, as well as office space and funding. Any measure that receives a tie vote in committee would also be able to receive some consideration for advancement on the floor.

As majority leader, Schumer will still control the floor schedule for legislation, and when to proceed to votes. “As for controlling the agenda, the Democrats will ensure they have standard majority party power, because in essence, they do,” Josh Ryan, a Utah State University political scientist, told PolitiFact.

Schumer has pointed to using the 2001 agreement as a model, because it set a precedent for how the two parties could operate in this unique circumstance.

McConnell, however, also wants a commitment not to eliminate the legislative filibuster — which Democrats have balked at. “We need to have the kind of position of strength that will enable us to get stuff done,” Sen. Richard Blumenthal (D-CT) told Politico.

Democrats have pressed Schumer to stand firm on these rules negotiations, which underscore one of the party’s first shows of strength in the majority. They’ve pointed to the 2001 precedent, and said it should remain unchanged. As Slate’s Jim Newell noted, McConnell’s motivations for pressing this issue are also unclear — since the resolution is not ultimately enforceable if Schumer later decides he wants to blow up the filibuster anyway.

The 2001 example is the most recent time that the Senate has had this type of split: It’s only happened two other times in history, in 1881 and 1954.

If Republican outcry about the Senate organizing resolution is any indication, the 50-50 breakdown could mean more roadblocks on everything from contentious Cabinet nominees to other legislative priorities, so much so that Democrats look to procedural options that get around these impasses.

Democrats’ first option is to negotiate with Republicans on key bills including Covid-19 relief as well as immigration reform, with the hopes of picking up 10 lawmakers who would help hit the 60-vote threshold needed to advance these policies. At the same time, they face the challenge of keeping every member of their caucus in line, including moderates who may be more likely to peel off.

“You’ve got to keep your caucus together — Joe Manchin is the wildcard here, too. Kyrsten Sinema as well. The centrists are going to have a lot of power: Manchin, Sinema, Murkowski, Collins,” says Cook Political Report’s Jessica Taylor.

Growing GOP opposition toward Biden’s $1.9 trillion Covid-19 recovery package indicates that Republicans may be gearing up to obstruct or limit his proposals, a scenario that could push Democrats to leverage a process known as budget reconciliation.

As part of budget reconciliation, lawmakers are able to advance spending and tax-related measures with a simple majority of votes, enabling Democrats to potentially pass some aspects of Covid-19 relief like direct payments and paid sick leave, without Republican backing. The degree of Republican opposition they face will likely be a factor in determining whether they ultimately take this route.

“I think it’s likely, if not almost a certainty, that reconciliation will be a tool,” former Sen. Tom Daschle told Vox.

Depending on how severe Republicans’ blockade continues to be, eliminating the legislative filibuster might well be considered, too — though there’s currently disagreement within the Democratic caucus about whether to weigh that possibility. As Sen. Ron Wyden (D-OR) previously told Vox, “The dynamic to watch is whether Mitch McConnell does to a Biden presidency what he did to an Obama presidency.”

Source: The 50-50 Senate is already running into trouble figuring out its rules