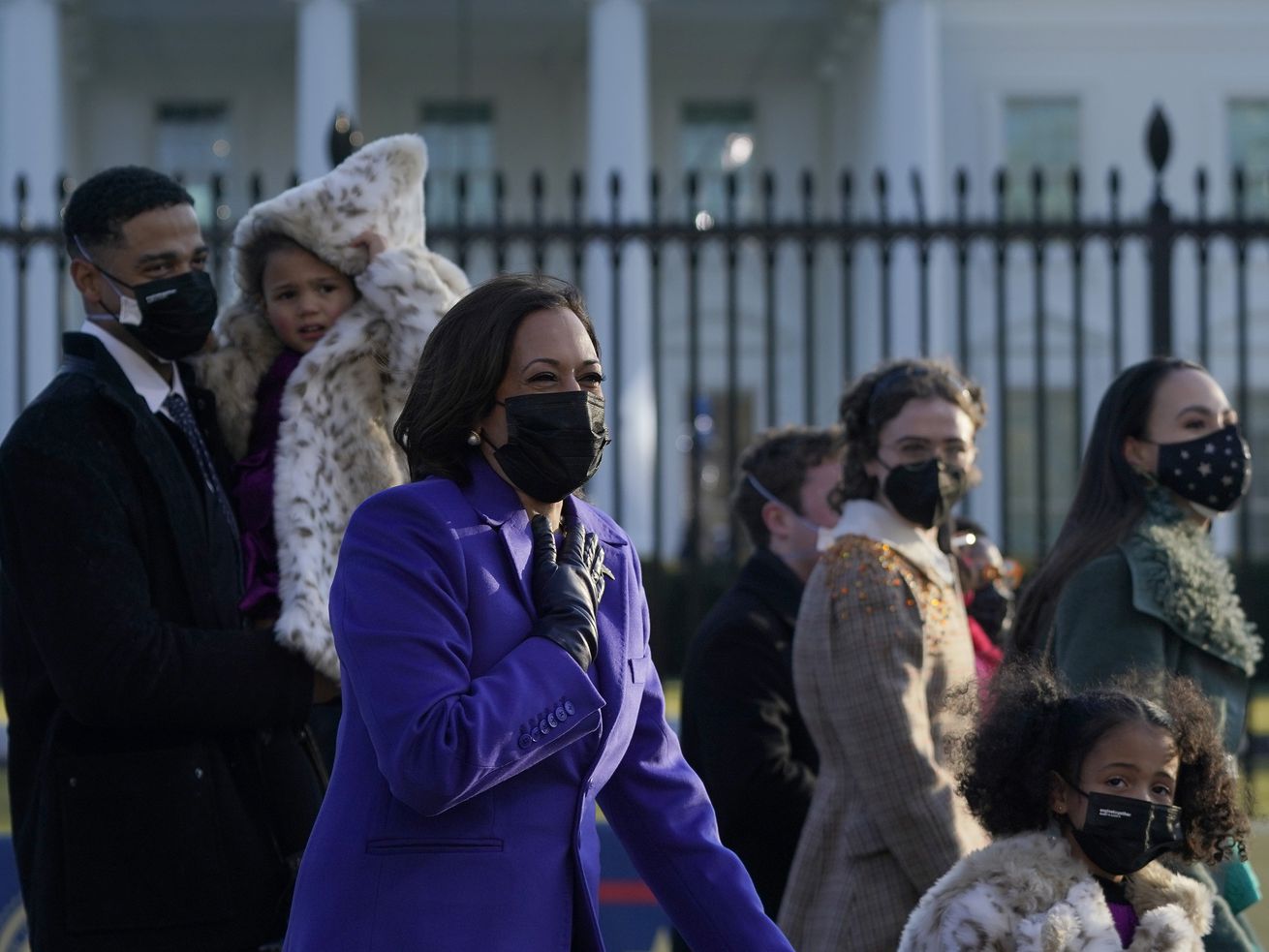 “Momala,” and what Kamala Harris’s blended family means to people like me who have chosen not to have biological kids.

A week ago, when Kamala Harris was sworn in as the first woman vice president of the United States, she did so surrounded by young family members. There were her stepchildren, Cole, 26 years old, and Ella, 21; her niece, Meena; and her young grandnieces, Amara and Leila, adorably attired in fur coats as a tribute to a famous picture of Harris as a young girl in the ’70s.

The whole thing had me sobbing. I had not expected to be so deeply and bodily moved. But then, until very recently, never in my wildest dreams had I imagined that someone who looks like me, with whom I share so many traits and life experiences, could hold the second-highest office in the land.

Like Harris’s parents, I am an immigrant. Harris was born in Oakland, where I live. She grew up visiting South Asia; she wears saris and speaks a little of a South Asian language, just like I do. She was 50 when she married her husband, while I was 42, ages considered well past their due date. All of these facts make me feel profoundly represented by her.

Yet there is another extraordinary way in which her choices mirror mine. Like Harris, I’ve chosen not to have biological children. I’m 47 years old now and have known since the question arose in my teens that I did not want to have kids. 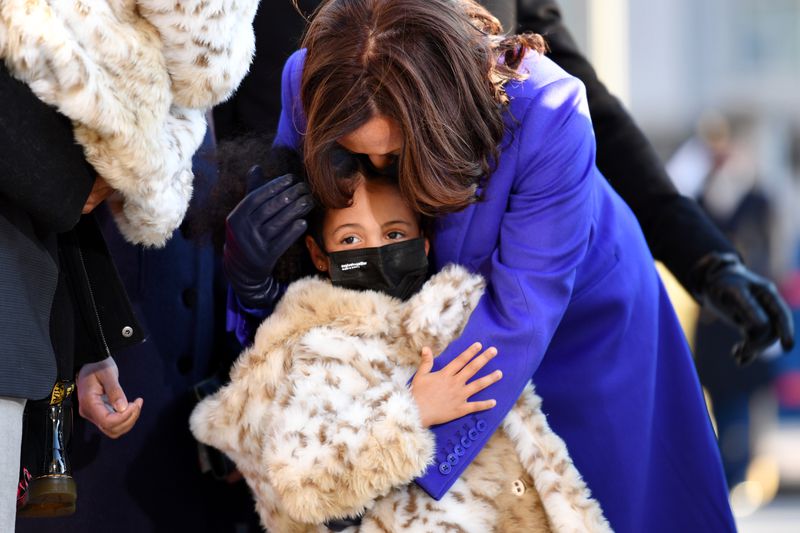 Mark Makela/Getty Images
Vice President Kamala Harris at the inauguration with her grandniece Amara, who is wearing a fur coat as a tribute to a photo of Harris wearing a similar coat as a young girl in the ’70s.

I’m part of a group of women that’s growing — American women are having fewer children, later in life — yet still faces stigma for being outliers in this regard. But it’s particularly unusual to see a woman in politics who doesn’t have biological children. In general, in America, unlike in many other parts of the world, we are still not used to seeing women reach high levels of political office. The few who do succeed in this arena have typically followed a hallowed script in their personal lives: husband, two kids, and a golden retriever. Often their careers have taken off after their husbands’ had reached their pinnacles. Harris’s personal choices have been very different from this traditional and idealized script.

On top of all that, I know intimately the pressure to have children within a South Asian context. Being South Asian American myself, choosing to be childfree was a huge point of departure from my community, which assumed that all women desired marriage and children — and, indeed, that a woman who did not give birth to children would have an unfulfilled life.

Recently while going through a Marie Kondo, I found a letter written to me by an older female relative. It extolled me to start thinking about marriage and, more specifically, having children. “Don’t wait until you are older,” she cautioned. “Then you will be too dried up to get pregnant.” I was 25 years old when I got that letter. I find it a convenient stand-in for the long procession of aunties and uncles who told me that my life would be a failure if I did not give birth to children.

Despite all this noise, I never wavered in my conviction. In 2008, I met the man who would become my husband. We were roommates in a tall Victorian in San Francisco. I was recovering from a messy divorce. At first, we were friends, and then we were more.

Early on, I was very clear. If we did develop into something significant, I was not interested in being a mother. If he wanted children in the future, I should not be his choice. He considered deeply, and he stuck around. We got married in 2015, and six months later he got a vasectomy. At the time, he posted on social media wishing that our choice to not be parents was as celebrated as other people’s pregnancy announcements were. After all, our choice was made after as much soul-searching as was theirs.

Our reasons for not wanting to be biological parents are many. We are simply not the kind of people who can give the selfless dedication that parenthood demands. We love having the freedom to travel, to be quiet when we wish, the financial freedom, and the time to devote to our life’s callings. Perhaps it’s most truthful to say that we simply do not have the energy that folks who want to be parents have.

But there are bigger-picture reasons, too. There is the environmental cost: As a friend pointed out, bringing another American into the world is hugely different from bringing in a human in other places. The devastating environmental footprint of another American is simply is not one we are willing to add to the mix. For all these reasons, we have been clear that we did not want children.

I don’t know the specific reasons Harris didn’t have biological kids. But for me, seeing the vice president’s choices embraced feels liberating.

What is also very clear is that not being a biological mother has not diminished Harris’s life in any way. She has spoken and written warmly about her choices and the importance of her role as a stepmom or — as her stepkids call her — Momala, calling it the title that will “always be the one that means the most to me.”

In an essay for Elle, she wrote of her close friendship with Cole and Ella’s mother, Kerstin, writing that “We sometimes joke that our modern family is almost a little too functional.” We were all witness to the beautiful family she has created in her own specific way on Inauguration Day. We don’t each need to make her choices, but her life illustrates the fact that women can and should live unconventional lives that do not follow traditional scripts. 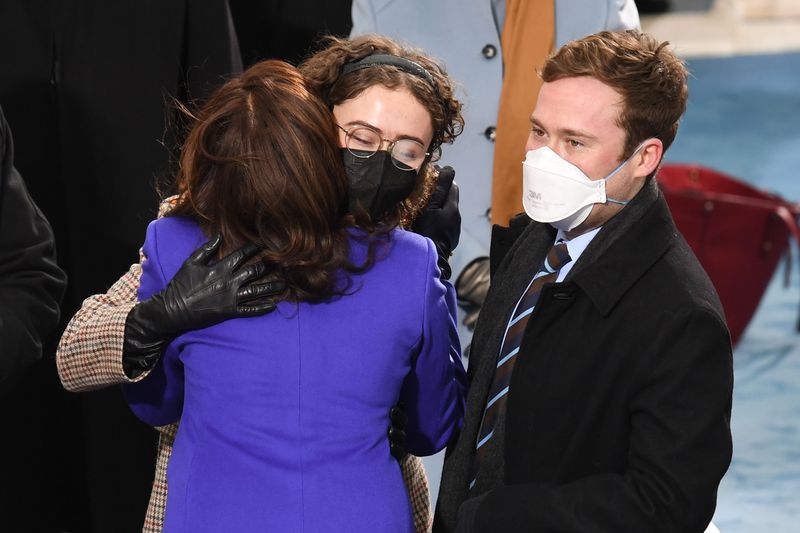 Olivier Douliery/AFP via Getty Images
Harris hugs her stepchildren, Ella and Cole Emhoff, at her inauguration.

In the same vein, the older relatives and acquaintances who felt the need to tell me I would regret not being a biological mother were completely wrong. In not having children, I have had the time, the finances, and the energy to be present as an aunty to so many young ones, including my sister’s two daughters, the children of friends, and many generations of students. This is a state I saw reflected in Harris’s crew at the inauguration. My decision not to be a mother has actually created so much more family in my life, much as the vice president’s choices had.

Nayomi Munaweera is the award-winning author of the novels Island of a Thousand Mirrors and What Lies Between Us.

Source: What Kamala Harris means to women who are childfree by choice