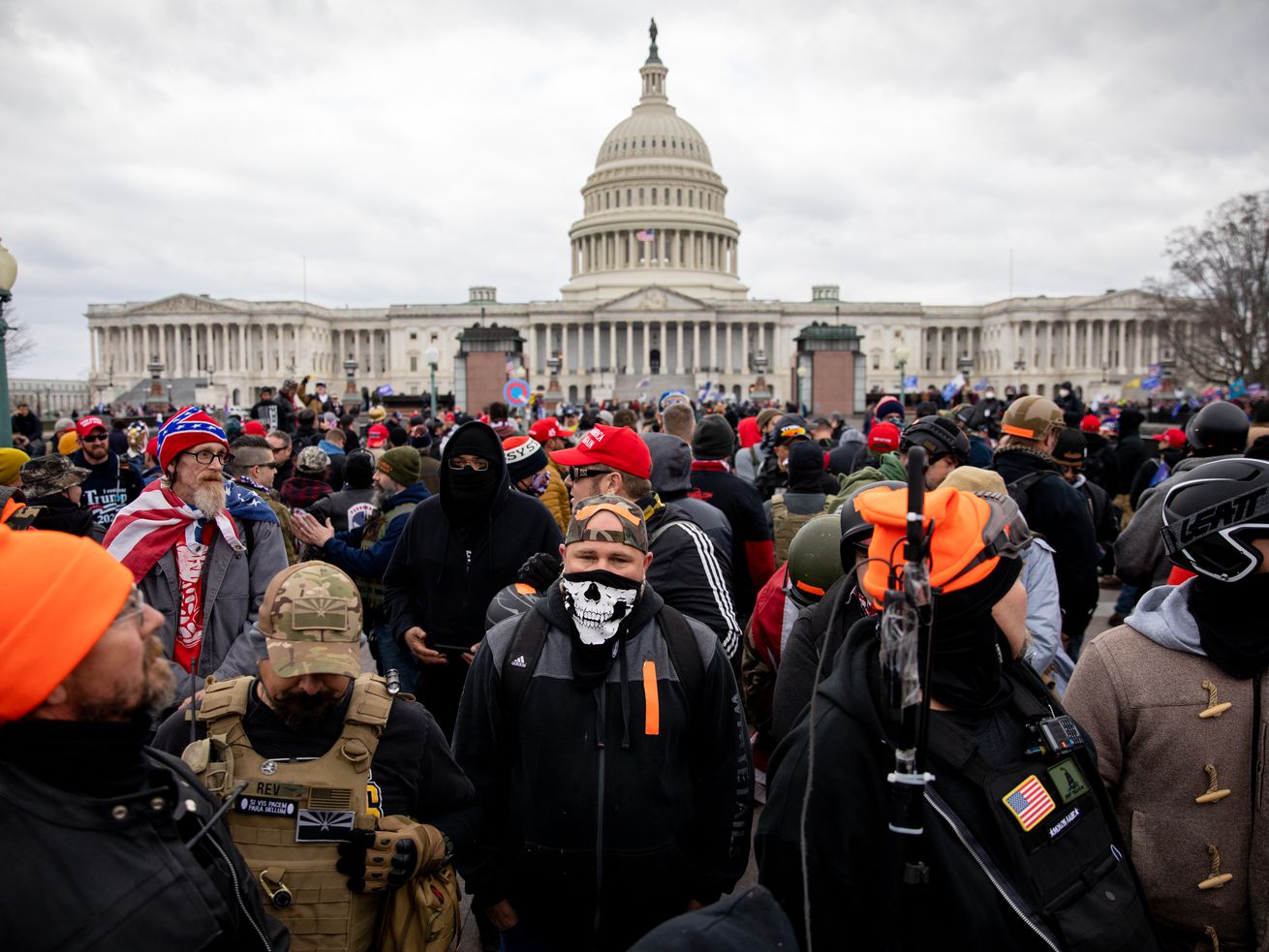 A crowd of Trump supporters in front of the US Capitol on January 6, 2020. | Amanda Andrade-Rhoades/Washington Post/Getty Images

Prosecutors say the men conspired to “obstruct, influence, impede, and interfere with law enforcement” during the riot.

Two members of the Proud Boys, a far-right hate group, have been charged with conspiracy for their involvement in the violent storming of the US Capitol on January 6.

On Friday night, federal prosecutors announced the charges against Dominic Pezzola — 43, of Rochester, New York — and William Pepe — 31, of Beacon, New York — saying they “engaged in a conspiracy to obstruct, influence, impede, and interfere with law enforcement officers engaged in their official duties in protecting the U.S. Capitol and its grounds on Jan. 6, 2021.”

Pezzola and Pepe are not the first members of an organized far-right group to face conspiracy charges. Three members of the Oath Keepers, a right-wing militia group, have also been charged for their participation in the attempted insurrection.

The two Proud Boys had previously faced other, lesser charges; at least four other members of their group face lesser charges as well, including obstructing a congressional proceeding. More than 170 other people have also faced lesser charges, such as for unlawful entry and disorderly conduct, for their part in the bloody incident, which left five people dead and more than 140 police officers injured. At least two police officers who were present during the siege have since died by suicide.

According to a Justice Department press release announcing the charges, Pezzola and Pepe allegedly seized protective equipment from police, including the short metal barricades erected around the grounds of the Capitol. Video from the day shows rioters ripping down that fencing, overwhelming Capitol Police officers. Other video shows some police officers moving barricades themselves.

Pezzola and Pepe are also accused of “the stealing and purloining of property belonging to Capitol Police.” Specifically, Pezzola is accused of stealing a riot shield from a Capitol Police officer and later using it to smash a window of the Capitol building; the release notes he is apparently depicted doing so in video and photos from the day.

Additionally, Pezzola was charged with “obstruction of an official proceeding; additional counts of civil disorder and aiding and abetting civil disorder; robbery of personal property of the United States; assaulting, resisting, or impeding certain officers; destruction of government property; and engaging in physical violence in a restricted buildings or grounds.”

These charges stem from his alleged theft and misuse of the riot shield. Pezzola was also allegedly part of the mob of mainly white men who were led on a chase by Eugene Goodman, a Black Capitol Police officer, who sought to keep the insurrectionists away from lawmakers. The pursuit was captured on video, and led to praise and a position of honor at Biden’s inauguration for Goodman.

Two Montana brothers who also allegedly chased Goodman were charged Friday with nine counts, including destruction of property, related to their role in the siege.

According to the New York Times, Pezzola is a former US Marine, and Pepe worked for the Metropolitan Transportation Authority. Both were affiliated with the Proud Boys, which promotes “Western culture” as a front for racist, xenophobic, and anti-Semitic ideologies.

The group openly and enthusiastically backed former President Donald Trump throughout his term in office, and Trump declined to condemn them and other white supremacist organizations during a debate with now-President Joe Biden in October.

Instead, Trump encouraged the group to “stand back and stand by.” That phrase was taken up as encouragement, and almost immediately landed on official merchandise for the group.

In the weeks and months after Trump lost his reelection bid, Proud Boys have been a recurring presence at so-called “Stop the Steal” protests, which falsely claimed that the national election had been stolen by the Biden camp. Some of these protests turned violent, with multiple people stabbed in Washington, DC and one person shot in Washington state during rallies in early December that also featured Proud Boys assaulting counterprotesters and passersby, as well as desecrating Black churches.

According to the Times, Pezzola is being represented by attorney Michael Scibetta, who said Friday night that he has not been able to see his client or the federal charging papers.

Conspiracy is the most serious charge faced by insurrectionists so far

Less than a week after the insurrection, federal law enforcement officials promised that arrests would continue, and that initial charges — then limited to things like theft of public property and violent entry — were “only the beginning.”

Indicting members of hate groups on federal conspiracy charges — as opposed to the more easily-proven unlawful entry and disorderly conduct charges — represents a push by the DOJ to keep that promise, and to prove the insurrectionists collaborated in efforts to break the law.

Generally speaking, federal conspiracy charges can carry a maximum penalty of five years in prison, although this sentence can be compounded by other offenses.

Notably, two people do not need to know one another’s identity in order to have conspired together — so even participants in an online forum, on which real names are not exchanged, can be charged as co-conspirators. Moreover, the specific role each conspirator was meant to play does not need to be proven — only that a particular federal crime was planned, and then occurred.

One question in proving a conspiracy case is likely to be to what extent the January 6 riots were planned in advance.

According to the New York Times, federal investigators have found evidence in Pezzola’s home suggesting he had been studying homemade explosives. There is less public evidence against Pepe, and Pepe’s attorney, Susanne Brody, declined comment about the case against Pepe to the Times and CNN.

But there is evidence to support the argument that there was advance planning for the action at the Capitol. As Rebecca Heilweil and Shirin Ghaffary of Recode have reported, online extremists began organizing for offline action almost immediately after the November 3 presidential election.

On both mainstream social media and the smaller platforms favored by far-right extremists, members of the mob planned their trips to Washington well in advance of the violence that eventually unfolded. And those same services hosted livestreams and videos of the insurrection; Pezzola, for example, filmed himself smoking a “victory” cigar from inside the Capitol.

It will ultimately be up to federal investigators and the judicial system to determine whether online chatter — or even in-person actions on the day of the riot — will translate to convictions on conspiracy charges. According to court documents reported by the Washington Post, Assistant US Attorney Erik Kenerson described Pezzola’s actions as showing “planning, determination, and coordination.”

So far, three other people have also been charged with federal conspiracy in connection with the Capitol riots. On Wednesday, the DOJ announced that charges had been brought against Jessica Marie Watkins and Donovan Ray Crowl, both of Champaign County, Ohio; and Thomas Caldwell of Clarke County, Virginia for “conspiracy, obstructing an official proceeding, destruction of government property, and unlawful entry on restricted building or grounds.”

All three are affiliated with Oath Keepers, an anti-government paramilitary organization founded shortly after the election of former President Barack Obama. According to the New York Times, at least 10 other people bearing insignias of that far-right group were spotted during the riots.

Watkins and Crowl are also members of an Ohio-based militia, according to the DOJ press release. The three indicted Oath Keepers are alleged to have communicated with one another both before and during the attack on the Capitol. They face up to 20 years in prison.

Source: Two Proud Boys have been charged with conspiracy in the US Capitol insurrection