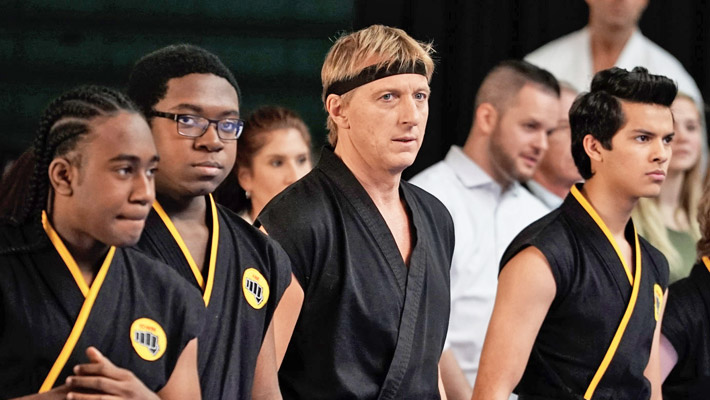 One of the best running jokes of Cobra Kai (including within its infuriatingly good third season) is how bad Johnny Lawrence is at the Internet. To his credit, he finally learned how to log in (and even send a message on “The Facebook”), which led him to a very special reunion. Still, one really can’t expect him to be able to navigate the streaming wars, but if anyone really wants to know what William Zabka’s character is doing to ride out this pandemic winter, the Cobra Kai writers have got you covered.

“Send it to the internet!” would be the shout heard inside the dojo, but as one might expect, things aren’t too sophisticated for Johnny at home. Via Entertainment Weekly, here are some tips that the Cobra Kai creative team crafted. The first one here isn’t the worst idea, but things get messier from there:

– “Fire up that VCR and let Sly take you away. If you start watching Rocky III, Demolition Man, Rambo II, Cliffhanger, Rocky IV, Tango & Cash, and Over the Top at midnight on Valentine’s Day, Stallone wins a semi rig just in time for St. Patrick’s Day.”

– Stop ordering food from some guy’s car on your smartphone app. Bologna is nature’s way of thanking us — and it’s good with pretty much everything. I fry mine in butter. But you can eat it cold with pickles. If you have people over, melt some Velveeta on top and make it fancy. You’re welcome.”

Velveeta sure makes everything fancy. The tips only spiral further, including Johnny’s recommendations for reading material (with lots of “babes”), mixology, and fitness when the power goes out. Viewers might also remember that Johnny and warm beer are quite the Easter egg, but hey, we need input like this to stare down the time we’ll have to wait for Season 4 to materialize. In the meantime, the More Than Miyagi documentary on Pat Morita will arrive via iTunes, Amazon, Vudu, and Google Play, on February 5

Source: ‘Cobra Kai’s Johnny Lawrence Has Some Advice That You Probably Shouldn’t Follow For Riding Out The Rest Of Winter