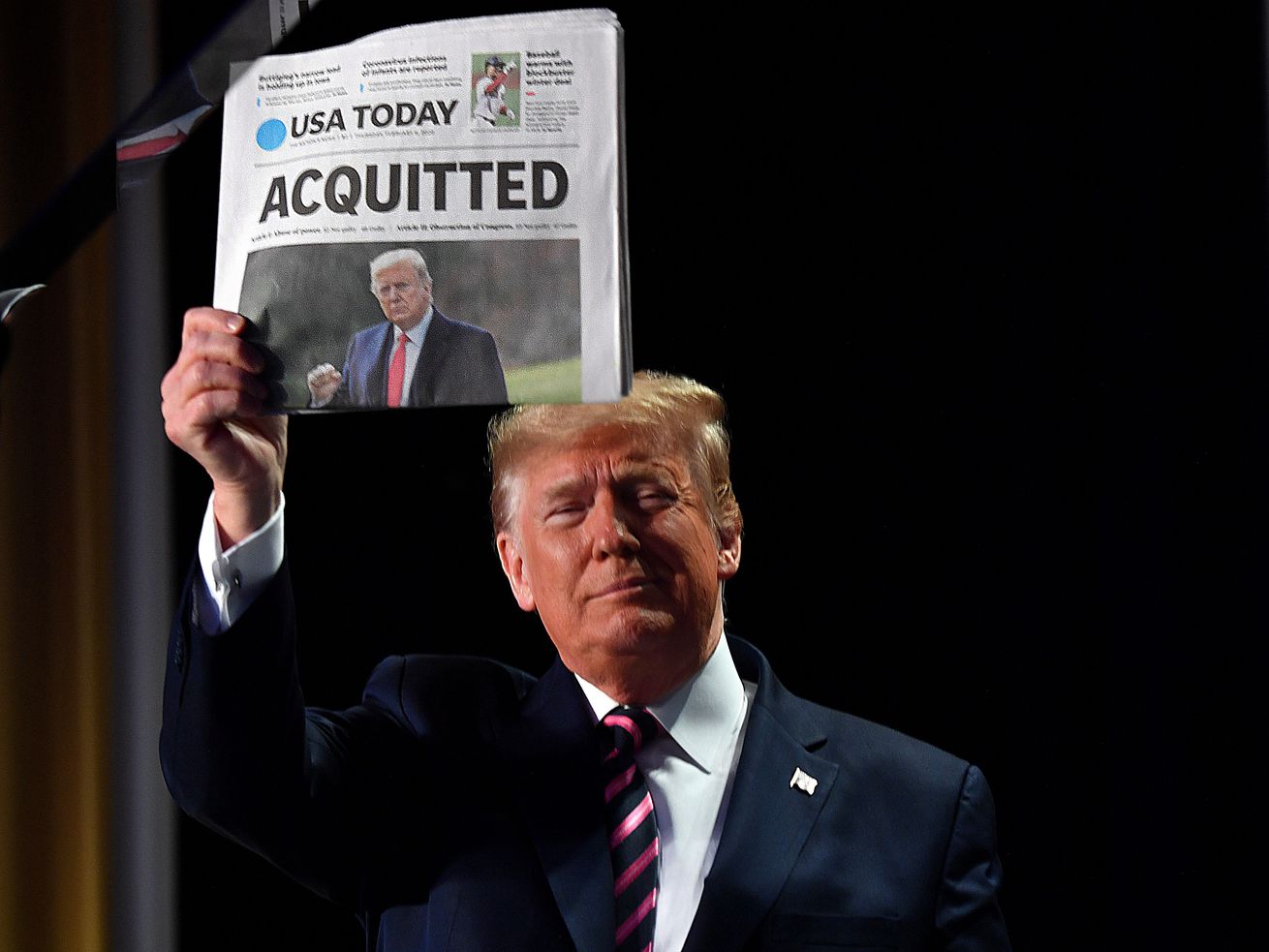 Trump holds up a newspaper with the headline “ACQUITTED” last February, shortly after the conclusion of his first impeachment trial. | Nicholas Kamm/AFP via Getty Images

Trump has new lawyers. But in the eyes of Republican senators, it doesn’t really matter.

After recently losing most of his defense team, former President Donald Trump seems to have finally nailed down attorneys to represent him during his second impeachment trial, slated to begin a week from today.

Trump’s representatives announced on Sunday night that the former president’s lead lawyers for the trial — which will examine Trump’s role in inciting the January 6 insurrection at the Capitol that left five people dead, including a police officer — will be trial attorney David Schoen and Bruce Castor Jr., a former district attorney in Pennsylvania. As the Washington Post details, Schoen and Castor bring a bit more legal heft to the table than someone like Rudy Giuliani, but still come with significant baggage:

Schoen previously served as a lawyer for Trump adviser Roger Stone when he sought to appeal his conviction for lying and witness tampering in a congressional investigation. He also was in discussions with financier Jeffrey Epstein about representing him days before his death while awaiting sex-trafficking charges and has said he does not believe Epstein killed himself. During his time as district attorney, Castor had declined to prosecute actor Bill Cosby and was later sued by accuser Andrea Constand in a case that was settled.

Trump’s previous legal team, which was led by Karl “Butch” Bowers Jr., fell apart on Saturday. CNN’s Kaitlan Collins reported that Bowers’s team resigned because “Trump wanted the attorneys to argue there was mass election fraud and it was stolen from him rather than focus on proposed arguments about constitutionality.”

One can understand Bowers’s frustration with Trump’s desire to use the impeachment trial as a forum to relitigate his long-debunked lies about the election, particularly given that a constitutionality argument has an incredibly high likelihood of success: A critical mass of Republican senators have already indicated they’re prepared to acquit Trump on grounds that holding an impeachment trial for a president who has already left office is unconstitutional.

As Vox’s Ian Millhiser details, many legal experts — including the nonpartisan Congressional Research Service — disagree with the GOP position, and believe Congress has the authority to try a former president. But Republican senators seem unwilling to engage with the question of Trump’s role in what happened on January 6, and instead appear to be more interested in finding a pretext to absolve Trump and other Republicans who pushed big lies about the election of any responsibility for the insurrection.

The reality is it matters little who’s on Trump’s legal team. With Republicans nearly united in opposition to his conviction, the former president could be represented by anyone and still end up acquitted.

The Republican base still backs Trump. And GOP lawmakers do, too.

That Trump’s second impeachment trial is almost certain to conclude like the first one — with a bipartisan vote to convict, but with a sufficient number of Republican senators voting to acquit (a two-thirds vote is needed for conviction) — became clear last week when all but five of the 50 Republican senators voted in favor of Sen. Rand Paul’s (R-KY) objection to the constitutional basis for the trial.

That vote came as Paul did a right-wing media tour in which he lied about the timeline of Trump’s second impeachment and refused to acknowledge the reality that President Joe Biden’s victory over Trump was legitimate.

It’s not clear whether Trump’s new legal team will indulge him and turn the trial into a forum for him to spread lies about the election. But Paul’s constitutional objections, as specious as they may be, provide Republican senators with a readymade rationale to vote to acquit a former president who remains very popular with the Republican base even while his approval more broadly collapses.

Democratic impeachment managers, meanwhile, are busy putting together a painstaking case for Trump’s guilt. It will include video footage from the insurrection that took place immediately after he delivered an angry speech in which he invoked “fighting” more than 20 times, and at the end of a two-month period in which he relentlessly pushed lies meant to undermine the election. The Washington Post reported last week that Democrats’ “effort to present new video evidence and witness testimony appears designed to make Republican senators as uncomfortable as possible as they prepare to vote to acquit Trump, as most have indicated they will do.”

A conviction could bar Trump from running for the presidency again. Leading Republicans, such as House Minority Leader Kevin McCarthy and Senate Minority Leader Mitch McConnell, initially denounced Trump for his role in the insurrection, but their tone has shifted as time has passed (McConnell, for instance, voted in favor of Paul’s aforementioned objection) — indicating that if Trump wants to run again, and wins the Republican primary, he likely won’t have to worry too much about the party unifying behind him.

Trump’s camp releases this photo from his meeting with McCarthy today pic.twitter.com/uJaA2FN5a0

Given the unprecedented, multipronged effort to overthrow a presidential election that the United States just endured — one that culminated in the January 6 insurrection — a Trump 2024 campaign would likely end up being in opposition to the democratic system itself.

But even as Trump has struggled to put together a legal team, Republican senators have already made it clear that they have little interest in weighing the evidence, let alone voting to convict. As always, presented with an offramp to distance themselves from Trump, Republicans are refusing to take it.