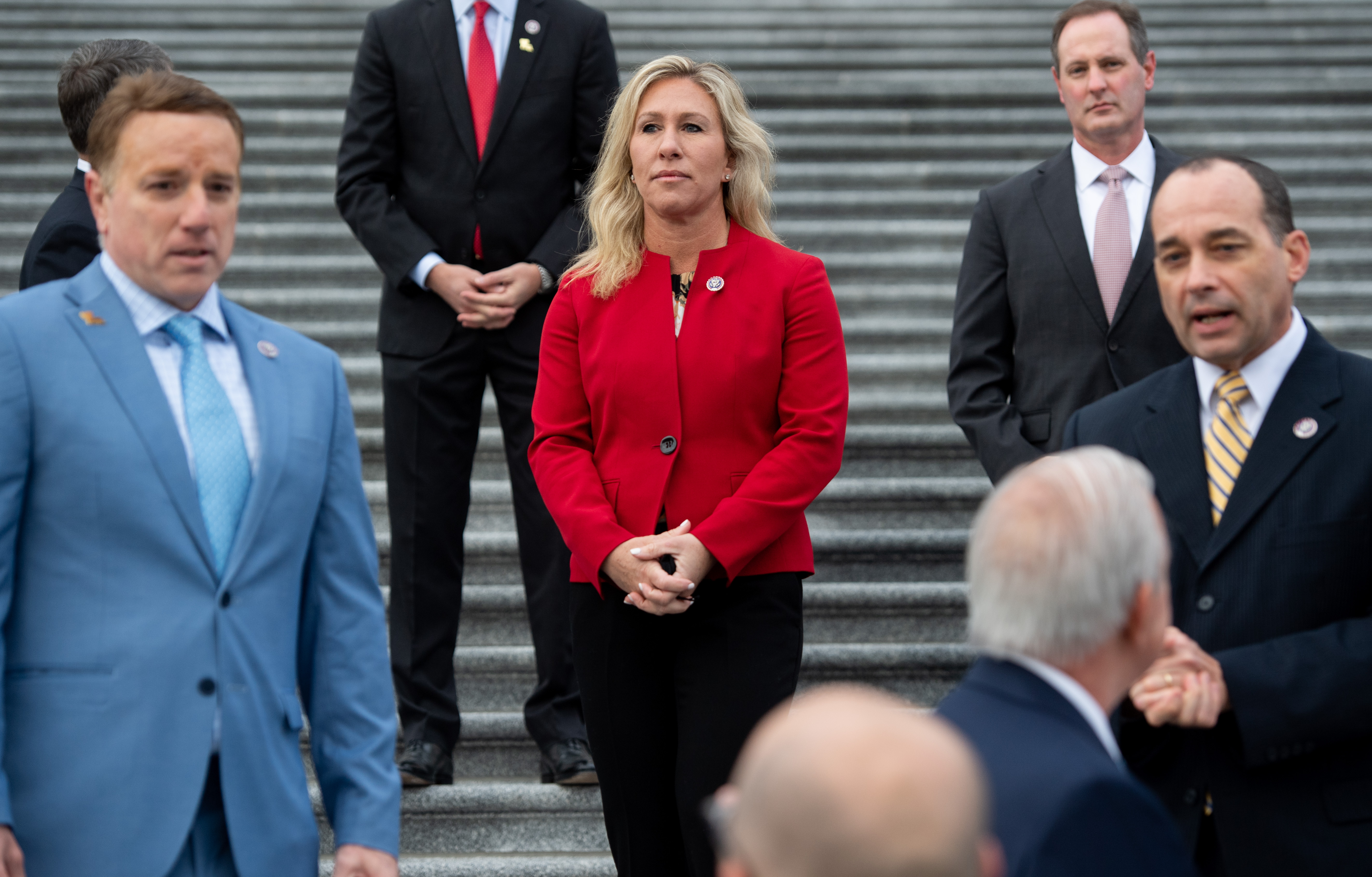 The House of Representatives will vote Thursday on whether to remove Marjorie Taylor Greene, a freshman Republican lawmaker from Georgia, from her committee assignments. Steny Hoyer, the number-two Democrat in the House, announced the move after his GOP counterpart signaled that his caucus would not sanction Greene on its own. “I spoke to Leader [Kevin] McCarthy this morning, and it is clear there is no alternative to holding a Floor vote on the resolution to remove Rep. Greene from her committee assignments,” Hoyer wrote on Twitter on Wednesday. “The Rules Committee will meet this afternoon, and the House will vote on the resolution tomorrow.”

Removing a member of Congress from their committee assignments isn’t an unprecedented sanction, but it is an extraordinary one. Lawmakers have previously lost their posts on committees for being investigated for federal crimes or indicted on federal charges. House Republicans stripped former Iowa Representative Steve King of his assignments in 2019 for openly defending white nationalism and white supremacy, a move that foreshadowed his electoral defeat in last year’s primary race.

Thursday’s vote is a signal moment for both Congress and the House Republican caucus. It gives the legislature a chance to anathematize a lawmaker’s views and insulate the legislative process from their dishonor. It gives Republicans a chance to distance themselves from her hateful views, an opportunity that few will likely take. And for Greene herself, it’s a terrific opportunity. She has shown virtually no interest in substantive policy matters or passing legislation: Now she’ll be freed from the burden of pretending otherwise.

Before joining Congress, Greene was one of the countless right-wing figures who built an audience on social media platforms by making steadily more incendiary claims. She embraced the QAnon movement, whose followers eagerly await the mass arrest and execution of Donald Trump’s political opponents, and other fantastical conspiracy theories. She has questioned whether a plane actually struck the Pentagon during the September 11 attacks. She suggested that the Parkland, Florida, school shooting in 2018 was a false-flag operation by Democrats who wanted to impose gun-control measures. In one incident, she filmed herself harassing David Hogg, a former Parkland student and gun-control activist, outside the Capitol building in 2019, describing him as a “coward” and accusing him of being funded by liberal billionaire George Soros.

Greene’s extreme views were partially known during the election last year. Since the January 6 riots, however, Greene has received renewed scrutiny for her extremism. She reportedly signaled support, on Facebook, for murdering Speaker Nancy Pelosi and other Democratic lawmakers in 2018. She previously shared antisemitic propaganda on Facebook and described the Democratic victory in the 2018 midterms as a “Islamic invasion of our government.” In a particularly wild post from November 2018, Greene even insinuated that a Rothschild investment bank and its co-conspirators may have used orbital lasers to ignite deadly wildfires in California to clear land for high-speed rail.

As is typical for the Trump-era GOP, Greene hasn’t expressed regret or remorse for her previous statements. She and her allies have instead denounced the proposed sanctions as “cancel culture,” a rhetorical trick that obfuscates a person’s wrongdoing by shifting the focus to the consequences that they face. Conservative media outlets and some congressional Republicans have drawn false equivalences between Greene and Democratic lawmakers like Alexandria Ocasio-Cortez and Ilhan Omar, with some GOP members pushing for Omar to be removed from her committees as well.

Why is the threat to remove Greene from her committees so effective? Ironically, it’s because Congress is institutionally broken. As I’ve noted before, the House centralizes too much power in its own leadership, no matter which party is in charge. The effect can be demoralizing and disempowering for rank-and-file members of the majority party; it’s even worse for members of the party that’s out of power. Fundraising pressures and procedural logjams give House lawmakers, especially newer ones, a strong incentive to raise their national profile through performative gestures instead of by drafting and passing legislation.

Democrats aren’t immune to this dynamic, of course. But the right-wing media environment makes it particularly strong among Republicans. Greene is one of many freshmen GOP lawmakers who seem more interested in being an influencer of some kind than a legislator. Colorado’s Lauren Boebert spent January filming videos about carrying guns in Washington and trying to bring them into the Capitol building—something that doesn’t materially affect Americans’ lives but plays well on Fox and Newsmax. Madison Cawthorn, who urged supporters to “lightly threaten” members of Congress in December, even told colleagues last month that he “built [his] staff around comms rather than legislation.”

Indeed, there are few signs that Greene is actually interested in substantive legislative work. Most of the bills that she has co-sponsored so far appear to be written to burnish their backers’ culture-war credentials rather than to become federal law. Congress has already been in session for a month, and Greene has only been the primary sponsor of one piece of legislation: an article of impeachment against President Joe Biden that was filed on his first full day in office. Accordingly, removing Greene from her committee assignments would probably be more of a loss for Greene herself than for Georgia’s 12th congressional district and her constituents.

Against this backdrop, why didn’t House Republicans move to remove Greene from her committee assignments themselves? One factor is McCarthy’s weak leadership of his caucus, especially when it comes to its most extreme members. Another is some reported concern about the precedent it might set. But the simplest explanation is the most straightforward one: They just don’t want to do it.

After all, the House GOP caucus is more than willing to move against members who step over the line. It’s just not the line that most Americans think it is. Even while they resist sanctions for Greene, the same House Republicans are moving to oust Wyoming Representative Liz Cheney for having the temerity to vote to impeach Trump for inciting an attack on Congress. If they succeed and are looking for a lawmaker to replace Cheney who better represents their future, they might as well consider Marjorie Taylor Greene. After Thursday, she might have even more time to devote to it.

Source: Everyone Wins If the Republicans Banish Marjorie Taylor Greene—Including Her