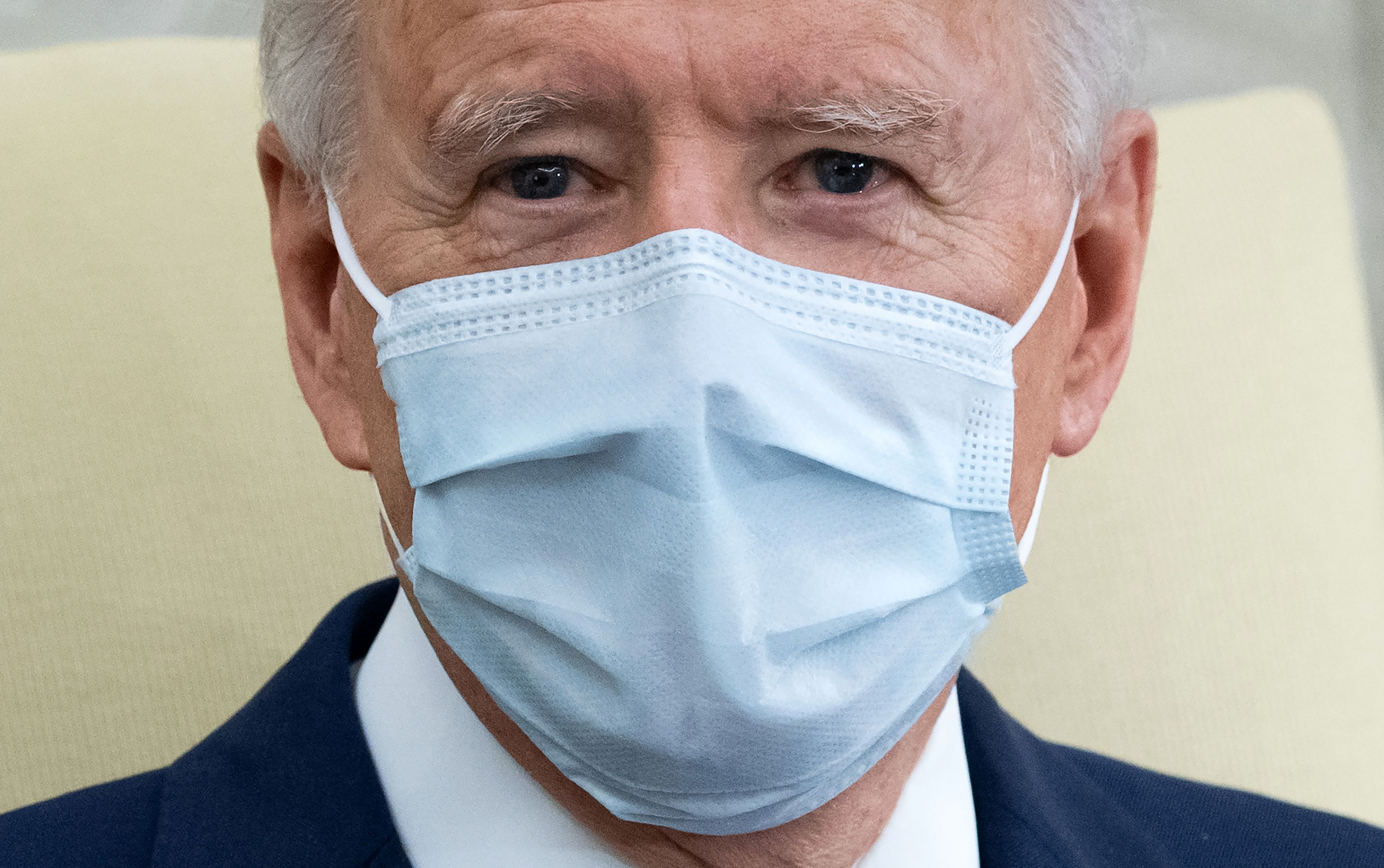 President Joe Biden made the Defense Production Act a key part of his campaign coronavirus platform. He began calling for the act to be invoked to boost mask production in March 2020. On his first full day in office, he spoke of a “full-scale wartime effort to address the supply shortages by ramping up production of protective equipment, syringes, needles, you name it.” His executive order that afternoon directed all federal agencies and private industry to use the DPA to accelerate the production of “everything needed to protect, test, vaccinate, and take care of our people.” The White House has called the order one of several “historic actions” already taken by the Biden administration.

But so far, U.S. agencies have not used the DPA to produce vaccines. Since May 2020, officials have used it to a limited extent—18 times in all—to help outfit production lines with special tools, to invest in glass vials and syringes, and to procure some vaccine ingredients like sucrose and lipids. Government specialists have also been dispatched to manufacturing facilities to help solve bottlenecks. But experts say the act, and other U.S. laws, could be much more broadly applied to tackle supply and manufacturing issues. In the meantime, the pandemic is growing worse.

The DPA, first created for military production purposes during the Korean War, has since been expanded to include public health crises and other emergencies, such as the federal response to the devastating hurricane in Puerto Rico. It allows the United States to cut in line for necessary materials, requiring companies to prioritize filling the federal government’s contracts before any others. The Trump administration used the DPA hundreds of thousands of times to fund defense projects quickly, but Trump was loath to use it to address the coronavirus crisis. Trump said he only signed an order allowing the use of the act for the pandemic in March “should we need to invoke it in a worst case scenario in the future,” adding that “hopefully there will be no need.” Trump was wary of government involvement in the private health care industry, preferring to use the DPA as a negotiation tool instead of compelling companies to act in the government’s interest. But experts say that relying on the market to solve a global pandemic was a missed opportunity to stem the crisis before it worsened.

Given Biden’s early and frequent support of the act, it’s surprising that it has not yet been put into wider use, experts told me. “These are minor, moderate steps, but by no means the kind of scope that’s needed right now,” said Brook Baker, a professor focusing on intellectual property and access to medicine at Northeastern University School of Law. “With the new variants that we’re seeing, it’s even clearer that we need to have basically a major D-Day kind of effort to increase vaccine manufacturing globally, or we’re all going to be vulnerable to new variants, whether we’ve been vaccinated or not.” Widespread vaccination could slow the virus’s transmission and thus mutation, he said.

Solving supply shortages is “exactly what the DPA was designed for,” Deborah Pearlstein, a professor at Yeshiva University’s Cardozo School of Law, told me. Many companies would likely embrace wider DPA implementation to help overcome manufacturing shortages, she said. Pfizer, for instance, began asking U.S. officials to invoke the act on its behalf back in September, to help procure nine or so ingredients it needed to increase production of the vaccine. The company was reportedly “unhappy” with the government’s lack of response, with one insider saying it had delayed the timely production of more doses. In late December, however, the company committed to delivering another 100 million doses to the U.S. this year.

It’s possible, Pearlstein said, that companies have found ways to reach agreements and prioritize supplies without the U.S. invoking the act. “Perhaps the issue was not so much unavailability of supplies but failure of coordination,” she said. The extent to which the DPA has been used has remained quite murky; even experts on the law aren’t sure how, or how often, it’s been invoked for Covid-19. On Tuesday, for instance, the Biden administration announced it had reached a deal with a company providing more efficient syringes to help maximize each vial of vaccine, but it did not say whether the DPA was used to procure supplies.

The DPA can give the executive branch broad control over a company’s products—for instance by preventing it from selling vaccines to other countries first. But requiring companies to deliver their finished products to the U.S. first raises ethical issues, Pearlstein pointed out. Everybody on the planet wants and needs the vaccine, Pearlstein said. “If I were the administration, I would be, at least, thinking—and I’m sure they are—about equity issues.” The Director-General of the World Health Organization, Dr. Tedros Adhanom Ghebreyesus, has repeatedly called for an equitable distribution of vaccines around the world. “Vaccine nationalism harms everyone and protects no one,” he argued on Tuesday—an argument that’s only gotten more compelling as more transmissible variants that don’t respond as well to vaccines spread between countries. The Reverend Dr. Thabo Cecil Makgoba, Anglican Archbishop of Cape Town, urged U.S. health officials in a letter to ramp up global production and to share the vaccine technology and manufacturing know-how with the rest of the world. Without ambitious actions like these, he wrote, “we are on the road to a global disaster.” Amnesty International and Human Rights Watch also said recently that the rights to life and health demand “extraordinary cooperation” around the world.

Beyond aggressively expanding the DPA to overcome supply-chain issues, the U.S. could speed global vaccination in a more unusual way: tapping into patent laws that would allow any manufacturer in the world to produce the vaccines. Baker thinks that should happen immediately. “All existing capacity of major producers that can be repurposed, should be repurposed,” he said: Companies that own the vaccines should “basically agree to open their books” and share their knowledge of producing the vaccine, which would mean they would choose not to enforce patent laws or trade secret rights.

Vaccine makers have reached some voluntary agreements with other manufacturers around the globe to help them produce the vaccines. “But they haven’t done that enough to really increase supply to the extent that’s needed,” Baker said. Other countries, including lower- and middle-income countries where the virus is circulating, could also manufacture the vaccines. “We always hear technology transfers are too hard, it takes too long. It doesn’t if you have the will. It doesn’t if you really have the need,” Baker said.

“The emergency has been clear from the beginning, but there are new risks because of the variants that make it even more urgent.”

“A lot of this could be done voluntarily. And I hope that, through a strong show of will and a little bit of a threat in the back pocket, President Biden could convince companies that instead of artificially limiting manufacturing to their own facilities and their own contract manufacturers, they really ought to open it up,” Baker said. “The emergency has been clear from the beginning, but there are new risks because of the variants that make it even more urgent.” If vaccine makers do not want to enter these agreements, the U.S. could go a step further and compel them to do it, through 28 U.S.C. section 1498, which grants the government a “concurrent use license” that would allow someone else to manufacture the vaccines.

Defenders of strict patent protection tend to argue that preserving intellectual property spurs innovation, and infringing upon a company’s patent rights might make companies less likely to develop a vaccine quickly next time. But that’s a questionable position in this case, where the federal government already intervened in multiple ways to encourage quick vaccine development, and where the arguments in favor of releasing the patents are particularly strong given the unprecedented global emergency.

“There’s no commercial justification for the companies not to transfer the technology, because they can’t make enough to meet global needs,” Baker said. It’s not like companies would be missing out on potential sales or giving their competitors an advantage, he argued. “All these companies love their intellectual property, and all of them love to have total control over manufacturing and distribution, and they like to have control over price,” he said. “But that doesn’t mean it’s good for society. In the long run, the whole economy is suffering massively—what, to protect the intellectual property rights of a couple handfuls of companies? It just doesn’t make any sense.… At some point, public health and public interest trump those private interests.”

If moral arguments for saving as many lives as possible fail to convince leaders, there are epidemiological and economic reasons, as well. The more people the coronavirus infects, the more opportunities it has to evolve into more contagious and deadly variants. And viruses tend to mutate more once some people are vaccinated, as the virus tries to find ways around immune responses. That means all Americans could become fully vaccinated, but if the virus continues to spread unchecked elsewhere, it could mutate until the vaccines no longer work effectively—mutations that have already begun occurring. An unprecedented effort to vaccinate wide swaths of the globe could help halt the vast majority of mutations. “And if this virus continues to circulate, the major recession we’re experiencing right now will turn into a full-blown global depression that would take decades to reverse,” Baker said. A recent report from the International Chamber of Commerce estimated that the global cost of distributing vaccines inequitably will be $9.2 trillion, about half of which would be borne by rich countries like the U.S. “We can’t just put a moat around ourselves,” Baker said.

More than a year has passed since SARS-CoV-2 began spreading around the globe, and the effects have been devastating. Allowing the virus to spread more, without throwing every resource at stopping it now, means the virus will exert more control over our lives for even longer. Researchers are still learning about how long immunity lasts, and whether or how often we will need booster shots to protect against the virus. The world will need significant vaccine manufacturing capabilities for years to come, and the sooner those in power take action, the faster we will be able to end the pandemic once and for all.

Source: Biden Is Missing an Obvious Solution to Speed Up Vaccine Production