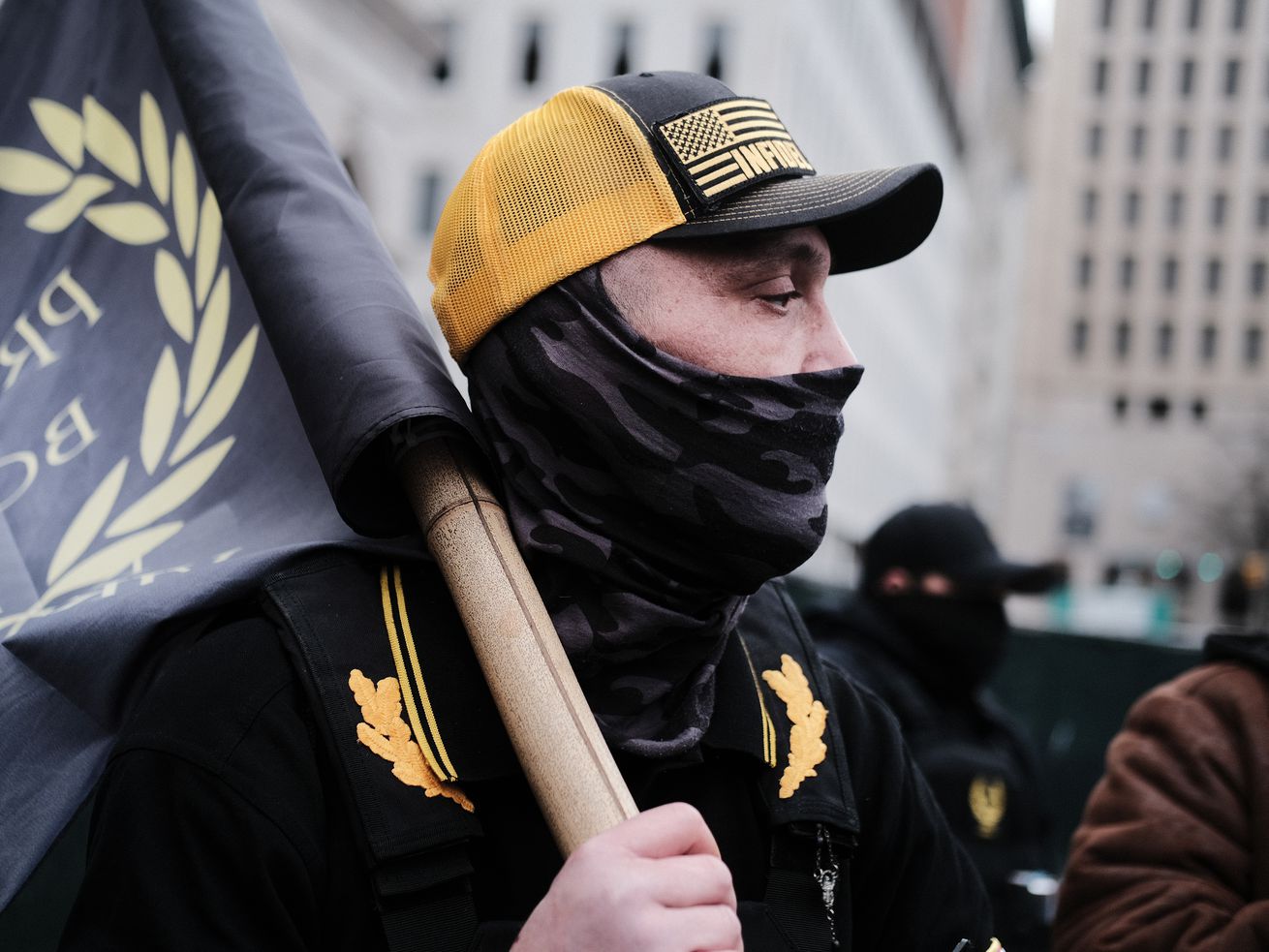 Members of the Proud Boys join other gun rights advocates in front of the State House as pro-gun supporters gather on January 18, 2021, in Richmond, Virginia.  | Spencer Platt/Getty Images

It’s not clear whether the Biden administration will follow suit.

The Canadian government has designated the Proud Boys, a far-right hate group, as a terrorist organization in the wake of its involvement in the January 6 insurrection at the US Capitol.

The Canadian government cited the group’s engagement in violence against Black Lives Matter protesters as well as its “pivotal role” in the insurrection as reasons behind the designation.

The designation will allow the Canadian government to turn away members of the Proud Boys at the border and remove their internet postings within Canada, as well as impose penalties on anyone who deals with their property or finances. While the group was founded in 2016 in the US, where it remains most prevalent, there are semi-autonomous chapters based in Canada.

“Violent acts of terrorism have no place in Canadian society or abroad,” Canadian public safety minister Bill Blair said in a statement. “Canadians expect their government to keep them safe and to keep pace with evolving threats and global trends, such as the growing threat of ideologically motivated violent extremism.”

Canada’s decision to designate the Proud Boys as a terrorist group has put pressure on US authorities to do the same. White House press secretary Jen Psaki said Wednesday that the Biden administration’s national security team is currently examining “violence and this type of concerning group activity across the country” and will make a determination as to how to proceed once that review is complete.

The Congressional Research Service has asserted that the Capitol insurrection was an act of domestic terrorism, as defined by federal regulations and law, and noted that the FBI has identified the criminal activity by the Proud Boys to pose a domestic terrorism threat. But the US government currently does not formally designate domestic groups as terrorist organizations — that designation is reserved for foreign actors.

Former President Donald Trump previously called for the militant left-wing group antifa to be designated as a domestic terrorist group, but that would have required creating a new legal mechanism. It’s possible that Congress could pass a law creating that mechanism, but that would raise concerns about the government using the designation to infringe on First Amendment free speech rights and target certain ideologies. Should the Biden administration want to designate the Proud Boys as domestic terrorists, they would likely face the same quandary.

Members of the Proud Boys are being prosecuted for their role in the events leading up to and including the Capitol insurrection.

The group’s leader, Henry “Enrique” Tarrio, was arrested two days before the insurrection for allegedly burning a Black Lives Matter banner that was stolen from a church in northwest Washington, DC, following a “Stop the Steal” rally in December. When he was arrested, police found him in possession of two high-capacity firearm magazines. He was consequently charged with destruction of property and possession of a high-capacity feeding device.

Two additional members — Dominic Pezzola and William Pepe, both of New York — were charged with conspiracy last week for storming the Capitol building. Federal prosecutors said that they “engaged in a conspiracy to obstruct, influence, impede, and interfere with law enforcement officers engaged in their official duties in protecting the U.S. Capitol and its grounds on Jan. 6, 2021.”

The group has vocally supported Trump and his efforts to overturn the results of the 2020 election, making appearances at various “Stop the Steal” rallies nationwide. Trump infamously refused to denounce them and other white supremacist organizations during a presidential debate with now-President Joe Biden in October, instructing them to instead “stand back and stand by.” Trump later downplayed the statement, but many in the group took it as a command, embracing it as a rallying cry and put it on their official merchandise.

Source: Canada has designated the Proud Boys as a terrorist organization